Indonesia may increasingly favor US crude as Jakarta tightens belt

The Indonesian government has slashed Pertamina’s crude import allowance for 2020 as Jakarta extends its efforts to lower the country’s current account deficit, strengthening the impetus for the state-run refiner to pick up more US crude as light sweet North American grades come much cheaper than Southeast Asian feedstocks.

Earlier this month, the government ordered Pertamina to cut its crude oil and condensate imports by 30 million barrels in 2020, the Energy and Mines Ministry’s acting oil and gas director general Djoko Siswanto said.

The reduction in import quota suggests the state-owned oil and gas entity is only allowed to buy a total of around 50 million barrels of refinery feedstocks this year, down from around 80 million barrels purchased in 2019.

Jakarta’s growing emphasis on improving the trade balance would further encourage Pertamina to search for the most economical crude import sources this year — and the US may provide the answer, industry officials and trading sources said.

Pertamina bought its first cargo of US crude in the second quarter of 2019. A company source told S&P Global Platts that around 700,000 barrels of light sweet WTI Midland crude arrived in Indonesia in early June. The state-run company was said to have received another cargo of US crude in late Q4 last year.

Its growing appetite for light sweet North American crude comes as little surprise as WTI continues to trade at a steep discount against most regional and some West African grades that the company typically buys.

“[The government’s drive to cut] import bills means that Pertamina may buy less regional grades that are seen very expensive … with the same money spent, more US barrels can come,” said a feedstock trading manager at the state-run company, who declined to be named.
CHEAPER OPTION

The outright price spread between WTI Magellan East Houston, or MEH, on a CFR Asia basis and Malaysia’s light sweet Kikeh crude on an FOB Malaysia basis has averaged minus $2.21/b to date in January, and averaged minus $2.20/b in Q4, Platts data showed.

The spread between WTI MEH on a CFR Asia basis and Brunei’s Seria Light crude official selling price averaged minus $2.14/b for November. The spread for December could not be calculated as Brunei Shell has yet to release its OSP for cargoes loaded last month. Brunei Shell is a 50:50 joint venture between the Brunei government and Shell.

Pertamina imported a total of 212,000 b/d of crude oil and condensate in 2019, making up around 23% of the state-run refiner’s total feedstock requirements. Pertamina said last year’s import volume was more than 30% lower than total shipments in 2018. 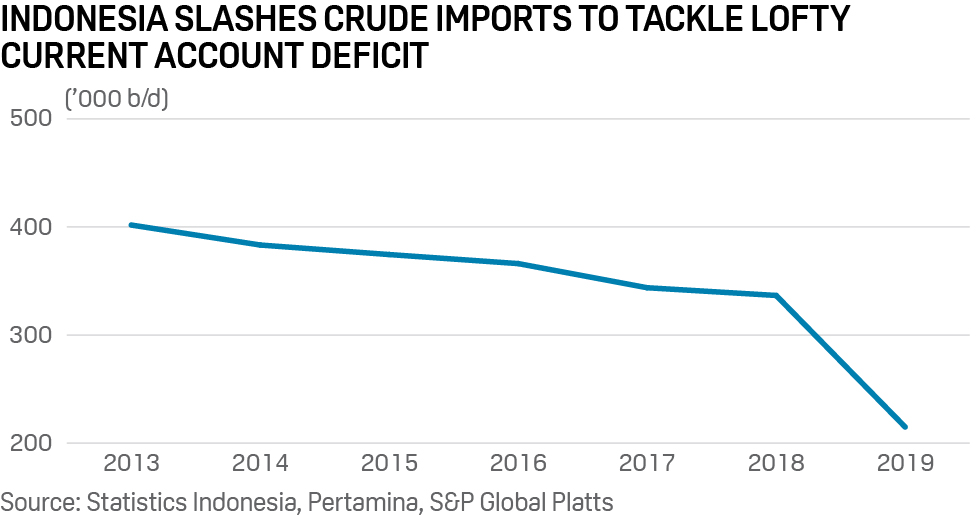 Pertamina has also been directed to boost its crude purchases from oil companies operating domestically as a means of reducing Indonesia’s dependence on oil imports.

“Pertamina would have to negotiate and try to buy [crude oil] produced [from domestic operations] that has not been purchased yet,” Siswanto said.

The government sees potential domestic crude production of around 80,000 b/d that has not been absorbed by Pertamina, according to Siswanto.

Indonesia saw its current account deficit spike and Pertamina’s purchasing power for oil severely circumscribed by a depreciating local currency during late 2018 and first half 2019.

The government has since stepped up efforts to stabilize the trade balance sheet and the exchange rate by lowering its petroleum import bill and making the most of domestic petroleum production. Former Energy and Mines Minister Ignasius Jonan issued a regulation on domestic crude sales and exports in late 2018 that required Pertamina and other companies with crude processing licenses to prioritize the use of domestic crude oil.

In 2019, Pertamina bought around 147 million barrels of crude from 43 companies operating locally, a significant increase from the realized purchase volume of 10.1 million barrels in 2018, according to Usman.

The economy registered a current account deficit of $31.06 billion in 2018, according to Bank Indonesia data. The deficit is estimated to have narrowed slightly to around $30 billion in 2019, but remain significantly wider than the $16.2 billion deficit recorded in 2017.
Source: Platts