Yes, my friends, I believe that water will one day be employed as fuel, that hydrogen and oxygen, which constitute it, used singly or together, will furnish an inexhaustible source of heat and light of an intensity of which coal is not capable.

“Now is the time to scale up technologies and bring down costs to allow hydrogen to become widely used.”International Energy Association, June 2019
Introduction

There has been a lot of hype in recent years about hydrogen and the deployment of hydrogen fuel cells. Interest is only increasing as countries around the globe look to cut their carbon emissions, to re-use existing infrastructure where possible, and to move away from internal combustion engine vehicles. The International Energy Association produced a report in June 2019 which found that “clean hydrogen is currently enjoying unprecedented political and business momentum, with the number of policies and projects around the world expanding rapidly”. It is a call to arms, concluding that “now is the time to scale up technologies and bring down costs to allow hydrogen to become widely used”.

However, hydrogen is not a new technology. It has been around for a long time: it helped power the first internal combustion engines 200 years ago and since then has become a key component of the modern refining industry. Current primary uses for hydrogen are as a feedstock for industrial and chemical processes, for example, refining petroleum products, methanol or ammonia.

As set out by the International Renewable Energy Agency (IRENA) in a September 2019 report, these current uses will change, there are transferable skills gained in these industries:

“While today’s hydrogen use has limited direct relevance for the energy transition, it has resulted in ample experience with hydrogen handling. Hydrogen pipeline systems spanning hundreds of kilometres are in place in various countries and regions and have operated without incident for decades. Similarly, there is a long track record of transporting hydrogen in dedicated trucks.”

Hydrogen Basics, a guide produced by Hydrogen Europe, is an ideal introductory resource for those new to the landscape and terminology of hydrogen. It cites steam reforming from natural gas as the “most commonly used method for hydrogen production” at 70%. This is followed by oil, coal and electricity (as a secondary energy resource). While the contribution of renewable energy as a production source has been small to date, this is set to increase.

Not all hydrogen is created equal – there is an entire rainbow of hydrogen, not all of it “clean”. While the focus of our series is green hydrogen, it’s helpful to be familiar with other ways that hydrogen can be made. 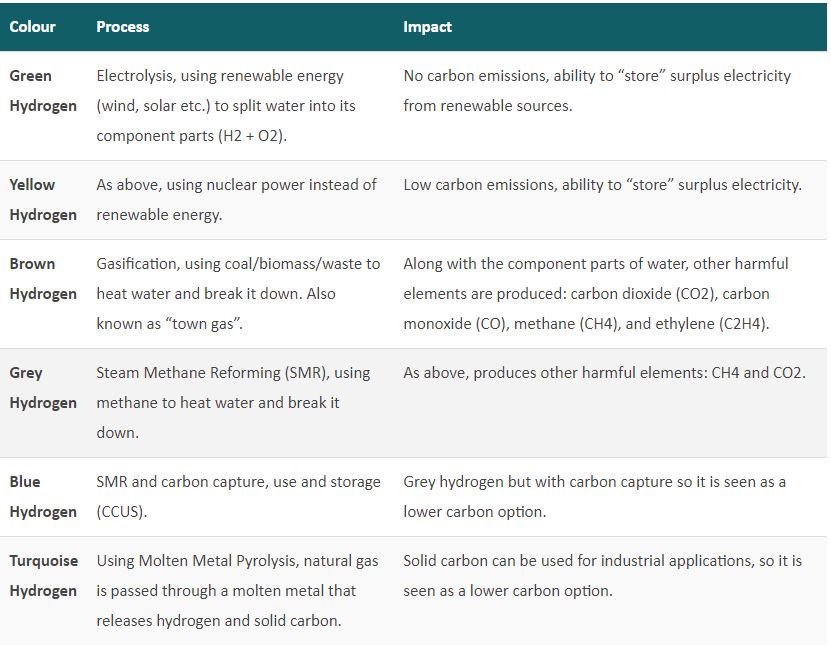 Electrolysis of water is the process of using electricity to split water into hydrogen and oxygen. This reaction takes place in electrolysers, devices which can range in size up to large-scale production facilities that can be linked to wind and solar farms.

As pure water is not a particularly good conductor, electrolysers use substances that are able to conduct electricity when dissolved in water which are known as electrolytes. There are different types of electrolysers depending on the (i) electrolyte materials they use and (ii) temperature at which they are operated.

Low-temperature electrolysis technologies are the most developed. High-temperature electrolysis is also possible but is still in development stage and not yet commercially available. The hope is that, in due course, it will increase conversion efficiency (efficiency being measured as the amount of electricity required to produce a certain amount of hydrogen) and produce synthetic gas for use in synthetic liquid fuels. 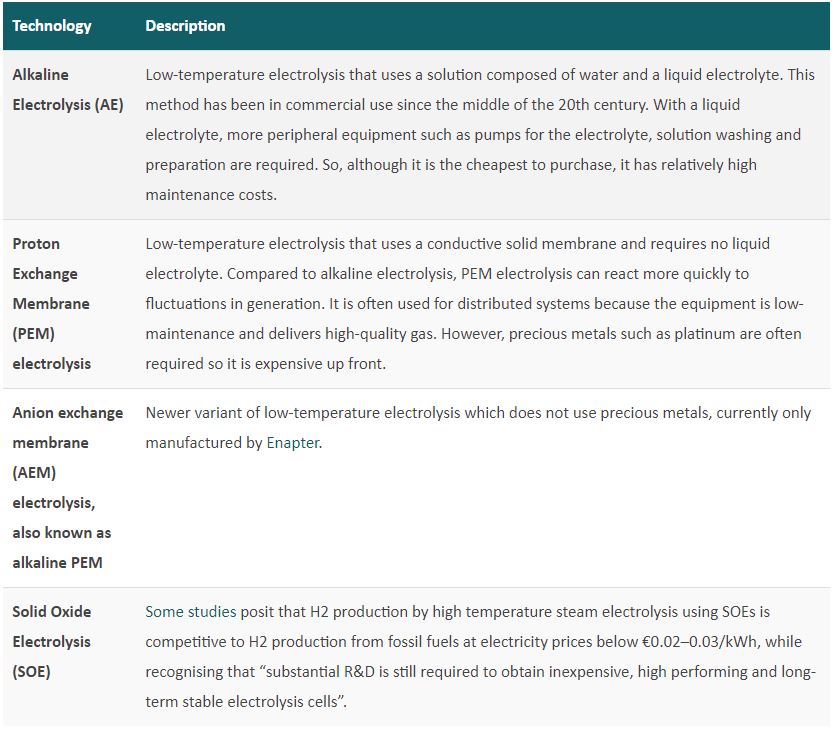 This list is by no means exhaustive, but we hope it will serve as a helpful introduction to the language of hydrogen technology. It is also worth noting that many of the electrolysis processes above do not need to operate solely in large industrial installations. Electrolysers can be large scale, or they can use the modular approach favoured by Enapter.

Finally, a word about fuel cells. A fuel cell generates electricity from an electrochemical reaction just like a battery but the ‘fuel’ often being referred to is hydrogen, e.g. the hydrogen produced from electrolysis. The fuel cell converts the chemical energy of hydrogen into electricity by reacting hydrogen with oxygen to form water and as by-product, releasing electrons through an external circuit as an electric current. Fuel cells can produce electricity indefinitely as long as the hydrogen and oxygen are supplied. For our more technically minded readers, further information about how fuel cells operate can be found here.

“As part of their commitment to reaching net zero emissions, many governments around the world are looking to ban vehicles with internal combustion engines in the run up to 2050.”
Drivers of growth

There are many factors that are driving interest in and growth of green hydrogen. Many countries have signed up to the Paris Agreement and are therefore seeking to reduce carbon emissions. Their goal is to limit the impact of climate change and, more specifically, limit global temperature increase to 1.5 degrees Celsius. Some countries have gone even further, with the United Kingdom being the first major economy to enshrine a net zero emissions target into law in June 2019. As the United Nations reported in September 2020, the “number of commitments to reach net zero emissions from local governments and businesses has roughly doubled in less than a year”.

As part of this commitment, many governments around the world are looking to ban vehicles with internal combustion engines in the run up to 2050. In its Global EV Outlook 2020, published in June 2020, the IEA noted that “17 countries have announced 100% zero-emission vehicle targets or the phase-out of internal combustion engine vehicles through 2050.” The report cited France as the first country to put this into law in December 2019, with a target date of 2040. The UK recently (November 2020) increased its ambition, bringing forward the target date to 2030. As set out by the BBC, “the UK is now in second place after Norway, which has a fossil fuel vehicle abolition date of 2025”.

Reducing carbon emissions in electricity production is, in some ways, the easiest part of the puzzle. Work has clearly started toward reducing emissions in road transportation, as set out above. However, reductions are also needed in long haul transportation, heating and industry. Hydrogen can play a large role here – see below for possible applications.
Applications

Current and potential applications for hydrogen include:

The opportunities in these industries are exciting, and we look forward to exploring them with you in future articles in this series.
Source: Watson Farley & Williams LLP