AMI Marine Ltd is manufacturer of the trusted SMIDS (Speed Movement Information Display System), installing their first ever system onto Vessel MT AURIGA of Vela Shipping (owned by Saudi Aramco) back in 1997 and then supplying these systems to organisations such as STASCO (Shell), EXXON, BOSKALIS, HAM Dredgers and U.S. Navy Heavy Lift Tankers. The list goes on extensively with over 200 large and Super Structure Cargo Carriers including VLCC’s, LNG’s and Semi-Submersible Carriers.

The SMIDS SDME system became a reliable and trusted solution as a cost-effective alternative to the Traditional Doppler Docking Systems, where with retrofits utilising existing cabling to convert to above water GPS and GLONASS sensors. SMIDS has always been a trusted Visual Display to Safe Docking and manoeuvring in Ports.

SMIDS is especially useful for offshore discharging of cargo, vessel lightering and Ship to ship transfer, providing unprecedented accuracy of 0.01 of a knot speed indication, becoming most popular with Ships Masters and Tug Operators. No matter the river or sea conditions encountered, SMIDS was, and still is the most dependable aid to the safe docking of large commercial vessels – 50,000 GRT and above. The Dredging industry have also used SMIDS extensively due to the requirement for accurate movement indication.

Due to the refinement of ship design processes and glass bridges becoming the norm, the AMI Marine team decided to invest in developing an all-new software based SMIDS Pro system, moving away from the EPROM technology of past ERA’s. The SMIDS Pro, which is to be launched in February 2023, calculates, and displays vessel movement information, reporting the ground speed of the vessel’s heading, and sideways movement at the bow and stern, with the notable accuracy of 0.01 knots, assisting the navigating crew to make informed decisions when in the process of docking, no matter what sea state or weather conditions are being encountered. 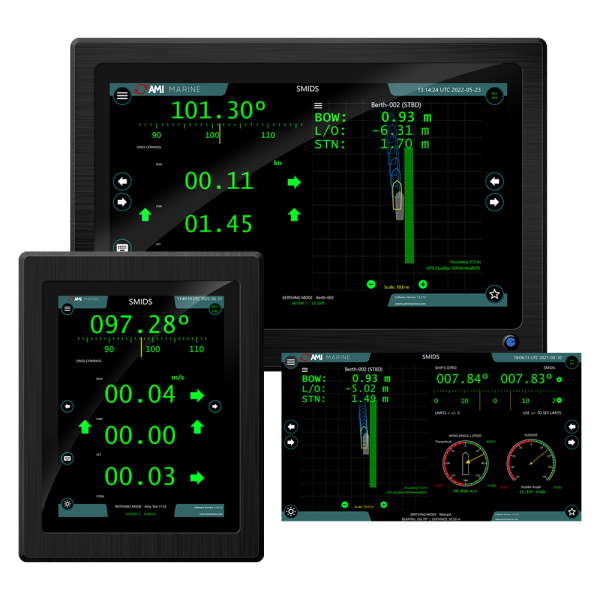 SMIDS Pro safely records all ship’s movement data and offers easy to use playback software for future performance evaluations, crew training, and when necessary, incident investigation. Along with SDME, SMIDS Pro offers an optional THD (Transmitting Heading Device) function which is a vital standalone back up to safe navigation, especially when there are critical failures of Navigation systems encountered, which are not as uncommon as you may think.

SMIDS Pro has full data recording capabilities, with the internal storage retaining over 50 days of accurate ships movement information and all data can be reviewed using the embedded AMI Data Replay Software, with free lifetime updates on each system installed.

2022 is now behind us and as we near the official launch of SMIDS Pro in early February 2023, AMI Marine is now extending a limited one time offer to our customers to access the SMIDS Pro SDME system. Our first 20 customers will have the opportunity to acquire this new release system which will be supplied at a subsidised 40% discount! (Excludes Installation costs)
Source: AMI Marine