US President Joe Biden’s next big legislative push is an infrastructure bill that will top US$2 trillion. The President has broadly defined ‘infrastructure’ to include schools, housing for the elderly and much else besides the classic ingredients of roads, bridges and ports. While the total price tag is huge, constituencies in both the Democratic and Republican parties will jockey for their favourite projects, so some needs will be short-changed.

Even with a price tag in the tens of billions, enlarging ports on the US West Coast should be a priority for Biden. Dozens of container ships are currently idled awaiting berths off Long Beach and Los Angeles, the two busiest and biggest West Coast ports, and many are instead routed north to Oakland and Seattle.

Sceptics may question whether such spending is justified, pointing to former president Donald Trump’s trade war with China (now embraced by Biden) and the ‘Buy American’ trend. Perhaps rhetorically, the age of globalisation has passed and with it the need for ever more shipping berths and connecting roads and rails. But the powerful economic drivers of globalisation, though tempered by nationalism and the COVID-19 pandemic, will continue to enlarge shipping volumes for at least the next decade. This includes eye-catching cost differences between the United States, Asia and Latin America, which are reinforced by factors such as technological differentials, product varieties, quality distinctions and production schedules. 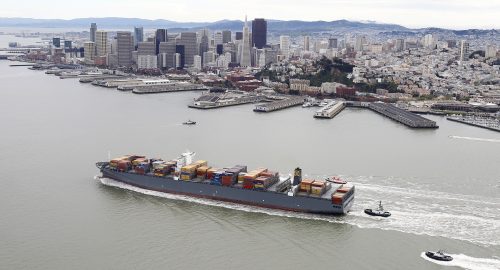 The US–China trade war will alter sources of supply and ‘Buy American’ will shorten supply chains and raise prices. Yet while political obstacles can dampen trade, they cannot decouple the United States from the world economy.

Before the trade war kicked off in 2018, US imports of goods from Asia through the Long Beach and Los Angeles ports had increased steadily since 2010. On average, the volume of US purchases of Chinese goods grew by 3.6 per cent every year between 2010 and 2017. Goods supplied by Asia excluding China grew at an even faster pace, with an average growth rate of 4.8 per cent every year.

The trade war initially increased US demand for Chinese goods as companies front-loaded to avoid paying higher tariffs. But as these tariffs took effect, Chinese products began to lose their competitive advantage in the US market. The volume of US imports from China through the Long Beach and Los Angeles ports went up 6.2 per cent in 2018 before dropping 17.7 per cent in 2019. The trade war had little effect on US imports from other Asian countries, which grew 4.7 per cent in 2019 after experiencing a mild decline in 2018.

Even if Biden were to ramp up the trade war with China — for now an unlikely prospect — it would not necessarily depress shipping volumes from Asia to the West Coast ports. The AmCham China survey indicates that most businesses departing China will look to go elsewhere in Asia, not return production to North America.

COVID-19 shocked the global economy in 2020. Surprisingly, as China was the first to bring the virus under control and resume economic activity, US imports from China through Long Beach and Los Angeles grew in 2020, partially owing to the surge in demand for personal protective equipment.

As vaccines roll out in the United States and around the globe, the US economy will further recover and production capacity will rebound in other Asian countries excluding China. US imports from these countries may well return to the pre-COVID-19 level later this year and continue growing at their pre-COVID-19 pace for the rest of the decade.

Supply chain disruptions on road and rail links from West Coast ports may be partly responsible for the spectacle of container ships idled off Long Beach and Los Angeles and in San Francisco Bay. But such disruptions are likely to be resolved as truck drivers and rail crews return to work, but the more serious problem of inadequate port capacity will take longer to address.

This makes the case for massive infrastructure enlargement in Long Beach, Los Angeles and other West Coast ports. Port projects generally take longer than initial forecasts, so a legislative green light in 2021 will not translate to significant new capacity for at least three or four years. Shipping backlogs seen in news media photos today will likely persist for months, if not years. US port enlargement needs to move ahead now at full speed.
Source: East Asia Forum