Iron ore bulls have been on the receiving end of a thumping this week as the commodity’s wild ride goes on. Prices have lost more than 6% as investors weigh demand ahead of a week-long holiday in China, the intensity of looming winter restrictions on mills, and recovering mine supplies.

Futures in Singapore have declined four of five days this week and have dropped back into the $80s a ton, although gains on Friday pared some losses. In China, the most-active contract is also headed for a weekly loss. Mainland steel futures have backtracked since Monday, too. 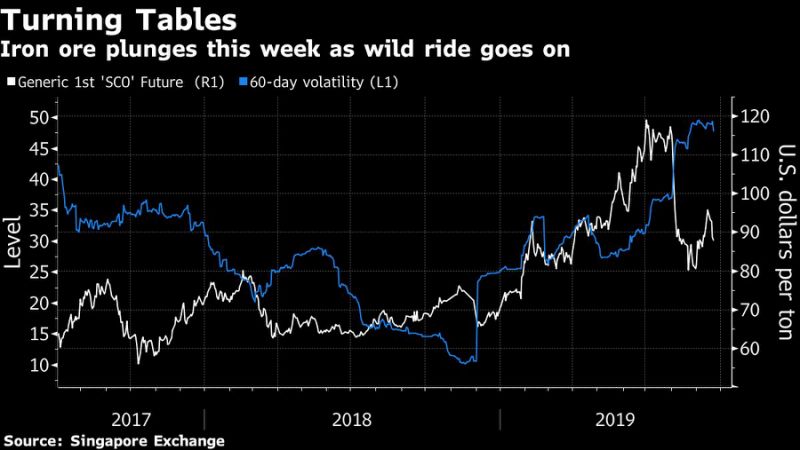 Iron ore’s steep drop is the latest gyration in prices: they were roiled by a dam disaster at Brazil’s Vale SA that spurred a first-half rally, suffered a steep leg down as output recovered, then saw renewed gains, which are proving fragile. The backdrop to this week’s retreat has been mounting signals global growth is slowing, including somber outlooks from the World Bank and OECD.

As winter approaches, traders are also assessing the potential impact of seasonal curbs on steel supply in China, which are intended to roll back air pollution in the world’s largest producer. Authorities have released a draft plan for this year, according to Citigroup Inc., citing a local report. “The overall impact could be similar to that of last winter,” Citi said in a note.

Iron ore for October swung between a 1% loss and a 1.7% gain on Friday, and traded at $89.72 a ton at 1:56 p.m. Spot ore dropped to $91.75 a ton on Thursday, according to Mysteel Global. Spot prices remain more than 25% higher this year, well above production costs of miners including BHP Group and Rio Tinto Group.
Source: Bloomberg