Iron ore has yet to find a bottom, extending a brutal sell-off on rising concern Chinese demand will weaken this half as supplies rebound. That blow adds to trade-war headwinds as investors shun risk assets.

Futures in Singapore sank into the $80s a ton, while the contract in Dalian hit the lowest since May. On Tuesday, Fortescue Metals Group Ltd. warned there’s potential for mainland demand to soften this half compared with the first six months. That’s just the latest red flag after a run of indicators from rising port holdings to sinking mills’ profitability that foreshadowed the market’s swoon.

“Supply-and-demand drivers have been tilting to a bearish stance for weeks now — the fall was in the making and we only needed a trigger,” Marex Spectron Group analyst Hui Heng Tan said, referring to the U.S-China trade conflict. The recent weakening of the yuan, which hurts the purchasing power of mills already facing weak margins, has sparked the decline, he said. 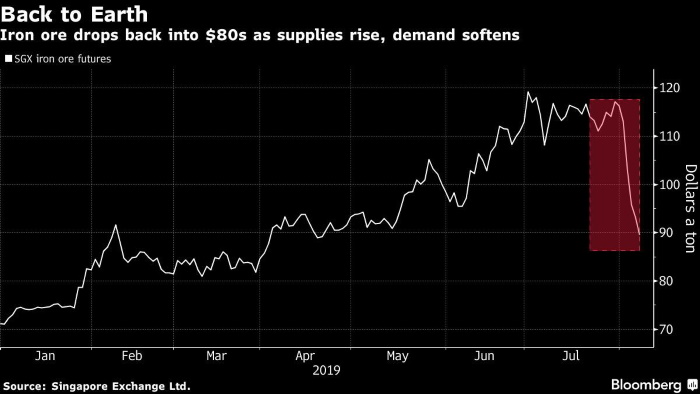 The steel-making commodity has gone into freefall as the U.S.-China trade war hurts investors’ appetite for raw materials, at the same time that iron ore’s fundamental drivers weaken. This week, the China Iron & Steel Association said it expected price declines to continue as mainland consumption falters. The sudden retreat has driven futures and spot prices into bear-market territory.

“Mills in China are reportedly reluctant to increase iron ore stockpiles given the weak demand backdrop,” Commonwealth Bank of Australia said. “Demand concerns reflect the U.S.-China trade tensions,” including Washington’s recent designation of Beijing as a currency manipulator, the bank said in a note.

Mining stocks remained under pressure, with Fortescue falling 3.3% in Sydney. In London trading, Rio Tinto Group dropped as much as 2.1% to the lowest since March and BHP Group declined 1.1%.

Fortescue flagged weaker second-half demand, although Gaines cautioned that “it will certainly still be up year-on-year.”Roy Hill Holdings Pty is aiming to lift shipments to a run rate of 60 million tons a year, Chief Executive Officer Barry Fitzgerald said.Iron ore prices are expected to drop in a volatile fashion as mainland steel production is seen falling, the China Iron & Steel Association said in a monthly analysis.
Source: Bloomberg