Is a Dry Bulk Market Rebound Around the Corner?

With the Chinese New Year holidays in full swing, dry bulk market analysts are wondering whether the freight market will manage to regain its upwards momentum, once the Chinese economy gets back to work. In its latest weekly report, shipbroker Allied Shipbroking said that “throughout the pandemic, uncertainty has been found in abundance across all global markets including that of shipping. Given this, most have just focused on hoping for a market with less noise and volatility for 2021. In the dry bulk sector, it seems that a slightly more stable scene has started to emerge. Beginning with the freight market, monthly average returns in all dry size segments have experienced a rather “atypical” bullish January”.

According to Mr. Thomas Chasapis, Research Analyst with Allied, “for the Capesize and Supramax, we must look back to the distant 2014 to notice such relatively “firm” numbers, while in the Panamax and Handysize the search takes us even further back. However, in a tail-risk regime, even positive trends are questionable, especially in respect to the durational risks involved. 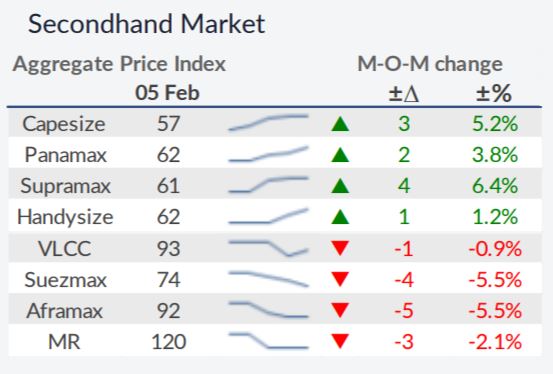 Given the current time period we are facing, a logical attitude, given that we are entering the peak of Chinese Lunar New Year Festivities, the downward pressure will probably intensify. We should be though more interested as to whether the current fundamentals can support a relatively quick recovery after China returns to “business as usual” or if these “good” returns will undergo some sort of flattening, with the positive noted over the past couple of weeks fading away rather quickly?” 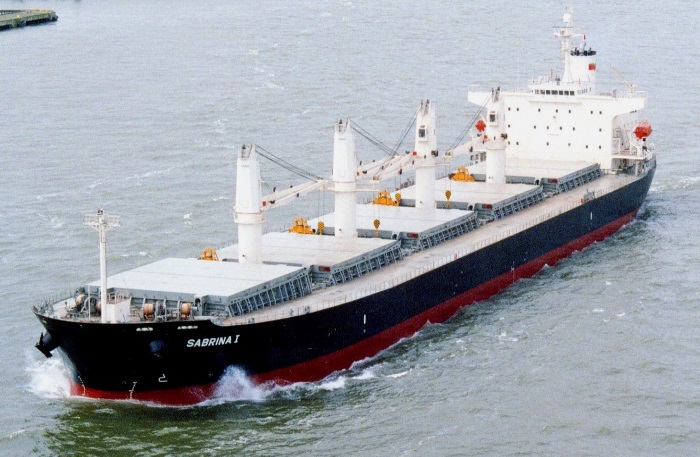 Chasapis added that “in comparison with 2014, the freight market at that time experienced a rather sharp correction during February and, to some degree at least, it continued throughout March. Is this the case for 2021? A rather tricky question to answer, given the current circumstances and with many participants in the midst of testing out “fresh” investment strategies. Commodity trends are essential for any given analysis in in dry bulk shipping and more so for “heavy weight” market barometers such as iron ore, which need to be kept under even closer observation. It is true, that the slight downward correction noted in iron ore prices during the end of January helped push to some degree appetite from traders, especially, when thinking about the relatively “weaker” Q4 output from Vale, as well as the slight correction in current forecasts for iron supplies from major producers such as Rio Tinto and Vale (a situation that can support further iron ore price levels). Whether this asymmetrical appetite will affect freight rates further in the near-term future, it is yet to be seen. A lot will depend on how market participants respond to any potential restocking procedure (from side of end-users), as well as any “characteristic” gear up in steel production during the spring period”, he noted. 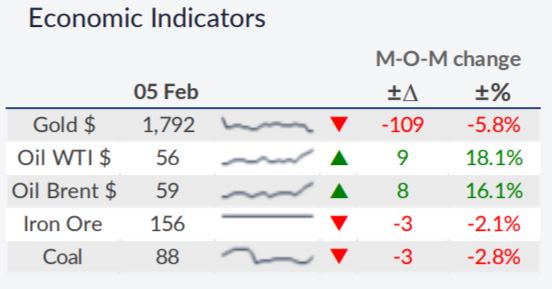 “Hopefully, Chinese steel demand will prove to be bullish for the year, further helping to cover the gap left behind by all others in global trade. As for coal, its macroeconomic prospects have been bearish well before the Covid-19 pandemic. The compounding pressure from the extended lockdowns has driven for a further correction seen in coal demand (and consumption) last year. Notwithstanding this, there is ample optimism for a considerable boost to be noted in demand during the current year, nourished (to a great degree) by a higher number of coal-fired power plants coming online. All-in-all, 2021 may well have its own challenges, but many indicators (direct or indirect), all suggest some sort of partial rebalancing to take place. If we are not to see any excessive negative dive in realized earnings any time soon, we can potential witness a further positive boost seen in forward sentiment indicators such as asset price levels and FFA contracts. This general upward drive can prove to be a mechanism of general stability, amidst periodical asymmetries in market dynamics”, Allied’s analyst said.
Nikos Roussanoglou, Hellenic Shipping News Worldwide