Is There Really a Global Shortage of Crude Oil?

From Russia to Saudi Arabia, Iran to Venezuela, the list of crude oil supplies being curtailed or disrupted around the world is growing longer by the month.

This story examines whether the market’s biggest supply shifts are actually netting out into a global shortage of oil or not. The answer is a complex one, hinging on the type of crude in question and the time-frames selected.

The simplest supply measure is all the oil pulled out of the ground globally. On this view it does indeed look like global production has fallen sharply over the past six months, as the OPEC+ group of countries slashed supply, while the U.S. has toughened sanctions on the oil industries of Iran and Venezuela. 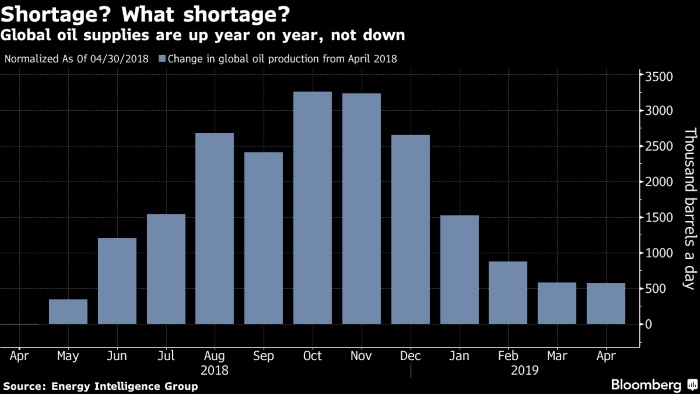 Figures published by the Energy Intelligence Group show that global oil production was 96.79 million barrels a day in April. That is a drop of more than 2 million barrels a day since the end of last year. But just a slightly a longer time-frame gives a different picture. If you compare April with a year earlier, production is actually up, by 570,000 barrels a day — pretty much in line with oil demand growth.

While such a broad look at global oil production data offers some insight, it misses a lot of important detail.

Most of the new refineries built in Asia and the Middle East in recent years were designed to run on a diet of heavy, sour crudes. These barrels feature a high proportion of large hydrocarbon molecules that need to be broken down into smaller ones to make high-value transport fuels. They also tend to contain relatively high concentrations of sulfur that have to be removed to meet anti-pollution regulations. 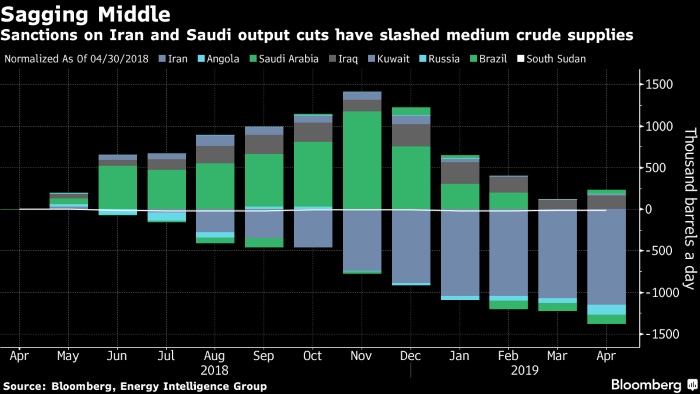 But that’s not where the growth in oil supply has been.

Booming production from the U.S. Permian Basin has driven a surge in the supply of light crude, which was up year-on-year by more than 1.8 million barrels a day in April. By contrast, the increase since the end of 2018 has been much smaller, at 160,000 barrels a day.

The picture for heavy crude is completely different.

Slumping output from Venezuela, where years of mismanagement and under-investment have been compounded by the impact of U.S. sanctions on the state oil company, has driven a sharp drop in global supply, both year-on-year and year-to-date. The impact of Venezuela’s difficulties has been exacerbated by continuing declines in Mexico’s oil production, which was previously expected to be reversed this year. 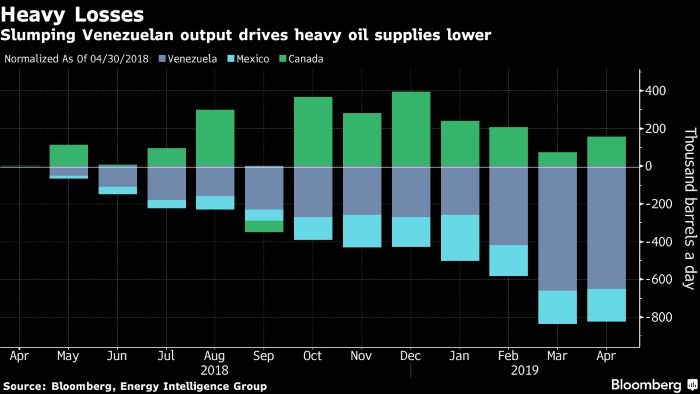 An uptick in Canadian output, which had been curtailed by government-imposed restrictions in the first months of this year, has done little to offset the recent declines in heavy oil production elsewhere.

And then there’s that big bit in the middle of the range — medium crude — that’s dominated by Russia and Saudi Arabia and includes most of the other Persian Gulf producers.

Saudi oil production, which surged in the second half of 2018, is now back where it was a year ago. Initially, it more than offset the decline in Iranian supply that resulted from the snap-back of U.S. oil sanctions. But since January, a drop in Iran’s output hasn’t been covered by increases in medium crude production elsewhere.

Sanctions waivers, issued to eight buyers of Iranian crude, were not renewed by the U.S. when they expired in early May and that will keep Iran’s output under further pressure in the coming months. For now, Saudi Arabia appears unwilling to boost its own supply, preferring instead to push for an extension of the OPEC+ output restraint. 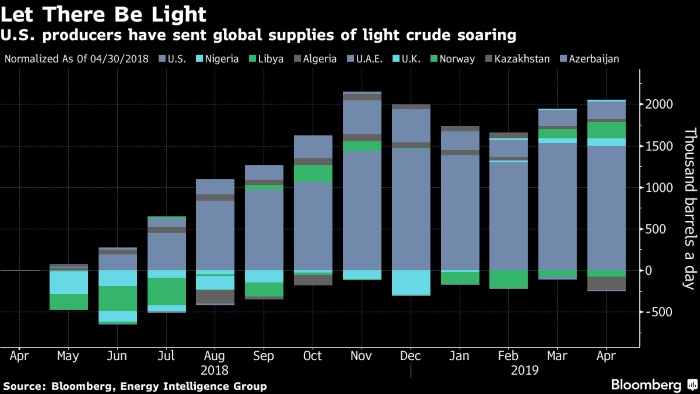 So is there an oil shortage? There’s certainly no shortage of light crude, but the picture is very different for the medium and heavies. The 2 million barrel a day drop in total production since the end of 2018 has all been medium and heavy, with little additional light oil to offset the decline in that period. But over the longer time-frame, rising light crude output has more than offset the declines elsewhere, giving a small net increase.

*NOTE: Heavy crude is usually defined as having an API gravity below 26, while light crude has a gravity above 35. Grades between those two limits are classed as medium.
*NOTE: Julian Lee is an oil strategist who writes for Bloomberg. The observations he makes are his own and are not intended as investment advice
Source: Bloomberg

Drewry: World Container Index Down by 2.3%