The Isle of Man Ship Registry is hailing the continuation of a successful 15-year partnership with Subsea 7 following registration of the offshore energy services firm’s newest vessel, Seven Vega.

It is the eleventh Offshore Support Vessel built for Subsea 7 to be flagged with the Registry. Seven Vega has been designed to install economical flowline technologies that address the growing market trend towards longer tie-back developments, and sets a new standard for offshore pipelay.

Chris Martin, a Senior Surveyor at the Isle of Man Ship Registry, has been involved in nine Subsea 7 projects, starting with the pipelay vessel Seven Oceans in 2006.

He said: “Our partnership with Subsea 7 has been in place for almost 15 years and the Registry is proud to have been part of yet another successful project. The majority are fully certified as Special Purpose Ships, predominantly designed for cable and pipe laying. They are fantastic vessels equipped with amazing technology and I feel fortunate to have played a role in so many of the builds.”

The design of Seven Vega is particularly innovative. While most Subsea 7 vessels store piping and cabling in large carousel holds under deck, Seven Vega stows the product on external vertically mounted reels recessed into the deck with an open-top configuration. The design of the reel-lay system was focused on crew safety, total product capacity, operational efficiency and flexibility. The twin tensioner pipelay tower tilts to allow pipeline installation from shallow waters to depths of up to 3,000m. The large multi-level workstation optimises the efficiency of operations in and around the firing line, while the creative positioning of the main and auxiliary reels – recessed into the main deck – offers payload flexibility. 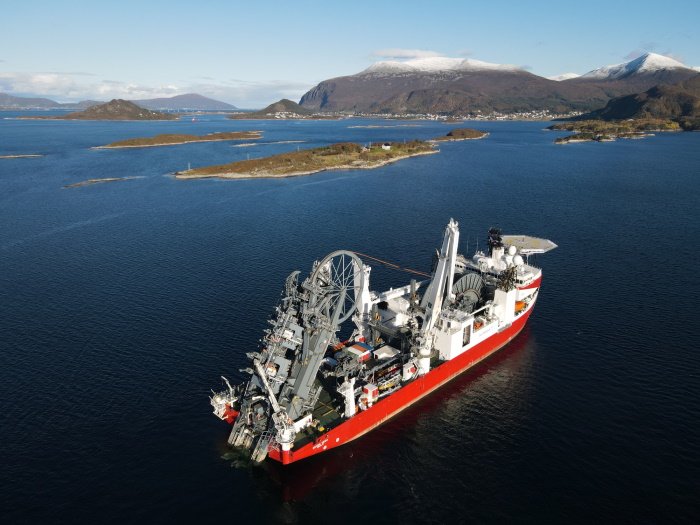 Once drawings were in place, Mr Martin and fellow Senior Surveyor Carlo Vinelli analysed the proposal against statutory regulations to ensure the design of Seven Vega was safe and met relevant regulatory requirements. The ship’s unconventional design also required a close cooperation between Class and Flag to identify and achieve an equivalent standard of quality and safety compared to a traditional vessel.

Mr Martin said: “It was quite a challenging design and naval architects undertook a lot of work well before the keel was laid to help get the novel design through the various regulations. Proving the design of the main reel holder was a particular challenge, requiring a number of tank modelling tests to ensure compliance. Model seakeeping trials were carried out at MARIN’s facilities in The Netherlands to understand exactly how the vessel would perform in extreme operational sea conditions.

“It was an exciting project to be part of – completely different, for example, to the construction of a standard bulk carrier that in some cases might be turned around in just three months. It took three years to get from kick-off to registration, which underlines just how specialist Seven Vega is and the level of technology incorporated into the build.”

The Isle of Man Ship Registry is a Category One member of Red Ensign Group with a network of surveyors in key locations around the world. Its team will now carry out a post-registration inspection of Seven Vega, followed by general inspections approximately every two-and-a-half years.

The Registry recently began offering remote general inspections to its clients where appropriate, a service that has proved popular with shipowners forced to contend with travel restrictions imposed due to the Covid-19 pandemic.
Source: Isle Of Man Ship Registry

Safe Bulkers, Inc. Entered into a Bareboat Charter Agreement with a Purchase Option for a Capesize Class Dry-bulk Vessel

Fuel Consumption: IMCA And Its Members To Play Key Role