Japan imported more than 210 million short tons (MMst) of coal in 2018, making it the world’s third-largest coal-importing country after only India and China. Japan continues to use steam coal to fuel one-third of its electricity generation and metallurgical coal for raw steel production.

Before 2011, Japan’s Ministry of Economy, Trade and Industry (METI) had planned to reduce coal’s generation share by more than half by 2030, intending for nuclear power to offset coal plant retirements. The plan included increasing the nuclear generation share in Japan’s electricity mix to 50% by 2030. However, as a result of the Fukushima accident and subsequent suspension of Japan’s nuclear fleet, METI now projects a future energy mix of 20% to 22% nuclear, 22% to 24% renewables, 26% coal, and 27% natural gas through 2030. 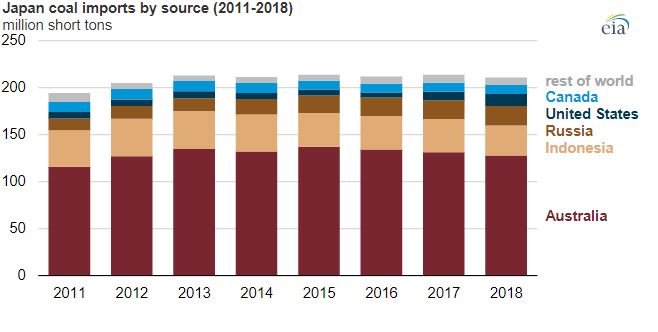 Japan’s utilities plan to construct 20 gigawatts (GW) of coal-fired electric power generation capacity in the next decade. The scope of development will depend on how many suspended nuclear reactors resume operation. Increased competition in Japan’s electricity market may also have an effect as new non-coal entrants compete for market share.

New coal plant development also depends on whether the Japanese government will grant environmental approvals to planned coal-fired power projects, given the country’s intention to reduce carbon dioxide (CO2) emissions levels by 26% by 2030. The environmental approvals will depend on several factors, including the plant’s proximity to population centers and the pace of Japan’s CO2 emissions reduction efforts. 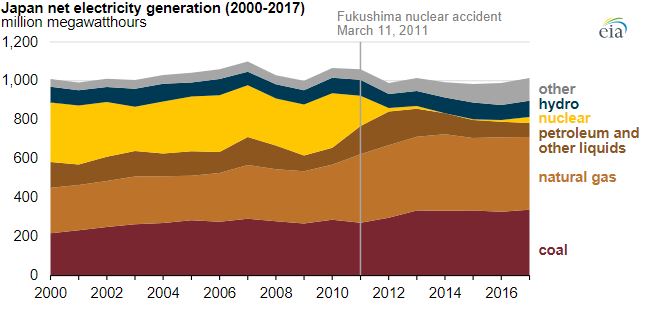 The Japanese government has promoted the development of more efficient coal-burning technologies, such as ultra-supercritical coal-fired power (USC) plants, in an effort to meet environmental goals. USC plants emit less carbon dioxide per unit of electricity generation than traditional coal-fired plants, although their emissions are still nearly double that of natural gas plants.

METI is currently recommending that 50% of all coal-fired electricity generation come from USC plants by 2030, and investors in Japan have begun to limit coal financing to high-efficiency coal projects instead of traditional designs.
Source: EIA

2019-06-17
hellenicshippingnews..
Previous: Having a gas: Australia dominates China’s LNG supply
Next: Hudson Shipping Lines Pledges Not to Use Vessels with Scrubbers Installed