Japan doubled Murban crude oil imports from the UAE in October year on year, boosting total imports from the emirates to 1.04 million b/d, up 37% on the year, as local refiners favor the grade for producing marine fuels complying with the International Maritime Organization’s incoming global low sulfur mandate.

Murban was the single-largest imported grade with an average of 445,032 b/d for October, when the UAE was the top crude supplier for the month, overtaking Saudi Arabia, as Japan also boosted imports of Das crude by 30% year on year to 396,528 b/d, preliminary data released Friday by the Ministry of Economy, Trade and Industry showed. 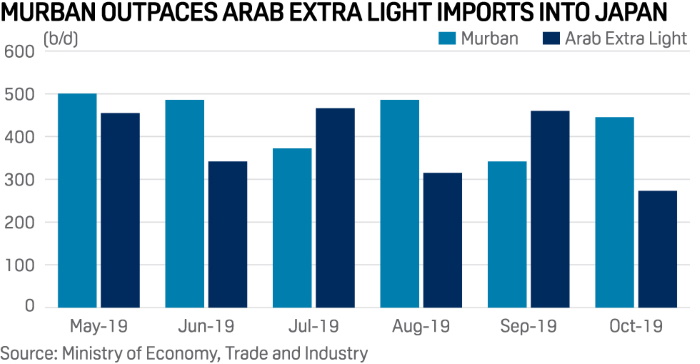 Crude imports from Saudi Arabia dropped 29% year on year to 891,808 b/d in October due mainly to decreased imports of Arab Extra Light crude, which plunged 58% from a year ago to 272,998 b/d in the month, according to METI data.

But crude traders were doubtful as to whether the jump in Abu Dhabi crude imports was a direct side-effect of the attacks on Saudi oil facilities in September, even thought Saudi light crudes were the most impacted, they told S&P Global Platts on Friday.

“The Saudi event happened in September, and September loading [October arrival] barrels traded in July, so I very much doubt there is a link,” said one seller.

The strong interest in Murban crude was likely linked to a surge in spot buying interest for the grade during July, when September loading cargoes saw a jump in spot activity due to strong middle distillate margins, traders in Asia told Platts.

In the spot market then, September-loading cargoes of the grade rose from a discount of minus 20 cents/b on July 16 to OSP parity the next day, and then crossed the zero threshold into small premiums by July 19, according to Platts records.
IMO 2020 CHANGES

Japan’s imports of Murban crude have been rising on a year-on-year basis in recent months after refiners started to process more light crude grades in order to launch commercial supply in October of 0.5% sulfur bunker fuel oil that complies with the IMO’s global sulfur cap on marine fuels from January 1.

The IMO 2020 rules stipulate that sulfur content in fuels must be cut to 0.5% from the current 3.5% to lower emissions.

Murban crude is among the light crude grades favored by Japanese refinery configurations to produce IMO-compliant bunker fuel oil. Murban is Abu Dhabi’s main onshore crude grade, with an API of 40 and a sulfur content of about 0.7%-0.8%.

Vietnam’s Chim Sao and Australia’s Wandoo crude are among the grades increasingly sought after by end-users as an ideal feedstock to produce IMO-compliant low sulfur marine fuels.

Wandoo crude is suited for direct blending into the low sulfur fuel oil pool due to its very heavy quality. The grade has a gravity of 19.7 API, and sulfur content of 0.14%.

Around one cargo of Wandoo crude typically loads from the terminal off Northwest Australia each month, and has been shipped to the waters off Singapore or to Japan so far in 2019, S&P Global Platts vessel tracking software cFlow showed. 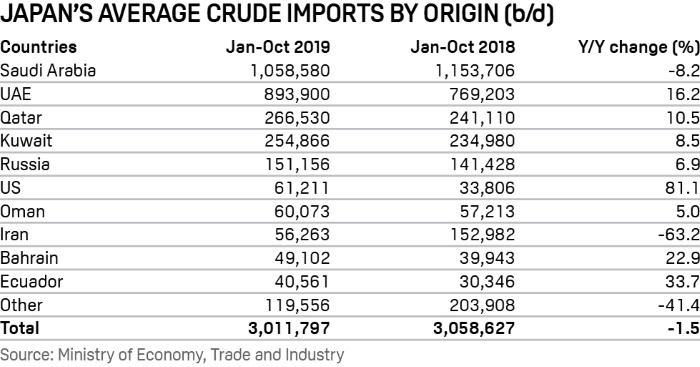