Major Japanese steelmakers need to raise the bar. Their credit quality is threatened by intense competition and increased debt.

Nippon Steel Corp. (BBB/Negative/–) and JFE Holdings Inc. (unrated) will continue struggling to maintain creditworthiness in the next one to two years, in our view. Competition with large East Asian peers that offer low-cost products leads us to believe the two largest Japanese steelmakers will remain behind rivals in terms of EBITDA. Their debt burdens are also likely to remain higher than peers’ because of continued heavy investments for growth.

Things are not all bad, however. We forecast improvements in EBITDA margins at the two steelmakers. This is because domestic steel demand will recover, in our view, and we think recent sizable fixed-cost reductions through drastic facility reorganizations could bear fruit. Also, the companies could delivery more high value-added products to Japanese customers, mainly in the auto sector, in the coming years.

For creditworthiness to improve, we think that the two Japanese steelmakers will need financial savvy over the next one to two years. We forecast debt-to-EBITDA ratios, which are key cash flow metrics for companies, will gradually improve in the next one to two years supported by a recovery in profit. However, debt burdens are likely to remain high because of investments in research and development and overseas growth. To alleviate pressure on their operating performances, we assume the two companies will continue selling assets as a short-term measure to counterbalance investment under their business restructuring plans. Still, maintaining credit quality will be tough if operating cash flow does not improve.

Meanwhile, we expect the two companies to remain relatively insulated from environmental risk in the next two to three years. We think they are ahead of the global steel peers in reducing of carbon emissions. As the Japanese companies work to become carbon neutral, we do not expect to see significant cost increases related to global warming mitigation from current levels until 2030. We believe the initiatives to realize carbon neutrality face technological hurdles that will need to be overcome before companies spend big on carbon neutrality. In response to rising criticism of the steel industry’s high carbon dioxide emissions, both steelmakers have published roadmaps for decarbonization. It is difficult for us to comment on how realistic their plans are at this juncture. That said, we believe they can remain competitive and established in the global market if they can use their technologies to pioneer industry moves on becoming carbon neutral.

Domestic production at Nippon Steel and JFE is likely to benefit from drastic restructuring over the next five years or so. The Japanese steel market will likely stabilize thanks to these measures, which should align production capacity with shrinking domestic demand. Thanks to this, we expect profitability to steadily improve, starting in the next one to two years. We also expect the two companies to steadily reduce fixed costs, as closures of blast furnaces and downstream operations lead to less spending on repairs. We forecast Japan’s crude steel output will remain below the 98 million tons logged in fiscal 2019 (ended March 31, 2020), despite a recent recovery of demand.

Shifting to high value-added products will also help the two major Japanese steelmakers improve profitability, in our view. Such products have higher potential demand and can differentiate the Japanese makers from their overseas peers. We expect such products to allow the two companies to achieve better profitability per unit. In addition, we think they can steadily raise prices of products for automakers and other key customers. Considering recent strong market conditions, we forecast their EBITDA margins will improve to 10% or higher in the next one to two years. Their current margins compare unfavorably with those of peers in East Asia, such as South Korea-based Posco and China Baowu Steel Group Corp. Ltd. We estimate that Nippon Steel’s EBITDA margin in fiscal 2020 was about 8.4%, and JFE’s was about 6.5%. Even after rising to above 10%, their margins will in our view remain weaker than that of Posco, one of the most profitable steelmakers.

We also view favorably the two Japanese companies’ focus on strengthening products with good growth prospects. Both companies, in our view, can stay ahead of peers in the high-grade steel market, using their technological edge to capture demand from autonomous driving companies for products that reduce the weight of vehicles. In addition, affiliates of the two Japanese companies based in India, a key growth market, have been generating stable income. The South Asian country has seen robust steel demand in construction, automotive, and other end markets. This has helped stabilize overall profit at the companies.

For Nippon Steel, we believe collaborating with business partners that have a record of operating joint ventures, such as ArcelorMittal, can help it strengthen its competitive position overseas. Such collaborations would allow Nippon Steel to control its financial burden and other risks of doing overseas business.

Despite these strengths, we expect the two Japanese steel companies to continue to book weaker profitability than their East Asian peers. This is because these peers are becoming more competitive. In terms of scale, we think Japanese steelmakers could fall further behind Chinese rivals, which are building cutting-edge steelworks and making dramatic enhancements to production capacity. Nippon Steel and JFE have been dominant in technological development. Chinese and other peers, meanwhile, will likely improve the competitiveness of their current products and gradually catch up with Japanese companies by investing their ample cash flows into the development of high value-added products.

We believe EBITDA of the two Japanese steel companies bottomed out in fiscal 2020 and we expect it to increase in the next one to two years. However, it will likely remain weaker than that of Posco, a competitor of similar scale based in East Asia. 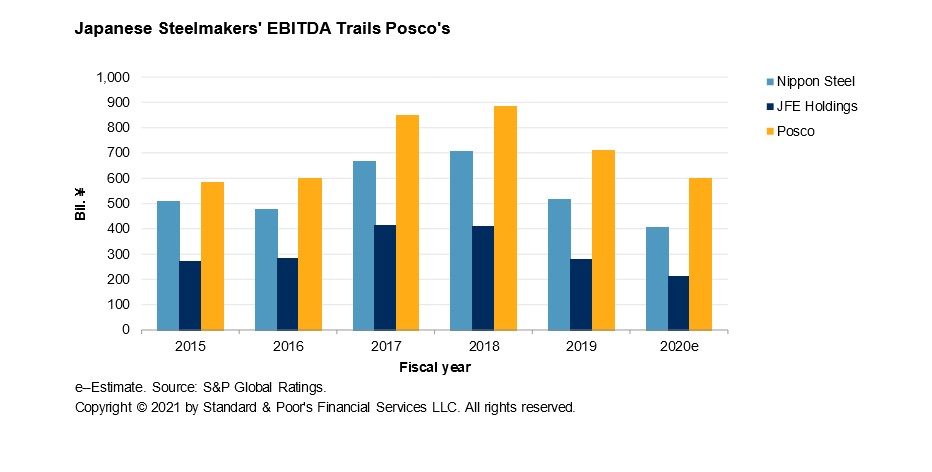 Heavy investments mean the increase in profit alone at Nippon Steel and JFE is not enough to improve creditworthiness. The two companies secured positive free cash flow in fiscal 2020, but their debt remains high relative to cash flow generation. We believe they will likely continue investing as much for growth as they did in the last two to three years. These continued upfront cash outlays will continue to pressure credit quality, in our view.

In a medium-term management plan published in March 2021, Nippon Steel stated that it plans ¥2.4 trillion in capital expenditure and ¥600 billion in business investment in the five years through to fiscal 2025. Under its business investment, the company will finance a blast furnace construction project for India-based Essar Steel India Ltd., which Nippon Steel and ArcelorMittal recently bought in a joint acquisition.

We expect Nippon Steel’s annual operating cash flow to be about ¥520 billion in the next one to two years; it was about ¥400 billion in fiscal 2020. However, we think such factors as lower-than-expected domestic demand and higher raw material or iron ore prices could slow a recovery in operating cash flow. If the company accelerates investments for growth in such circumstances, free cash flow may turn negative. Therefore, we see a chance of Nippon Steel’s debt-to-EBITDA ratio remaining higher than overseas peers’ and weak for our current rating on the company. 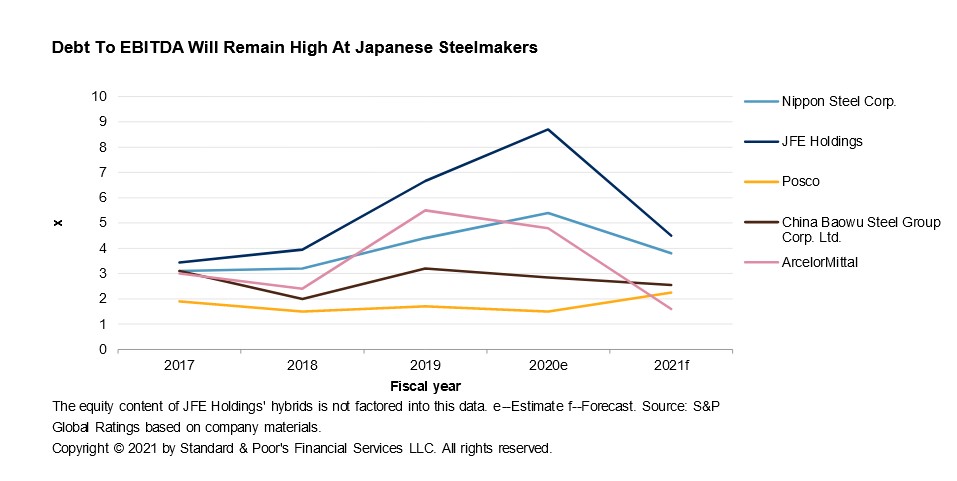 Sound financial discipline at Nippon Steel and JFE can underpin their creditworthiness over the next one to two years, in our view. Better credit quality will depend on the two companies ensuring their core businesses generate sufficient cash flow to cover increasing investments for growth. To alleviate pressure on operating performance, the companies have curbed increases in debt in the last two to three years by selling assets such as cross-held shares and by taking advantage of hybrid capital (through the issuance of subordinated bonds and loans).

We believe the two companies still have some room for asset sales. However, in terms of sustainable financial management, short-term measures will likely mean they struggle to maintain credit quality over a longer timeframe. We consider stable operating cash flow generation to be essential if the companies are to continue making sizable investments for future growth. That said, the steel industry has inherent potential high volatility in operating cash flow. This may constrain the two steelmakers’ efforts to rebuild stable financial bases, in our view.

Leading The Decarbonization Push Is Key

We consider the global metals industry (upstream and downstream, including steel) to remain one of the most exposed to environmental risk. However, we believe the two major Japanese steel companies will remain cushioned from these risks in the next two to three years.

Compared with cutting-edge facilities owned by Chinese steelmakers, the two Japanese companies’ facilities are dated and come with heavy repair cost burdens. Moreover, development of decarbonization technology is not easy. It involves major development costs and capital expenditure. Thus, the two companies’ investment burdens are likely to increase. However, we believe they can absorb these costs, as decarbonization is a long-term process. We have incorporated such costs into our credit assessments.

The two major Japanese steel companies are ahead of global peers in dealing with environmental risk, in our view. As front-runners in the development and production of high-tensile steel, which can reduce the weight of vehicles, we believe the companies will continue contributing to cutting carbon emissions. Also, the two companies are shifting to electric arc furnaces in Japan and elsewhere and are considering the rapid replacement of some blast furnaces. They have also enhanced initiatives for high-grade steel production in recent years. We consider this to be somewhat positive in our analysis, as it eases the companies’ long-term environmental burdens.

We expect increased criticism globally of the steel industry’s high carbon emissions to lead to action. In the coming years, we foresee intensifying competition among global steelmakers on technologies that help tackle global warming. Nippon Steel and JFE recently published their roadmaps for achieving carbon neutrality in 2050. It is difficult to say how realistic their plans at this juncture. That said, technological success realized as the companies work toward carbon neutrality would go a long way to helping the companies remain competitive and established in the global market.