2Q21 GDP is lifted by stronger than expected domestic demand growth and some slight upward revisions to previous data. We now expect GDP in 2021 to reach 2.3%.

Marginal improvement in the headline and underlying components also encouraging
If it were not for the fact that Japan’s confirmed daily Covid-19 case count has now exceeded 20,000, the highest since this pandemic began, we would have found today’s 2Q21 release more uplifting.

Even then, the 0.3%QoQ growth recorded for the second quarter was fairly modest by the standards of some other economies – equivalent to 1.3% at an annualised rate. We have seen far stronger growth elsewhere – the US for example, where growth was recorded at a 6.5% annualised rate in the same quarter.

But there was some more encouragement from the nature of Japan’s latest growth release. As the chart below shows, most of the strength came from domestic demand components, such as private consumer spending, and business investment. We are more encouraged to see this rather than growth in government spending or inventories because it is more likely that these can be repeated in the coming quarters than one-off policy-related boosts.

Likewise, the sizeable drag from net exports in the second quarter owes a lot to the recovery in domestic demand, sucking in imports which are a drag on the GDP figures. Assuming that this is less glaring next quarter, even if domestic demand is a little softer too, we may see this overall drag subside. And inventories, which also dragged a little this quarter, may start to be rebuilt next. 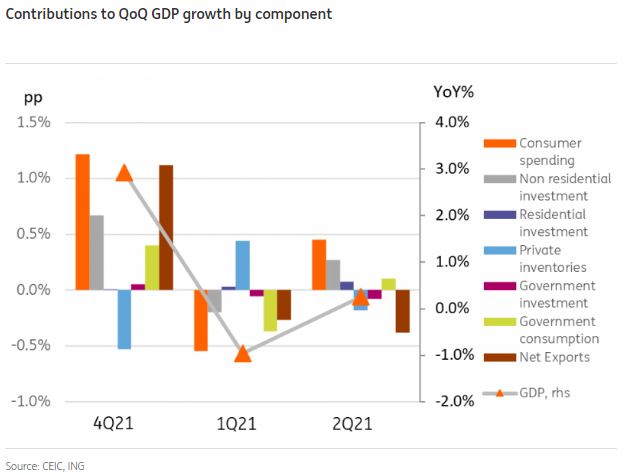 What next?
Normally, we’d put all of this together and forecast a slightly stronger GDP result for the third quarter based on the factors described above. But these are not normal times, and the possibility of further more severe states of emergency to deal with the rising Covid-19 infection rate, alongside Japan’s disappointing vaccination statistics make us wary of doing so. Arithmetically, today’s release makes it look more likely that we will hit 2.3% growth for full-year 2021 (up from 2.1%), but we have been scaling back, not building on our 3Q and 4Q numbers due to the ongoing pandemic.

The JPY has strengthened fractionally on the back of this data, and 10Y Japanese Government bond yields (JGBs) have also nudged slightly higher, but we would not imagine much more than small temporary effects on the back of this data. Neither the Bank of Japan (BoJ) nor Japan’s government has much in the way of remaining firepower to help deliver a stronger outcome than the one we are now forecasting.
Source: ING