While one-off events make it difficult to assess the impact of the U.S.-China trade dispute, Japanese export growth has been slowing this year following double-digit expansion in 2017. The decline in shipments adds to the likelihood of Japan’s economic expansion weakening this quarter after a surge in the three months through June.

Typhoon Jebi in September closed a major airport that is the departure point for around 7 percent of shipments from the manufacturing heartland around Osaka. An earthquake in Hokkaido cut power to the entire island in Japan’s north, disrupting supply chains.

-The value of exports fell 1.2 percent in September from a year earlier, versus a forecast 2.1 percent gain, data from the finance ministry showed Thursday.
-Imports increased 7.0 percent, compared with estimates for a rise of 13.7 percent, maintaining gains that have only been interrupted once since the start of 2017.
-The trade balance was a surplus of 139.6 billion yen ($1.2 billion), defying expectations for a deficit of 45.1 billion yen.

Exports to China, Japan’s largest trading partner, fell 1.7 percent, only the third time they’ve declined in the past two years. Shipments to the U.S. and Europe also decreased. 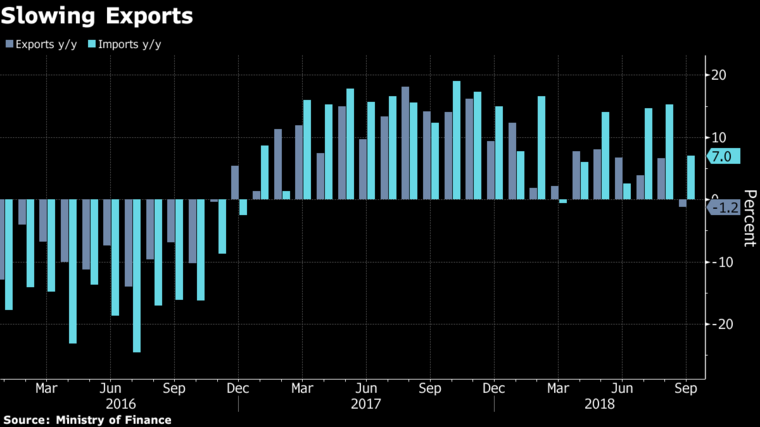 “Exports have clearly been slowing down so this probably isn’t just about natural disasters,” said Norio Miyagawa, an economist at Mizuho Securities Co. “It partly reflects some weakness in the global economy, including China.”

He added that it was too early to determine the impact of the U.S.-China trade war on Japanese exports.

“Net exports probably remained a drag on GDP growth in the third quarter,” Capital Economics’ Marcel Thieliant said in a note. “It now looks likely that economic activity came to a standstill in Q3.”

Separately, the U.S. Treasury in a report overnight said it remained concerned about the persistence of a large trade deficit with Japan. It left the country on its currency watch list, along with China, South Korea, India, Germany and Switzerland.

Exports to the U.S. slipped 0.2 percent in September while those to the EU decreased 4.1 percent.
Source: Bloomberg