The verification by DNV follows extensive research, production and testing by KTI with end users Keppel Offshore & Marine (Keppel O&M) and technology partners AML3D and confirms that the component has met all the primary test requirements in KTI’s project material specification with satisfactory results.

Francois van Raemdonck, Managing Director of KTI, said “KTI has been working on this project with Keppel O&M, DNV and AML3D since 2019, and we are proud to achieve this endorsement. Keppel is transforming the way it harnesses technology and KTI is supporting this by collaborating with Keppel business units to innovate and create value. This is in line with Keppel’s Vision 2030, which includes leveraging advanced technologies to drive growth.”

Additive manufacturing (AM) – the industrial equivalent of 3D printing – is an emerging technology which uses 3D model data to fabricate parts, enabling, among other benefits, significant time savings. Wire Arc Additive Manufacturing, or WAAM, has the potential to enable a productivity step change in shipbuilding, and is able to 3D print marine grade metal structures at a scale well beyond other commercially available metal 3D printing technologies.

Aziz Merchant, Executive Director of Keppel Marine & Deepwater Technology, the technology arm of Keppel O&M, said “Keppel O&M is constantly exploring new technologies to stay ahead in the industry and additive manufacturing has the potential to increase the efficiency of shipyard operations. The 3D printing of the Panama Chock shows that large components can be made available with shorter lead times and with equal standards of quality and performance. We are encouraged by the verification and we look forward to exploring how AM can be implemented on a wider scale.”

As part of the qualification process a 1,450 kg Panama Chock was designed and produced to meet international standards and KTI’s project specific material specification. Material yield strength was twice that of the original cast material and was produced with acceptable internal soundness that was confirmed by various non-destructive testing and evaluation methods. The part was then proof load tested to 20% higher load than its design working load. Following the successful load test, non-destructive and destructive testing, the results were reviewed by all parties before the final verification statement was issued.

“It’s pleasing to see further advances within the offshore and marine industry with this development for the world’s largest 3D printed shipboard fitting. Creating trust is critical for the acceptance of 3D printed parts and DNV’s certificate plays an important role in ensuring that this is the case” said Brice Le Gallo, Regional Director, Asia Pacific Energy Systems at DNV. 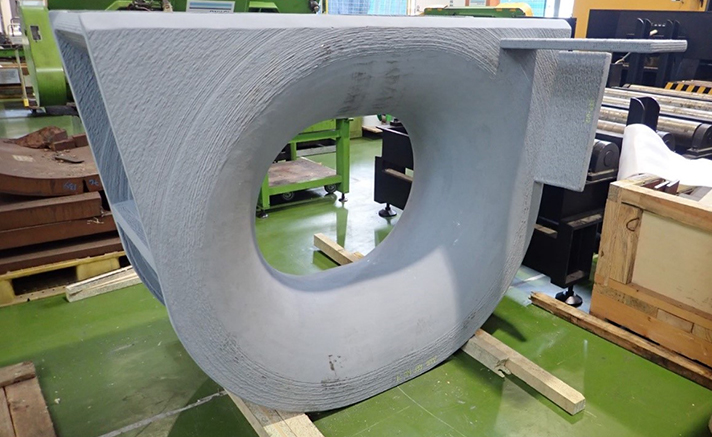 Dr. Sastry Kandukuri, Senior Principal Materials Specialist, Energy Systems at DNV, added: “I am very happy our Global Additive Manufacturing Technology Centre of Excellence was able to support KTI to reach this milestone. Our team of multidisciplinary experts across DNV with a combined AM service experience of 20,000+ hours look forward to continuing to work together with KTI as they develop and qualify AML3D’s WAM® 3D printing capabilities.”

AML3D Chief Executive Officer, Andrew Sales said, “We’re proud to have been able to partner with KTI and demonstrate the advantages of our patented Wire Additive Manufacturing (WAM®) capabilities in the creation of the world’s largest 3D printed Panama Chock. Additionally, we are equally as excited to see this WAM® printed component receive official verification by DNV. This now offers a quality assurance pathway for a wide range of components that can follow a similar validation process. It is a fantastic achievement by DNV, KTI, the AML3D team and our other partners in this project. Working with KTI’s vision for implementing AM has been a further endorsement for our own business model and we’re excited for the future.”

The Panama Chock produced through additive manufacturing was comprehensively function tested to 20% above its design load, by DNV’s laboratory partner

Throughout the production and testing processes, there was close and collaborative engagement between DNV, KTI and AML3D. Factors such as functional specifications, safety, testing procedures and acceptance criteria were all subjected to scrutiny by experts.
Source: DNV https://www.dnv.com/news/keppel-receives-dnv-verification-certificate-for-the-world-s-largest-3d-printed-shipboard-fitting-206884