Key events in EMEA next week

Labour market data is due from Hungary next week, and we expect further signs of strength. The unemployment rate should remain around 3.9% as labour shortages are mounting and companies are having a hard time filling vacancies. Wage growth will rebound in July from a low rate in June, which was impacted by the high base from last year due to one-off salary payments to healthcare workers. The Manufacturing PMI will probably mirror what we saw in the eurozone: a mild deterioration signalling a slowing pace of growth in the sector.

Russian activity data for August is subject to uncertainty. On the positive side, there is a lower base from August 2020, low unemployment, and we have the first portion of social handouts that were dispersed in August-September this year. On the negative side however, outward foreign tourism is growing, potentially limiting local consumption. Industrial output has also been disappointing, decelerating to 4.7% year-on-year in August, below consensus and our expectations despite a recovery in oil production. We continue to expect a moderation in the overall activity trend, as Russia has already reached pre-pandemic levels of employment, industrial production, and consumer activity in most segments, while the scope for fiscal and monetary support is limited. Inflation, which climbed to 7.0% YoY recently and may exceed this level by the end of September, will keep the central bank and the local debt market on their toes, at least in the near-term. 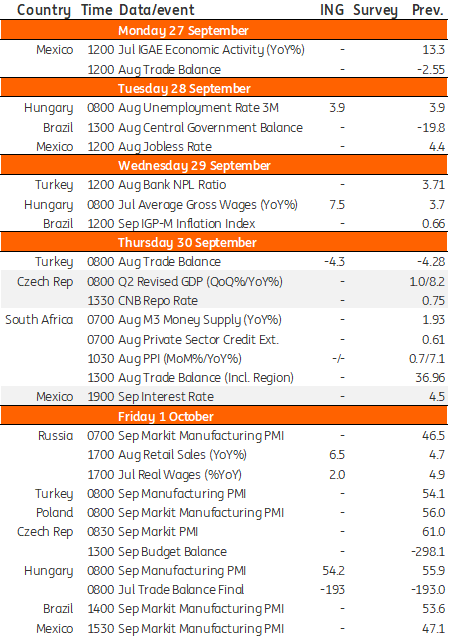