Key events in EMEA next week

The Russian key rate decision on 22 October will be in focus, as the acceleration in CPI– to 7.4% year-on-year in September and to 7.6% YoY as of mid-October – has crushed the previous Bank of Russia expectations of 5.7-6.2% CPI for year-end. This will likely force the monetary authorities to exceed the normal step of a 25 basis point hike at the forthcoming meeting. We now expect year-end CPI to reach 7.0% YoY, while the government and some market participants are even more aggressive, forecasting 7.4% or higher. Market expectations for the key rate hike are in the 50-100 basis point range but we are on the cautious side, as the rate has already increased by 250bps year-to-date and CPI expectations for 2022 are likely to play a bigger role in current decision making. Inflation expectations of households and corporates stabilised in September, and new data will not be released until 25 October, after the key rate meeting. The official CPI forecasts for 2022 (4.0-4.5%) are unlikely to suffer as big a revision as that seen in 2021 given the contribution of temporary supply-side factors to the current spike. At the same time, given the continued deterioration in the global inflation picture, we expect the Central Bank of Russia to reiterate its hawkish signal, meaning that the rate hike cycle will not be over on 22 October.

Hungary: Central bank skewed to the hawkish side

Next week’s main event in Hungary is the National Bank of Hungary’s rate setting meeting. Although officials highlighted at the September meeting that the latest 15bps rate hike is indicative for the next couple of meetings, we think the central bank will diverge from that message. The main reason is inflation. First of all, the September inflation data was higher than the NBH forecast, while inflationary risks have remained clearly tilted to the upside. The price impact of the energy crisis is clear, and while we can see some downside risk to economic activity here, this is less clear than the inflationary impact. Against this backdrop, we see the NBH hiking the base rate again by 30bps, moving it to 1.95% along with the whole interest rate corridor, and the 1-week deposit rate. The press statement’s tone will remain skewed to the hawkish side, with the NBH possibly eyeing some long-lasting impact on the forint, as the currency has not been trending higher despite the ongoing rate hike cycle since June.

Next week will bring a solid set of data on the Polish economy in September. First, the National Bank of Poland will publish core inflation figures, which we estimate at 4.1% YoY after 3.9% in August, as goods prices are on an upward trend. Next, the statistics office will release labour market data. In our view, employment growth slowed to 0.6% YoY. This is due to a mismatch between demand and supply. The number of new job offers has remained high for several months, but employers are looking for specific competencies that may be in short supply. Employers are willing to pay well for relevant skills, hence our wage growth forecast is slightly higher than the consensus. We also expect to see figures for industrial production. Problems in delivery logistics and component shortages leading to some production stoppages should drag on production slightly more than indicated by the median forecast. Due to supply-chain problems we do not expect any strong acceleration in retail sales. People have to wait for months for some goods, such as cars. In addition, consumers are still benefiting from the greater availability of services that are not included in retail sales results.

While the Central Bank of Turkey recently cut interest rates and signalled that it is ready to cut further, we think this will be hard to deliver given that inflation is close to 20% and five out of six core inflation indicators are above of the policy rate. Accordingly, we expect the CBT to remain on hold this month, though it could act again when the drop in annual inflation becomes more pronounced amid strong base effects in the period ahead. 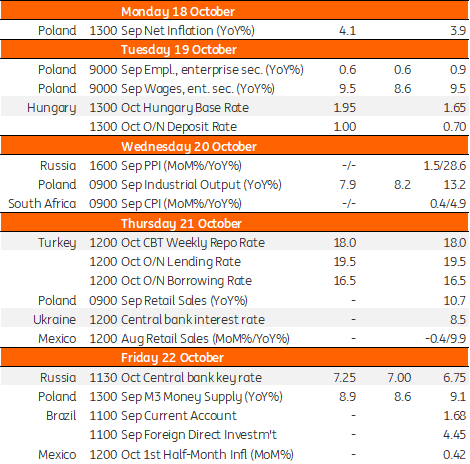