With a capacity of 21,000 TEU, SOLAR, which arrived on May 25, is the largest ship ever to call at Khalifa Port. The PISCES, which called on May 5, held the same accolade for just under three weeks with its capacity of 20,000 TEUS. The arrival of the ships , which started their journeys from Qingdao in China, highlights Abu Dhabi’s position as a major trade hub along China’s Belt and Road Initiative (BRI). 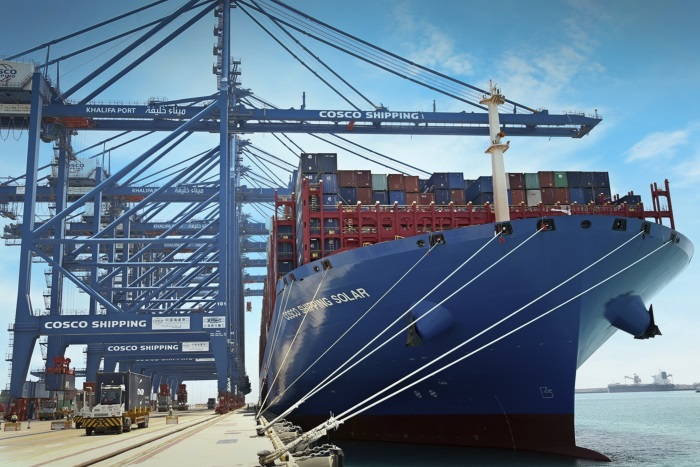 Captain Mohamed Juma Al Shamisi, CEO of Abu Dhabi Ports, said: “The arrival of both the MV. COSCO SHIPPING SOLAR and PISCES is a milestone moment for Abu Dhabi Ports and its partner, CSP. Not only does it demonstrate our growth as a hub port in the region, but also our position as the heart of COSCO’s network in the Middle East.

“The container industry is constantly looking for ways to improve efficiency, and the use of mega-vessels to cut costs and time is a trend shaping the future of the sector. We have ensured that through CSP Abu Dhabi Terminal, Khalifa Port is able to handle the largest vessels of today and adapt to those of tomorrow.”

Captain Ju Weiping, CEO of CSP Abu Dhabi Terminal, said: “We are excited to facilitate the arrival of two of the world’s largest mega-vessels at CSP Abu Dhabi Terminal as it demonstrates the strength of our partnership with Abu Dhabi Ports. The terminal has been built to accommodate the evolution of trade in an increasingly competitive global economy; applying the latest port technologies to improve efficiencies, reduce calling times, and ultimately deliver a competitive edge to our customers. We are proud to contribute to facilitating trade in the region and look forward to welcoming further large-scale vessels over the coming years.”

Abu Dhabi Ports is the operator and manager of the Emirate’s commercial and community ports, as well as Khalifa Industrial Zone (KIZAD). The CSP Abu Dhabi Terminal, which was inaugurated in December, connects Khalifa Port to CSP’s global terminal portfolio covering 285 berths at 37 ports worldwide.

The CSP Abu Dhabi Terminal has a design capacity of 2.5 million TEU, with 1200 metres of quay. The water depth of the terminal is 18 metres, allowing it to accommodate mega-vessels typically carrying in excess of 20,000 TEU. CSP has invested AED1.1 billion in capital expenditure on construction and machinery at the terminal.