A few rays of hope can be found in the upcoming prospects of the tanker market, such as the positive impact of the coming 2020 low-sulphur marine fuel rule, which is expected to create new and lucrative trade routes. However, overall, long-term tanker earnings are predicted to be tempered by an overwhelming tonnage oversupply, as a result of heavy newbuilding ordering activity. In its latest analysis, shipbroker Charles R. Weber commented that “this month, for the first time since December 2015, all three crude tanker size classes have seen average earnings exceed levels observed during the same month a year earlier. Examining earnings in this way factors for the high degree of seasonality characteristic to the spot tanker market and thus could potentially mark an important turning point in the economic cycle.

According to CR Weber, “breaking the 32‐month long losing streak did not come easily. In December 2015, the VLCC, Suezmax and Aframax orderbooksstood, respectively, at 17%, 23% and 18% of their existing fleets at the time. As the onslaught of these deliveries continue to be worked through, crude tanker carrying capacity has expanded by 11%. Greater fleet growth levels would likely have been logged, were it not for an unexpected rise in demolition values that, against several months with earnings frequently below OPEX, hastened the exit of a number of older units that would likely have continued to trade otherwise. A surge in demand that commenced in May appears to be factoring heavily into the positive turn. US crude exports have been a key contributor thereof, lending fresh demand across the slate of crude tanker size classes and presenting an important ton‐mile multiplier given the medium/long‐haul and extra‐regional nature of US crude export cargoes. VLCCs, for instance, have observed a 478% YTD Y/Y increase in demand to service US crude exports, which factors heavily into an observed 7% YTD Y/Y ton‐mile demand growth. The growth appears to be incremental as well and whereas VLCC ton‐miles contracted by 4% y/y during 1Q18, they grew by 11% y/y during 2Q18 and are poised to observe a 15% y/y rate of growth during 3Q18. The rise of US exports has exerted similar influence on Suezmax and Aframax demand. These classes have observed y/y demand gains in the USG region of 254% and 80%, respectively”. 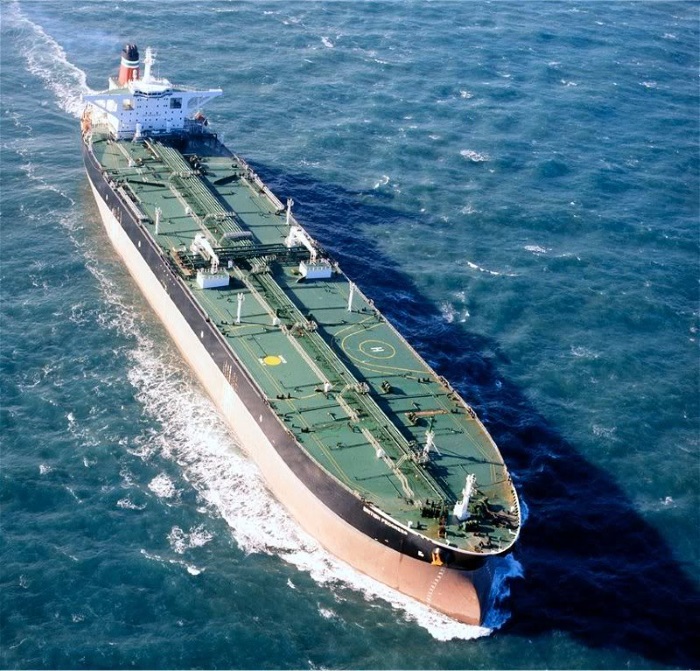 CR Weber added that “US crude exports were not expected to rise to the levels they have until the end of the decade, meaning that the degree of export growth being observed is, from the perspective of 2018 at least, very much a wildcard event. Other factors influencing the improving spot earnings include rising crude cargoes in key Aframax markets, including regions that service Russia’s seaborne crude supply, which has been rising in recent months as their commitment to the OPEC/Non‐OPEC supply curbs that commenced in January 2017 started to wane even ahead of the relaxing of curbs this past June. Moreover, Aframax demand for lightering activities to service US crude exports is helping to keep the class’ supply in check. As we explored in the Weber Market Vision Report on 8 August, despite a number of planned and proposed projects to enable greater direct USG‐area loadings of VLCCs and Suezmaxes, few of these are likely to be completed anytime soon”. 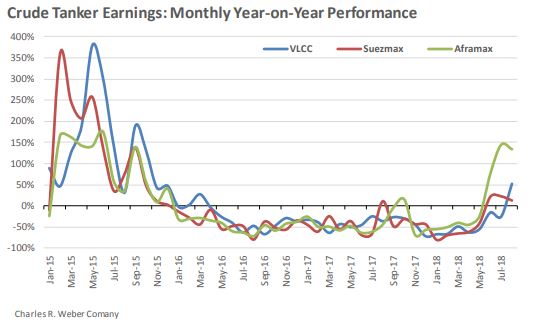 Where to from here?
According to the shipbroker, “the demand trends that have enabled the crude tanker market’s bounce from 1H18 lows are unlikely to evaporate anytime soon. US crude exports remain at directional strength, benefitting all three size classes. A continuation of this trend is expected in intermediate‐term, before US crude production and exports level off early during the next decade. With these cargoes being heavily oriented to extra‐regional destinations, we expect to see greater instances of supply disparities between regional markets, maintaining rate volatility amid greater competition between the regional marketsfor tonnage”. 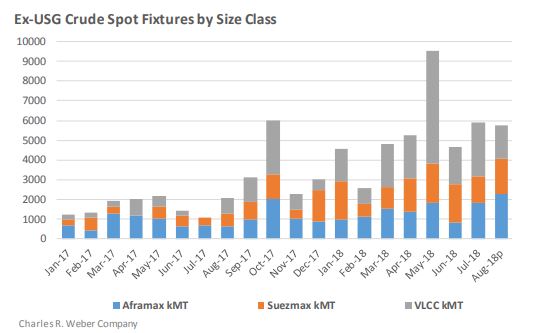 Meanwhile, “in the run‐up to IMO 2020 sulfur regulations, fuel oil cargoes are expected to start migrating towards complex refineries that can reprocess it to yield higher‐end products, creating new trades. Simultaneously, demand may also be stimulated by the projected refinery uptake growth to meet greater distillate demand to ensure adequate supply ofsulfur‐content compliant fuels. This could also create a crude storage play opportunity during 2H19 by creating a steep contango curve – as well as enabling fuel oil storage demand in the period where bunker suppliers destock the grade to make way for compliant fuels. Nevertheless, significant challenges remain. In the VLCC space, rising Middle East OPEC crude supply could bode poorly for the class by reducing the volume of Asian crude imports sourced from distant locations in the Atlantic basin, thereby threatening ton‐miles. Meanwhile, with the VLCC orderbook remaining high with 16% of the current fleet on order and deliveries thereof heavily distributed to 2019, we expect that the VLCC fleet will grow by 7.3%, which would represent the largest growth rate in decades. For its part, the Suezmax class is projected to grow by a further 2.9% during 2019 – and as the class remains the most supply‐side challenged of its crude tanker peers, any further growth will be difficult for the market to absorb. These factors, among others, temper the extent of earnings improvement we expect during the balance of this decade”, CR Weber concluded.
Nikos Roussanoglou, Hellenic Shipping News Worldwide