Oil gave up all of its gains in the last half hour of trading and skidded to a loss as a smaller-than-expected decline in U.S. crude stockpiles revived fears of a global glut.

The U.S. Energy Information Administration said earlier in the day that American crude inventories had fallen 1.21 million barrels, well below the 10.2 million cited in an industry report Tuesday that had raised oil bulls’ hopes. While record U.S. gasoline exports kept prices higher for at time, sellers gained momentum as trading drew to a close.

“It raises the question of whether the OPEC cut is going to be enough to ease pressure on the market,” said Gene McGillian, market research manager at Tradition Energy in Stamford, Connecticut. “I think the uncertainty is beginning to become clear.” 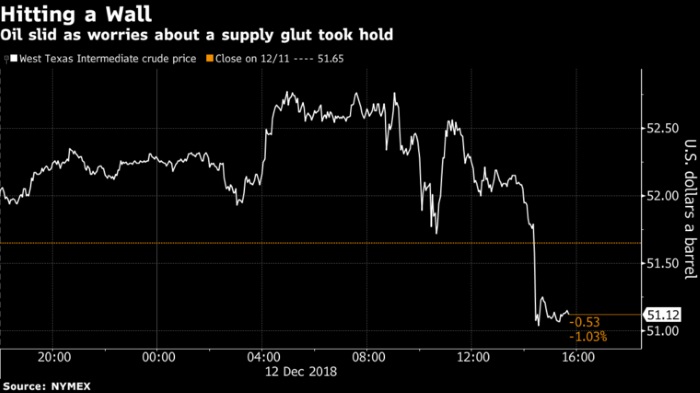 West Texas Intermediate for January delivery closed down 50 cents at $51.15 a barrel on the New York Mercantile Exchange, after earlier climbing near $53. Total volume traded Wednesday was 23 percent above the 100-day average.

Brent for February settlement settled at $60.15 a barrel, 5 cents lower, on London’s ICE Futures Europe exchange, after moving as high as $61.43. The global benchmark crude traded at an $8.79-a-barrel premium to WTI for the same month.

The reversal for crude coincided with a loss of momentum in equity markets. Stocks gave up some of the gains that had been spurred by signs of easing trade tensions between China and the U.S.

“I’m pretty sure the market doesn’t know what to think,” said Bart Melek, head commodity strategist at TD Securities in Toronto. For a sustained oil rally, “you need someone to get long and right now I think everybody is gun-shy.”
Source: Bloomberg