When Carnival bought their first cruise ship Mardi Gras in the 1970’s, nearly 50 years ago, and registered her under the Panama flag, nobody expected that a new Mardi Gras will be built 50 years later, breaking records again and keeping the tradition of flying the Panama flag.

In a recent ceremony at the Meyer Turku shipyard, The Mardi Gras, left the dry dock to be positioned in the water en-route to her new location to finalize its interior and exterior outfitting.

With a capacity for 5,282 passengers, Mardi Gras marks a milestone for both Carnival and the Panama Registry. Carnival has a total of 20 Cruise Line vessels registered in Panama, including Mardi Gras.

Mardi Gras, the largest ship in the Carnival fleet, is an Excellence-class cruise and she will be the first representative of Carnival’s XL class, a subclass of Excellence class. Two more sister ships are expected to be delivered beginning of 2022. 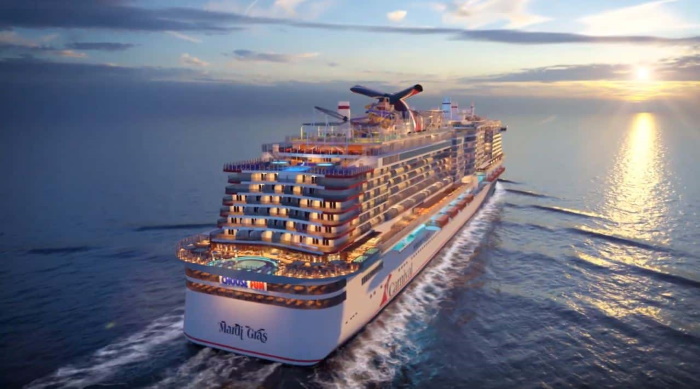 Not only her size is impressive- more than 1,130 ft of length and 180,000 gt- but also the new spaces created not seen before on a Carnival ship, with brand new stateroom categories and even the propulsion. She will be the largest ship in the Carnival fleet.

She will also be the first Carnival ship, powered by liquefied natural gas (LNG) thanks to a considerable investment in infrastructure made by Port Canaveral, her home port. The cruise ship will be able to be refueled by a new LNG bunkering barge, the Q-LNG 4000.

Mardi Gras will be the world’s first cruise vessel to offer a roller coaster for entertainment. The Bolt, the first roller coaster at sea, will be installed in the coming weeks as part of the Ultimate Playground outdoor recreation area. The ride consists of self-propelled cars that can travel up to 40 mph (64 km/h) around the funnels.

The 2,600-cabin ship is scheduled to be delivered in late October, with cruise scheduling starting on 14th November.

The Panama-flagged cruise ship vessel will sail all year-round, offering seven-day cruises to the Caribbean and the Bahamas, from her home port in Port Canaveral, Fla.

“We can’t wait for our guests to experience Mardi Gras, a one-of-a-kind ship that is true game-changer and continues the evolution of the Carnival vacation experience,” said Ben Clement, Carnival Senior vice-president of newbuilds.

“It is an honor for Panama to count with Carnival’s support for nearly half a century, and to have such cruise ship among our fleet, specially an LNG-powered ship, the first of her kind. Welcome Mardi Gras to Panama,” said Rafael Cigarruista, head of Panama Registry.
Source: Panama Maritime Registry

2020-02-03
hellenicshippingnews..
Previous: China – Operational Impact due to Coronavirus, Lunar New Year Holidays Extension
Next: Far ahead of the sustainable curve