The expectation of concretion of the Brexit, the entrance of Brazil in the OECD and Colombia in just a step of following the same way, are factors that are transforming the global commerce and the geopolitical dynamics. In the midst of the threat represented by the commercial dispute between the United States and China and the crisis in Venezuela, the main economies of Latin America are going through unique moments in their histories. Argentina due to an economic crisis, price freezes and rate increases, Brazil with the expectation of the financial market before pension reform, and Mexico towards a scenario of deceleration and readjustment in its projections that shows greater uncertainty.

The projection for industrial production for the year decreased in most of Latin America and the Caribbean countries in April, and the expectation regarding consumer prices in the region also declined in most of the countries, except in Brazil and Argentina. Although the region’s steel market during January-February 2019 showed a 3 percent drop in the consumption of finished steel compared to January-February 2018, the regional production of crude and finished steel in March fell by 11% and 8%, respectively compared to March 2018, showing precisely global and regional economic uncertainties. 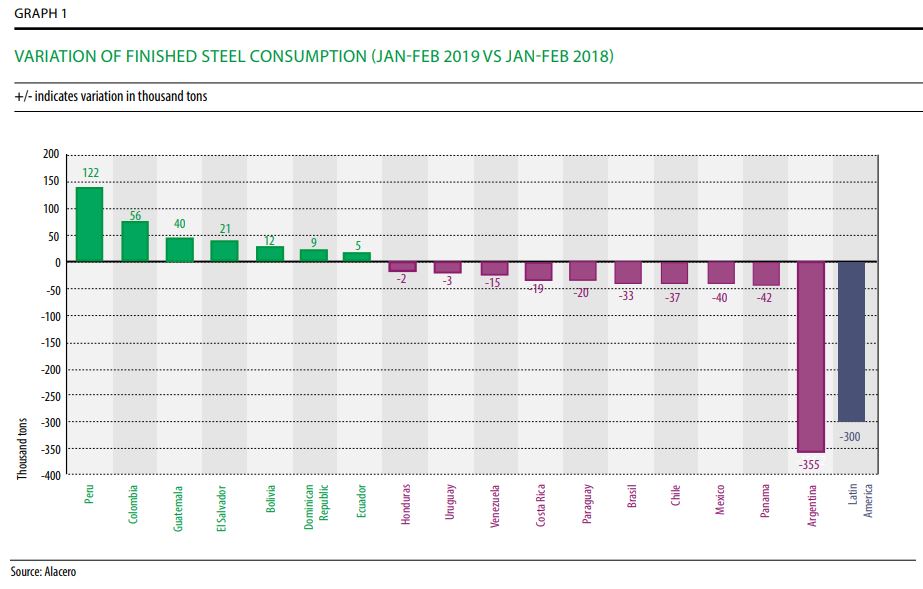 Trade balance faces fall in February
Considering the last year, from April 2018 to April 2019, there was a considerable fell of the GDPs in Latin America, with the exception of Brazil, Argentina and Chile. In this period, the gross fixed investment also decreased, although Chile and Colombia recorded progress. Industrial production grew, however, Mexico, Peru and Venezuela could not follow the same pace. Consumer prices also saw increases in most of the region, except in Mexico and Argentina.

Imports. In February, 1.8 Mt of finished steel were imported, 8% more than in February 2018 (1.7 Mt). In the cumulative of January-February 2019, Latin America imported 3.8 Mt of finished steel, 2% more than the imported in the same period of 2018 (3.7 Mt). Of this total, 70% correspond to flat products (2.6 Mt), 27% to long products (1.0 Mt) and 3% to seamless tubes (123 thousand t). Currently, finished steel imports represent 36% of the region’s consumption, which brings with it disincentives for the local industry, commercial frictions and puts employment sources at risk.

Brazil is the only country that maintains a surplus in its finished steel trade in January-February (594 thousand t). Conversely, the largest deficit was recorded in Mexico (-1.1 Mt). It was followed by Colombia (-362 thousand t), Peru (-316 thousand t) and Chile (-273 thousand t). The evolution of the trade flow is presented in Graph 02. 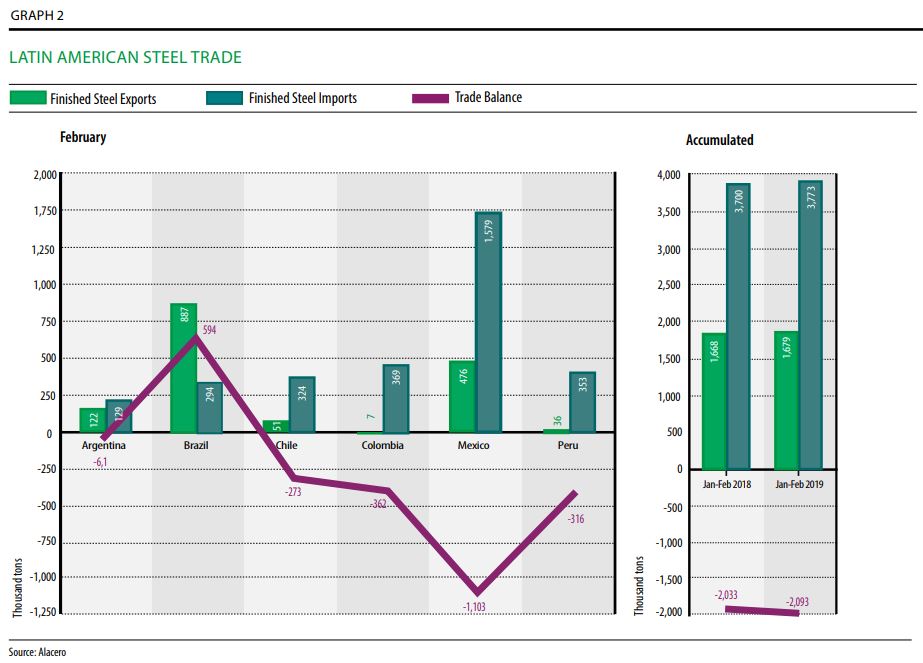