The two dominant players in Latin American oil and gas – Petrobras and Pemex – should face negative net gasoline balance for decades to come. This makes the two NOCs the most important Latin American importers of US gasoline, granted that Brazil’s deficit is mitigated by its strong biofuels market.

Their corporate strategies, however, are completely different. With the election of President Bolsonaro, Brazil’s Petrobras is embarking on a neoliberal push in the downstream segment. The company plans to sell half of its refineries, opening up the Brazilian market to outside competition.

In Mexico, President López Obrador may not be calling off the 2013 energy reform completely, but he is not moving the plan further either. His agenda has Pemex strengthening its role in refining through the National Refining Strategy. The plan includes the construction of a new refinery in Dos Bocas, Tabasco, and the revamping of its six existing plants. Both companies are highly leveraged, which means every move counts. 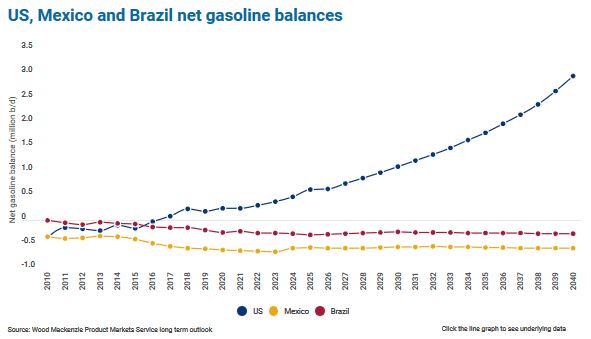 The Pemex strategy: ramp up refining
Mexican refineries have struggled with a combination of old age, lack of maintenance and natural disasters that impede operations. We forecast close to a 600 kb/d gasoline shortfall in Mexico through 2040. Meanwhile, President López Obrador aims to reduce gasoline imports to zero.

López Obrador’s strategy involves the unprecedented plan to build a new refinery from scratch. The planned 340 kb/d facility would process only heavy Maya crude, unlike the rest of Mexico’s refining capacity, which runs an Isthmus-Maya blend.

Our modelling suggests that the new refinery will not be enough to fill the ongoing gasoline shortfall. Furthermore, the government’s timeline is aggressive. With hopes to start operations within three years, the government voided tenders from foreign engineering firms vying for the project, as their construction timelines were too long. The project to build the US$8bn refinery was assigned to Pemex instead.

In our new insight, The risks of investing in haste fall to Pemex, we explore the questions surrounding Pemex’s massive new project. Will it fill the country’s shortfall, and more importantly, can it be done for the price and speed Mexico’s government wants?

The Petrobras plan: divestment, but with limited market traction
Asset sales are a key plank of Petrobras’ strategy. The move aligns well with its corporate goals – debt reduction and oil production growth. By selling non-core assets, Petrobras can pay down debt and continue to invest in its upstream business without accessing debt markets.

The move also reduces Petrobras’ exposure to Brazil’s politically charged downstream sector – fuel price rises to match international rates have led to strikes and government interference in the recent past when Petrobras had a monopoly refining position.

Under the new Bolsonaro administration, the 2019 divestment plan has a more aggressive approach than previous announcements. The guidelines outline the sale of eight refineries holding 50% of Brazil’s refining capacity (1.1 million b/d), a network of service stations in Uruguay and a stake (or partial sale) in the distribution company Petrobras Distribuidora.

In our new insight, Petrobras downstream divestment plans: will this second attempt be successful?, we explore whether this new divestment plan gains momentum as well as market concerns towards fuel pricing policy in Brazil.
Source: Wood Mackenzie

2019-05-17
hellenicshippingnews.
Previous: U.S. coasts face tight gasoline supplies ahead of summer driving season
Next: Risks are rising for an oil price spike as tensions between the U.S. and Iran increase