Growth may lose momentum in the OECD area as a whole over the next six to nine months, according to the latest OECD Composite Leading Indicators (CLIs). The latest leading indicators, which aim to anticipate cyclical fluctuations in economic activity, support the view presented in the latest OECD Economic Outlook, which revised global growth forecasts downwards due to the impact of the war in Ukraine and continued supply-chain disruptions.

The CLIs are now either at or below long-term trend levels in most major OECD economies. Pushed down by high inflation and very low consumers’ confidence, the CLIs point to a loss in growth momentum in the euro area as a whole, including in Germany, France and Italy, and also in the United Kingdom and Canada. In contrast, the CLIs continue to point to stable growth in the United States and Japan. 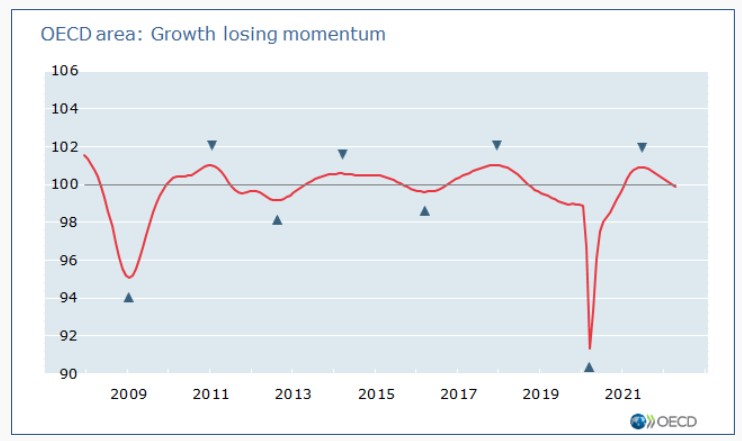 Among major emerging economies, the CLIs now point to growth losing momentum in China (for the industrial sector) and slowing growth in Brazil, but stable growth in India.

Ongoing uncertainties related to the war in Ukraine and COVID-19 are resulting in higher than usual fluctuations in the CLI components. As a result, the indicators should be interpreted with care and their magnitude should be regarded as an indication of the strength of the signal rather than as a measure of growth in economic activity. The CLIs aim to anticipate cyclical fluctuations in economic activity over the next six to nine months based on a range of forward-looking indicators such as order books, confidence indicators, building permits, long-term interest rates, new car registrations, and many more. Most indicators are available up to May 2022.
Source: OECD