The ship recycling market continues to be plagued by the letter of credit issue, which has taken a toll on some yards in the Bangladeshi market. In its latest weekly report, shipbroker Clarkson Platou Hellas said that “another quiet week has been witnessed in the recycling industry with the lack of available units continuing to frustrate the recyclers. The Bangladeshi domestic steel market inches up day-by-day this week which should see some increase in price indications, however sentiments of the actual recyclers remain weak largely due to the L/C issues which prevails in the country for the opening of the Letters of Credit with, still only a certain number of end users (recyclers) able to open L/C’s with a higher value. India remains sluggish with plate prices stable and whilst there is demand, price levels are expected to rise on the back of emptying recycling yards at Alang. The situation in Pakistan appears to be improving following the devastating floods that hit most of the country and the currency slightly strengthened against the U.S. Dollar”. 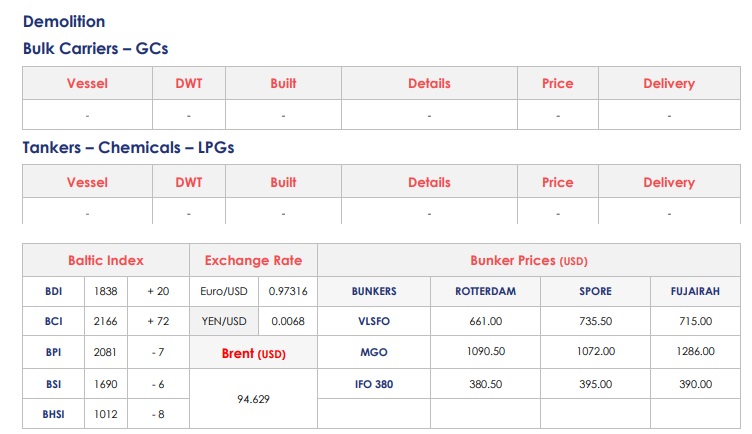 According to Clarkson Platou Hellas, “however, these recyclers are unable to compete at this current time with their counterparts from Bangladesh and India. All and sundry from the Ship Recycling world (recyclers/breakers, cash buyers, brokers), Ship Owners, Environmental groups amongst other business colleagues, will be congregating in Dubai next week for a return of the Annual Tradewinds Ship Recycling Conference. It will be interesting to see first-hand the continuing improvements from the recycling destinations and whether any further regulations have, or can be, implemented. With all industry players gathering in one area, it usually helps to stimulate the marketplace as has proven to be the case in previous gatherings and return some positive impact on the scene, however this year may be different to previous years”, the shipbroker concluded.

In a separate report this week, GMS (www.gmsinc.net), the world’s leading cash buyer of ships said that “any vessels that were made available over the past few weeks have swiftly been withdrawn as recycling markets show an ineptitude to offer any sort of serious numbers, having seemingly forgotten how to buy ships after a prolonged period on the sidelines Consequently, there have been no market sales for another week, especially as freight markets continue to impress across all sectors and recycling markets remain unchanged, depressed, and starved of tonnage all at once. Constant currency depreciations have been the chief culprit and there seems to be a lack of confidence to import vessels, with banks being much stricter on sanctioning precious U.S. Dollar Letters for Letter of Credit (L/Cs) for vessels for recycling. Most yards in India, Pakistan Bangladesh, and even Turkey, are therefore lying idle and will be expected to remain that way (likely) for the rest of the year, with sentiments and levels so depressed across the board. Demand for new vessels is firming, but at completely unworkable numbers for Owners and Cash Buyers alike, especially given the decent earnings that the majority of these ships continue to make. As such, for another week, the outlook across all sub-continent markets stays glum and gloomy, with little meaningful activity to talk of and deteriorating sentiments & pricing afflicting the industry”, GMS concluded.
Nikos Roussanoglou, Hellenic Shipping News Worldwide