What’s the current position of the Liberian Registry among the Greek-controlled fleet? 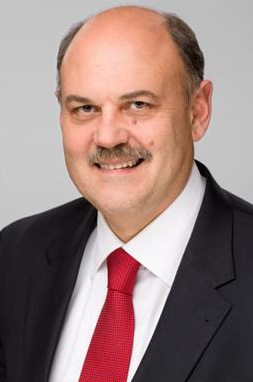 The Liberian Registry is the second largest –and fastest growing – ship registry in the world, behind only Panama. Michalis Pantazopoulos, Senior Vice-President and General Manager of the Liberian International Ship & Corporate Registry (Hellas) SA in Piraeus, told Hellenic Shipping News, “Other registries may choose to interpret the figures to their own advantage, but the facts are indisputable. Statistics recently released by the Greek Shipping Co-operation Committee (GSCC) and by Marine Information Services show that Liberia has further strengthened its position as the undisputed leading open registry of choice for Greek shipowners and operators.

“The GSCC statistics, based on information from Lloyd’s Register of Shipping-Fairplay, show that, in the year to end-March 2015, the number of Greek-controlled ships in the Liberian Registry increased by a net total of 61 vessels, more than any other registry in the world. In the process, the Liberian Registry moved closer to the Greek flag, which recorded a net total of 20 new registrations in the twelve-month period. 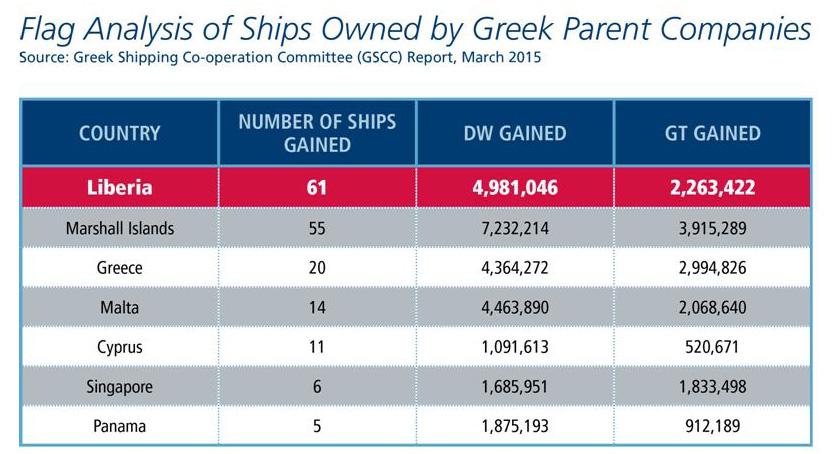 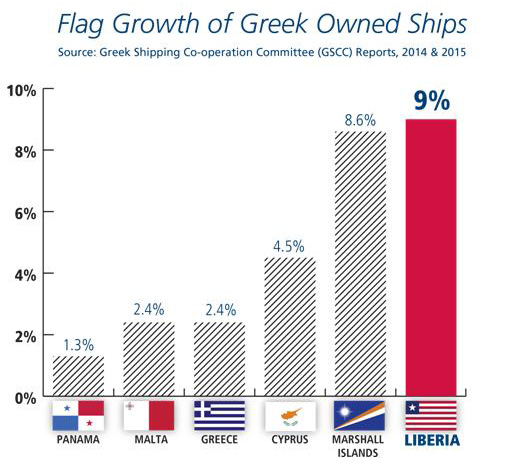 “Figures produced by Marine Information Services (MIS) in Greece, meanwhile, also show Liberia as the most popular and fastest growing flag for Greek owners and operators.

The relationship between the Greek shipping community and the Liberian Registry has grown stronger still during the worldwide economic downturn of recent years, during which shipowners and operators have looked to their ship registries for innovative solutions to help maintain efficiency and profitability. Greece remains the undisputed number one shipping nation in the world, and Liberia remains the number one flag of choice behind the Greek national registry. Liberia has played a leading role in the quality growth of Greek shipping, which is testament to the trust and respect which exists between the Greek shipowning community and the Liberian Registry.” 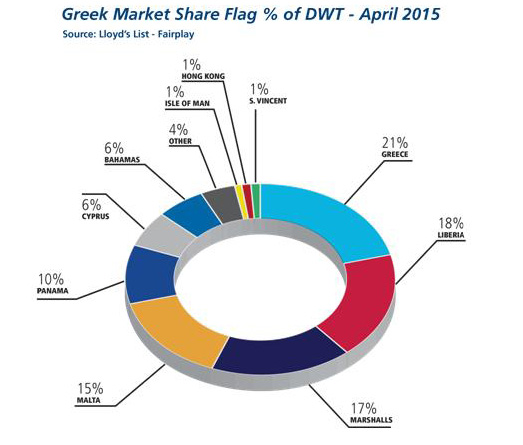 In terms of global market share, Liberia is in second place, behind Panama, with 198,800,000 dwt, or 12 per cent of the world fleet, more than 2 per cent ahead of the Marshall Islands in third place. 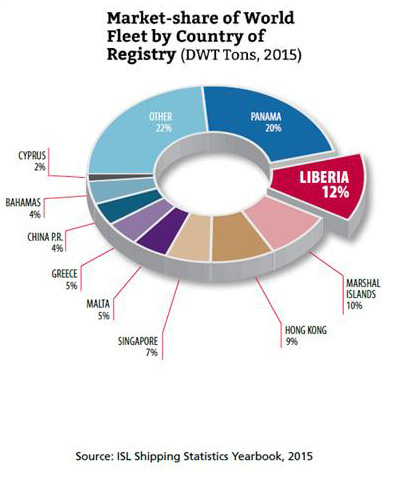 How much has the Registry grown in the past year, in terms of new vessel additions?

Which have been the factors behind this success and growth of the Registry?

Scott Bergeron, CEO of the Liberian International Ship & Corporate Registry (LISCR), the US-based manager of the Liberian Registry, says, “Liberia is the most proactive and innovative ship registry in the world. Its proven success is inexorably linked to the manner in which it uses the seagoing and shore-based experience and expertise of its dedicated staff to anticipate problems which have the potential to adversely affect ship owners and ship managers, and to maximize opportunities which may arise as the result of commercial and technical initiatives. 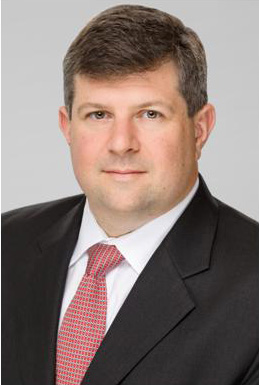 “The Liberian Registry has more than doubled in size over the past fourteen years. At the same time, it has strengthened its position as one of the safest and most quality-conscious flags in the world, consistently featuring in the White Lists of all independent arbiters of ship safety such as Port State Control and the US Coast Guard.

“Statistics from the Paris Memorandum of Understanding on Port State Control issued within the past six months confirmed Liberia as the best-performing major ship registry worldwide over the past three years. Liberia is also the most responsive ship registry in the world. It has a well-documented record for successful proactive intervention in incidents, and for publishing the reports of its findings where appropriate.”

In the past, open registries managed to attract ship owners through attractive pricing, but gradually focus shifted to quality of services. Today, which are LISCR’s competitive advantages in the market?

Scott Bergeron says, “The notion that ship registries can compete on price alone in today’s highly regulated shipping industry, and still retain a reputation for quality and safety, is as outdated as the continued insistence of certain organisations and individuals on the pejorative categorisation of any vessel registered in a country outside the domicile of its owner as a ‘flag of convenience’.

“Safety will always be the number one priority for the Liberian Registry. That, together with a commitment to providing the very highest quality of service and responsiveness, is the reason why the registry continues to expand so quickly and so successfully. It is significant that other registers have followed the example provided by Liberia in terms of industry-leading service initiatives. Imitation is the sincerest form of flattery.” 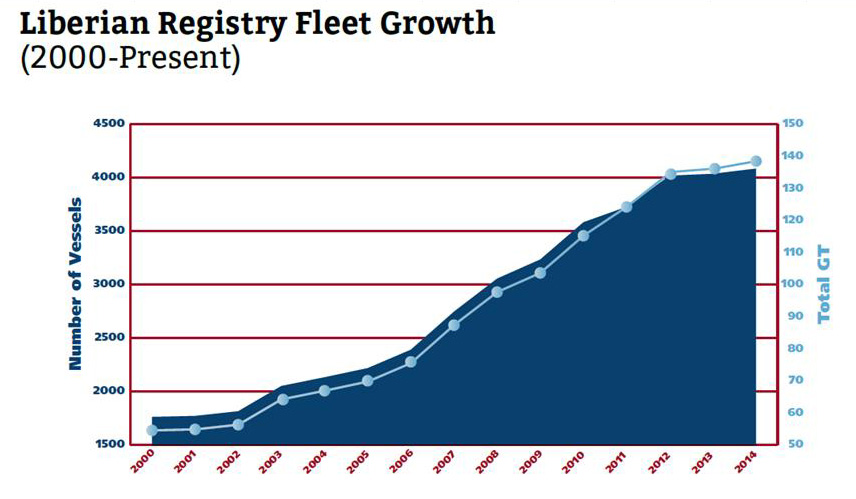 In terms of international presence and services provided, which have been the main initiatives from the Registry this past year?

Shipping is the ultimate international industry. So it is essential that key service providers such as ship registries are available at all times to ship owners and managers. Liberia coordinates its round-the-clock services from its US headquarters, but it also has dedicated offices in strategic shipping centres around the world. 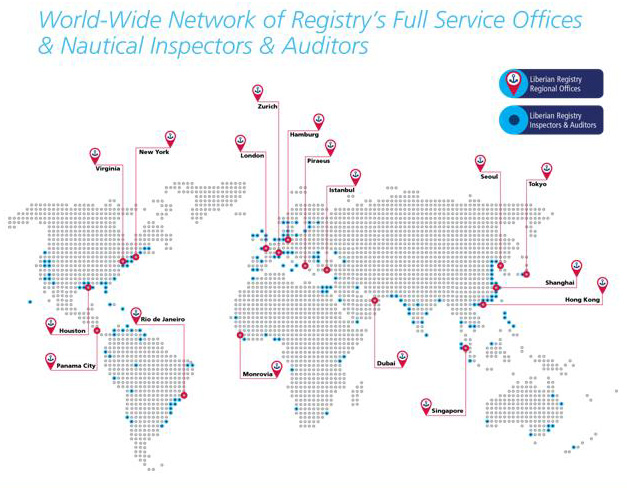 The registry has recently opened a regional office in Istanbul. In addition to this and its US operations in Virginia and New York, it has dedicated offices in Dubai, Hamburg, Hong Kong, London, Panama City, Piraeus, Rio de Janeiro, Seoul, Shanghai, Singapore, Tokyo and Zurich. These are no mere letter-box set-ups. They are established offices, staffed by highly experienced and respected industry personnel.

In terms of service initiatives provided within the past twelve months, Liberia has again been leading the way. In January of this year, Liberia acceded to the Nairobi International Wreck Convention on the Removal of Wrecks, 2007, becoming the largest flag state party to do so. The Liberian Registry has already processed over one thousand certificates evidencing the compliance of non-Liberian-flag ships with the Convention, in addition to certifying vessels flying the Liberian flag.

Michalis Pantazopoulos notes, “It says a great deal about the high regard in which the Liberian Registry is held, and indeed about the typically proactive approach to regulatory certification taken by Liberia, that so many ships from non-party states have registered with us. The Liberian Registry has also set up an online application process to help shipowners ensure that their vessels are in compliance with the requirements of the Convention. The owners of both Liberian-flag ships, as well as the owners of ships registered in states which are not a party to WRC, can apply for a Liberian WRC certificate online. The process is speedy and efficient.” 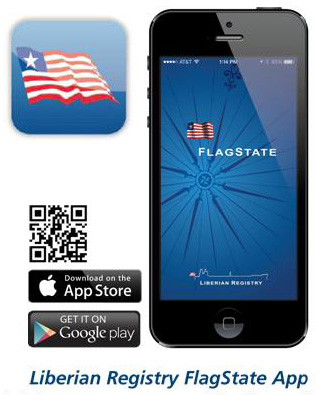 Other initiatives in the past twelve months have included the launch of a powerful state-of-the-art mobile application (app) to enable owners, managers, operators and others to communicate and interact with the Liberian Registry on a round-the-clock basis. Liberia’s FlagState App is now available for download in both the Google Play (http://bit.ly/NQnwgV) and Apple’s iTunes App Stores (http://bit.ly/1q0gKnS).

Also in the past year Liberia has provided significant help to affected areas in the fight to eliminate the Ebola virus, and has released its mandatory Maritime Labour Convention Annual Report for 2013, which confirmed the extremely low deficiency rate for Liberian-flag ships. Liberia has consistently led the way on MLC certification and was the first flag state to ratify MLC 2006.

These are just the most recent examples of the industry-leading role adopted by Liberia in its ongoing efforts to keep Liberian-flag ships operating safely and efficiently.

Given that new shipping regulations are constantly implemented around the world, which would you highlight as the most significant ones for ship owners over the past few months?

Scott Bergeron says, “Two of the most significant regulations ship owners must implement from 1 January 2015 relate to crew training and the use of fuel with a sulphur content of no more than 0.10%. Both regulations are intended to save lives and prevent deaths from poor air quality. Crew members with enclosed-space entry or rescue responsibilities will be required to participate in training drills that include identifying the hazards of entering spaces that lack adequate oxygen levels. Ship owners, meanwhile, face the challenge of ensuring that they have sufficient fuel tanks for the carriage of lower sulphur fuels, and to facilitate fuel changeover. The requirement with all maritime regulation is to provide uniform certainty throughout the global industry, and Liberia is committed to providing the expertise, knowledge and wherewithal to keep owners and operators fully in compliance with all regulations.”

Given the new ECA Zones which have already started operating, do you see any major problems in fuel procurement so far?

Scott Bergeron says, “Owners and operators are still evaluating the relative merits of different types of fuel and distillates, the use of scrubber technology, and fuel changeover procedures. Liberia will continue to work with them on finding the optimum solution to meet their particular needs.

“Meanwhile, Liberia’s recently launched environmental initiative designed to reduce global carbon emissions includes an add-on specifically crafted for Emissions Control Areas (ECAs). For ships trading within ECA zones, the programme may include the installation of exhaust scrubber systems or the conversion of engines to LNG dual-fuel.”

Previous: UK looking to cement its position as a leading maritime cluster
Next: Ship values can be hard to determine in today’s market conditions: VesselsValue new valuations service can be of service