The Aframax Mediterranean market stands to benefit from a potential recovery of Libya’s oil production, however difficult this may sound at present. In its latest weekly report, shipbroker Gibson said that “in recent years, despite holding the largest oil reserves in Africa and the 9th largest reserves in the world estimated at 48.40 billion barrels, Libya has gone from a top OPEC producer to struggling to maintain a consistent level of production and exports. Prior to the 2011 Libyan civil war, daily output was 1.6mbd; however, since then production has failed to return to this level, apart from a brief period reaching 1.55mbd just once in September 2012. This reflects the ongoing political instability in the country as competing factions fight for control of the country’s valuable oil fields operated by NOC”. 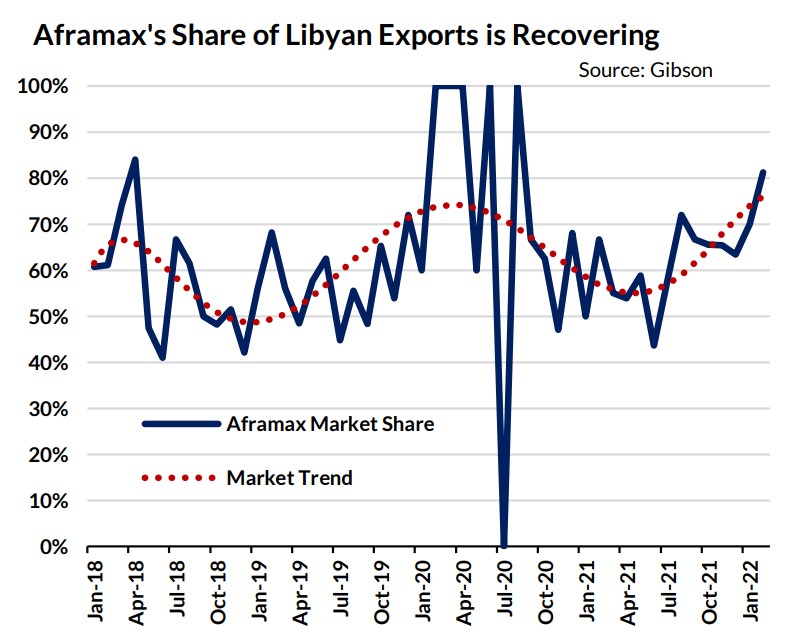 According to the shipbroker, “Libya’s challenges come at a time when OPEC+ is struggling to boost production across the board and oil prices continue to rally. As much as additional Libyan barrels would be welcome in the tight oil market, so too would be the export revenue for the country itself. This makes finding a solution to Libya’s oil woes more pressing and would be a shot in the arm for the Mediterranean Aframax market which has traditionally been an important facilitator of Libyan exports, although recent years have seen their share of exports go towards Eastern bound Suezmax tonnage. Since 2015, Aframax market share has averaged 68% versus 32% for Suezmaxes but fell to 62% from 2018 onwards as Suezmaxes became more popular. However, this year Aframax share has bounced back to 70% in January and 81% in February, indicating a growing appetite for Aframax tonnage for Libyan cargoes as increasing volumes are shipped across the Mediterranean to France, Spain, and Turkey. Regional players will hope this is the start of a longer-term trend and not due to short term factors such as refining maintenance/seasonal demand”.

“In terms of oil production, the outlook too is becoming more positive. IEA data indicates 2021 output averaged 1.1mbd, with estimated levels for Q1 2022 maintained at 1.1mbd and then increasing by 100kbd in Q2 and remaining stable for the balance of 2022. In January, the El Sharara oil field was producing 290kbd, a utilisation rate of 97% and just 10kbd below its full capacity of 300kbd. This data shows production may be stabilising, which will allow a gradual increase in output levels to be achieved. However, the recently postponed election and appointment of a second Prime Minister in the eastern region casts uncertainty over the ability to maintain stability”, Gibson said.

The shipbroker added that “this was evident during December 2021 as NOC was forced to declare force majeure on crude exports from Zawia and Mellitah oil terminals in response to blockades by the armed Petroleum Facilities Guards (PFG), owing to commercial disputes at the El Sharara and Wafa oil fields. Further action by the PFG and militia groups cannot be ruled out. This lack of stability means the target of increasing capacity to 2.1mbd over the coming years will be difficult. Boosting production to the targeted 1.45mbd by the end of 2022 and 1.6mbd by 2023 too is uncertain, even as rising oil prices give a strong financial incentive. With the level of investment needed to be estimated above $20 billion, it is unlikely Libya could finance this domestically at present. Therefore, foreign investment partnerships would be required; however, failure to secure nationwide stability makes this job harder”.

“If Libya can successfully pull off planned production increases, then this will offer a major boost for Aframaxes in the region and in turn support routes such as the cross Mediterranean trade. However, Libya has a long way to go in regaining its position as a major crude exporter and will require reform and political stability for this to happen. Both of which require a long-term political solution”, Gibson concluded.
Nikos Roussanoglou, Hellenic Shipping News Worldwide