Has it been a good year for shipping?

Shipping has faced another challenging year as excess yard capacity and the resulting surplus of ships has continued to weigh on spot and term market rates. However, green shoots are appearing, and several long term trends are developing that will reward those with the tenacity to stay in the shipping markets.

Has it been a good year for the global economy?

The shipment of goods around the world has been surprisingly resilient despite fears around the US China trade dispute. Media hyperbole has distracted from the relatively targeted nature of this dispute. To date, it has only significantly punished US soybean exports, a market that was already facing headwinds due to demand destruction in China following an outbreak of livestock disease. Much has been made of Capesize rate declines, but most of the factors affecting this are caused by export disruptions in the iron ore supply chain and reduced dependency on coal for power generation.

Other Dry Bulk segments have proved resilient due to the wider number of cargoes they can carry, and smaller ship types such as Supramax vessels are now earning more than twice the rates of Capesize vessels. VesselsValue (VV) has publicly commented on its optimism around small Dry Bulk carriers over the past six months relative to larger ships. 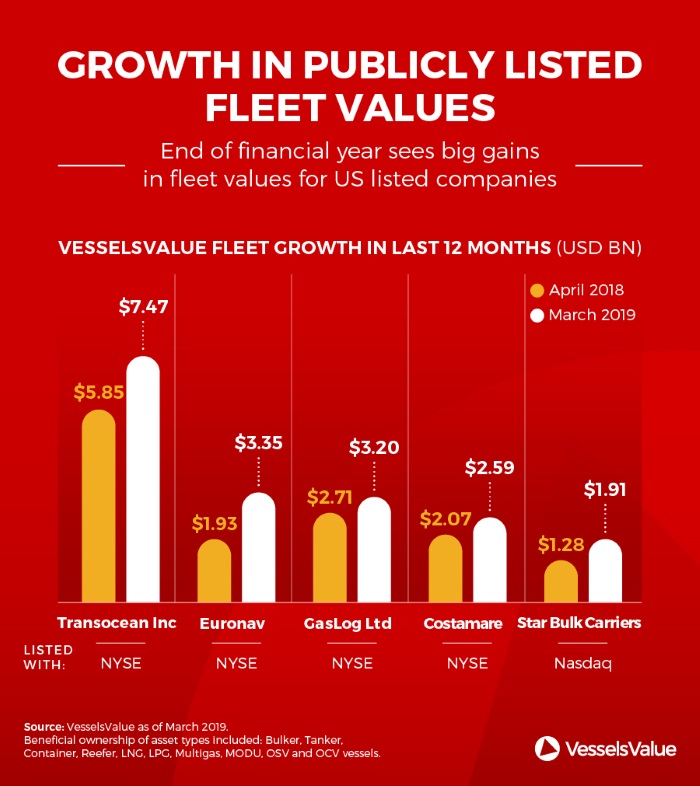 Let’s talk about this year’s winners

Star Bulk Carriers, GasLog Ltd, Euronav, Transocean Inc and Costamare have all experienced large growth in their VV fleet market value. The normal trend in markets is for established participants, or survivors, to lock up market share when in a down cycle as smaller transient players leave the space. Once the markets recover, those with large market share will receive an outsized reward.

2018/2019 saw Transocean Inc cement itself as the top publicly listed shipping company. This is due in part to the recent acquisition of George Economou’s Ocean Rig with its two harsh environment semisubmersibles and nine ultra deepwater high specification Drillships, plus two more of the latter currently under construction. The total cash and stock transaction was circa USD 2.7 billion. This was a strategic acquisition by Transocean Inc to take advantage of what they believe to be the recovery of the ultra deepwater market.

Euronav’s acquisition of Gener8 is a great example of the power of a large listed company to make a counter cyclical market play. This boosted the market share of Euronav significantly in the VLCC market space.

The biggest buyer in 2018 of second hand vessels is the Greek company Star Bulk Carriers. The vessels involved in the 2018 transactions were valued at just under USD 1 billion on the day of sale. Star Bulk have acquired vessels from a variety of sources: six Capesize Bulkers in a part share and part cash deal from ER Schiffahrt, 15 more Bulkers from Songa Bulk with USD 145 million cash plus 13.7 million shares, three Capesizes from Oceanbulk for 3.4 million shares, six Panamax and Post Panamaxes from Augustea Group in a debt and shares deal and another six from ABY Group Holding at the start of the year in another part debt, part shares deal.

What’s in store for publicly listed shipowners next year?

Cashflow volatility is always an issue. Investment funds often seek these markets to add upside potential to their portfolio, but the fundamental issue is that shipping requires patience in order to reap profits, and many market participants have a very short return on investment timeline.

Next year will bring more consolidation and more mergers. Despite the market conditions of late, Offshore owners dominate the top public owners listed on the Singaporean Exchanges.

Comparing current VV fleet values to those of April 2018, we can see decreases as a result of top owners shedding tonnage. Offshore is clearly still a major industry on the exchanges, taking top spots on the US, Norwegian and Singaporean exchanges, and it is worth noting that many market players believe the worst of the conditions have passed putting us now on an upward trajectory. Even though the oil price has rallied of late and showed some positive signs during 2018, the Offshore market will need to take more steps towards consolidation and reform in order for a recovery to take place. It will be interesting to see if some of these companies merge over the coming year.
Source: VesselsValue

Previous: Chinese Purchases Of US Soya Beans Bounce Back In January
Next: Capesize Market in the Doldrums: Cyclones and Dam Collapses Plague Dry Bulk Rates for Larger Ships