LNG Bunker Fuels Are Only Transitionary: Will Hydrogen Take Over in the Long Run?

LNG bunker fuels are gaining traction as a way to reduce emissions “right here and right now” among many members of the shipping community. However, it’s only ever going to be a bridging fuel. In its latest weekly report, Gibson said that “the world is changing rapidly around us. One thing that has significantly changed over the last two years is that the environment is much more at the forefront of people’s conscience. The recent price spikes in oil and gas prices have also meant that alternative sources of fuel are now much more visible than they were. Discussions on methanol, ammonia and hydrogen are now firmly established. All it has taken is a pandemic and a massive price spike to really get people thinking about future fuels. As a result, engine manufacturers are busy developing the necessary propulsion systems to enable these new fuels to be utilized as bunkers. Some vessel owners and charterers are keen to try new propulsion designs to reduce their overall impact on the environment, as well as reduce their future exposure when EEXI and CII are implemented. These new designed not only include alternative fuels, but utilise hybrid systems with the main propulsion systems and battery packs used in parallel. In addition, fuel cells are also increasingly being investigated; these could use a variety of alternative fuels, although to harness the required power to move a VLCC is still way off in the future”. 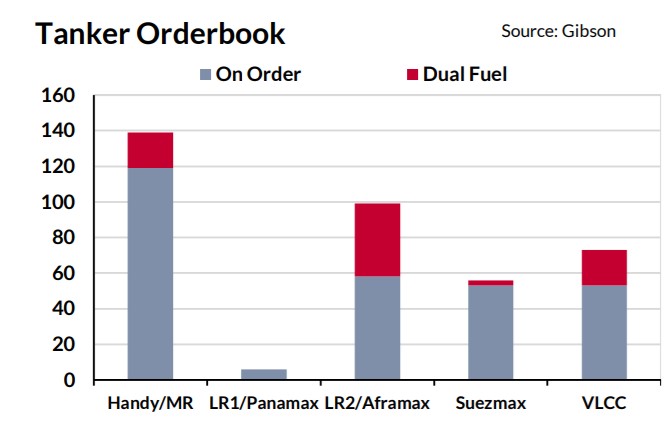 According to Gibson, “LNG has long been the fuel of the future, with LNG carriers utilizing their cargoes for bunkers for decades, resulting in mature market knowledge of how to utilise the super cooled gas as a fuel. Gibson’s alternative fuel ship database highlights over 530 LNG and other fuelled vessels currently on order, ranging from tugs to Capesize bulkers. Of these vessels 20 are VLCCs. Recent news that the newbuilding LNG-fuelled VLCC Yuan Rui Yang (319 k dwt) has completed sea trails and has been bunkered with LNG highlights that LNG is coming to the largest sector of the tanker market. The vessel was ordered in 2017 and constructed at the Dalian Shipyard in China and has XDF propulsion system. It has two 3,500cbm Type C storage tanks and will consume around 60 tonnes per day in gas mode. This new tanker will join several Aframax tankers that are dualfuel tankers. There are two LNG fuelled Suezmax tankers on order and 41 Aframax/LR2s. There are also around 40 LNG-ready tankers under construction, meaning as and when the market, charterer or owner decide to make the vessel fully LNG capable, the vessel can have the required machinery and equipment fitted. Overall, the current LNG-fuelled tanker newbuildings stands at 23% of the current total tanker orderbook. So, it would seem that there is still some way to go before LNG fuelled tankers become the dominant vessel type, but as a bunker fuel it is certainly being taken seriously”. 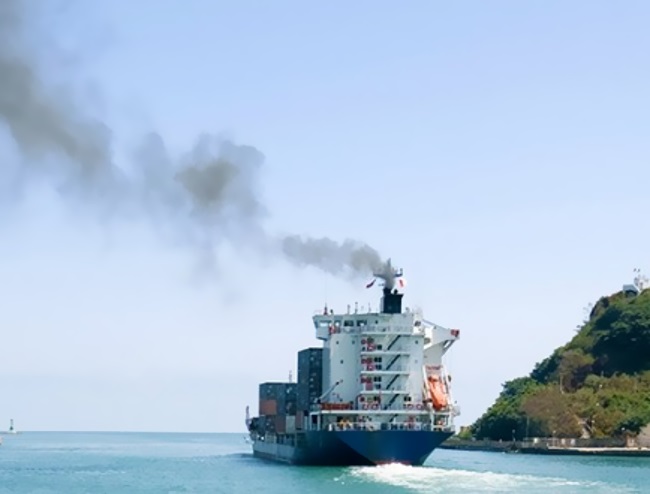 “However, LNG has only ever been seen as a bridging fuel, with no-one fully sure which way the market will lean in the future. Will it be a single fuel future? or will there be an array of fuels for different vessel types, depending on their cargo and trading patterns? One part of this future story has started to take shape. The Suiso Frontier, a purpose built liquid hydrogen carrier (LHC) is about to embark on its first voyage to load a cargo of hydrogen in Australia. The vessel has the ability to reliquefy the cargo back into the cargo hold. Although this vessel hasn’t been designed to use hydrogen boil-off in its engines, it is anticipated that subsequent vessels will be able to use their cargo as bunkers. So, it seems that in the medium-term there could be some interesting developments within the tanker propulsion sector”, Gibson concluded.
Nikos Roussanoglou, Hellenic Shipping News Worldwide