The ability to provide carbon-neutral LNG cargoes could become an essential part of LNG trade by the 2030s, traders have said.

Sources at three European gas providers told ICIS they plan to test-buy carbon-neutral LNG cargoes in the coming year and several more said they are looking at the possibility.

More cargoes could come from the US, a significant change of outlook considering how France’s ENGIE pulled out of a contract deal with NextDecade last year. The French government, a major shareholder in ENGIE, had expressed concerns about methane emissions in centres of US gas production.

“I think you will start to see more [carbon-neutral cargoes] in the LNG marketplace,” said Sempra LNG CEO Justin Christopher Bird at the US company’s latest corporate presentation when asked about the Shell-Cheniere deal.

Offsetting is not the only road to lowering global emissions.

The International Energy Agency has suggested most emissions in gas and LNG supply chains could be avoided with tighter regulation on venting as well as systems to control fugitive emissions.

New projects like Shell’s LNG Canada and the Qatari expansion are being planned with carbon-capture storage facilities and promises of tighter methane slip tracking and controls.

Sempra also wants to boost its use of biogas to cut emissions to reach 20% renewable gas by 2030, from around 5% now.

“What’s interesting is you get carbon-offset credits if you can use renewable natural gas for marine purposes as well as for transportation purposes,” added Sempra Energy chairman, president and CEO Jeffrey Walker Martin. He said European companies are actively asking about timelines for buying LNG with renewable content.

But they are also researching what approach to take when it comes to tackling their emissions trail, and confusion abounds. 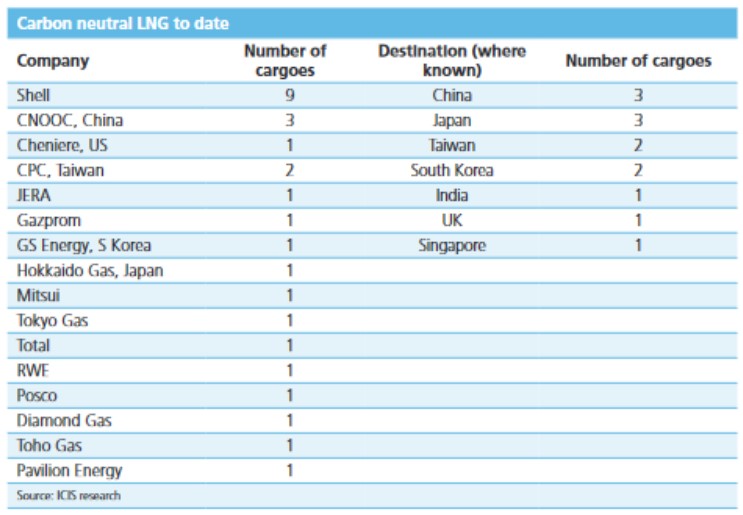 “This is a topic that I’m looking at, but I have more questions than answers,” is how one research analyst responded. Several shipping and trading sources echoed his feelings.

How will carbon offsetting affect LNG prices? How will LNG prices differ between regions, energy and emissions intensity in future years? How will these factors change trading margins if prices become more volatile?

Sources involved in recent carbon-neutral LNG cargo deals said that, while the market may never become the main focus of trade, its role will grow quickly this decade, and will help define how LNG markets work.

Prices could be tiered according to emissions intensity, with carbon-neutral offsets one aspect of this.

“A bit like how different qualities and origins of crude have quite different prices,” said one source.

Traders might see more differentiation in LNG prices from cargo to cargo, but European gas utilities are also seeing the impact of carbon in pipeline prices, said another.

They added that global energy companies are likely to have or to increasingly employ carbon market specialists, and that traders may find new ways to hedge LNG using this new link.

Some are inevitably questioning LNG’s future overall, however.

“Shell has gone the furthest in saying that, yes, we see growth to 2040 but because we are uncertain in what happens thereafter, especially if you believe in a Paris-compliant world, we don’t want to pursue projects that don’t have a payback before 2040,” said head of European energy equity research at Credit Suisse Thomas Yoichi Adolff.

He added that work from Shell to significantly reduce emissions could mean LNG markets remain healthy beyond this.

“If you believe that renewables is going to grab a bigger share of the power mix [globally] then I believe LNG is going to become even more important.

“Renewables are quite intermittent, and you are just not going to have the economics from battery to deal with this any time soon, which means you need a flexible source of supply to compliment renewables and LNG does exactly that” he added. 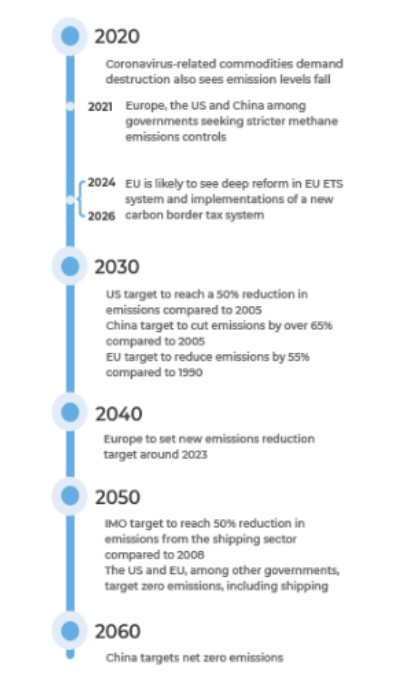 SHELL AS A MODEL

Shell is working to integrate its nature-based solutions model into LNG markets beyond its own LNG production portfolio. Its role in defining how LNG markets may develop in future cannot be ignored.

Statements from the company’s executives indicate this strategy is not just about mitigating risk for Shell, but for LNG markets as a whole so that LNG can be a viable source of energy in future decades.

Shell plans to capture around 30m tonnes/year of carbon by 2035, according to executives speaking in 2020.

By rough estimates, this might represent about half of carbon emissions from the US LNG market each year by the 2030s.

The National Resources Defence Council has said US LNG exports between 2020-2030 will generate between 130-213m tonnes of new greenhouse gas emissions.

Numbers are based on both current and future assumptions on leakage.

“We based our report on research that estimated the real-world life-cycle emissions of LNG exports,” said Amanda Levin, one of the authors of Sailing to Nowhere, which published the data.

“This range does reflect various assumptions about leakage rates, for example, based on assumptions that the researchers made. If the industry believes it can reduce emissions, it should do so and demonstrate those reductions.”

Of course, the portfolio could be used in other fossil-fuel sectors.

Extrapolating how much carbon-neutral LNG cargo markets will grow by then is inexact, to say the least.

But the carbon-neutral LNG market is likely to grow to over 10 times its current size by 2035, according to one analyst source looking at Shell deals so far.

The EU is also monitoring how nature-based solutions are managed and what impact they have.

It identified data reliability as one challenge, and the need for additional resources like staff and supervisors when companies in different market segments look to find nature-based solutions to their offsets, such as urban housing and traffic.

Another issue was the reliability of data in some areas, with accurate analysis of soil and forest carbon capture needing laboratory analysis in some cases.

Shell says it is taking an approach where it will seek to improve monitoring of carbon capture as well as emissions, and that it has options for offset certificates from several providers.

Companies like Malaysia’s PETRONAS are also investing in nature-based portfolios, although not necessarily managing these.

Singapore’s Pavilion is building a “natural climate solutions” portfolio, with traders saying it could make sense for larger companies straddling multiple emissions-intensive sectors to develop their own resources.

Carbon’s importance in gas and LNG markets will only grow. The structures behind carbon-neutral cargoes are just one tier of differentiation and may help gas market participants to hedge for what is to come.
Source: ICIS, By Clare Pennington (https://www.icis.com/explore/resources/news/2021/05/07/10636084/glm-focus-lng-carbon-neutral-growth-is-coming)