LNG Shipping: Demand is About to Drive Rates Even Higher in 2019

The market fundamentals for the LNG shipping industry are steadily improving as we head for another landmark year. In a recent report, shipbroker Banchero Costa detailed the demand side of the market, by noting that “over the last 10 years the LNG trade grew an average 5% y-o-y. The rate of growth however was quite irregular: strong until 2011, substantially flat in the following 4 years (averaging +0.5%) and from 2016 rising again. If in 2016 and 2017 the LNG trade increased by +7.5% and +9.9% respectively, in 2018 is expected to reach almost 320 mln tonnes which would record a +10% growth. Such an irregular development is mostly due to the complexity of liquefying the natural gas before loading it on ships and the regasification process to make LNG available for consumption. Rather than consumption, the real bottlenecks so far are at the beginning and at the end of the voyage by sea. In particular the major constrain of the last 10 years was that liquefaction capacity was unable to produce enough LNG for exports. With new liquefaction capacity entering in service the trade is now flourishing again”. 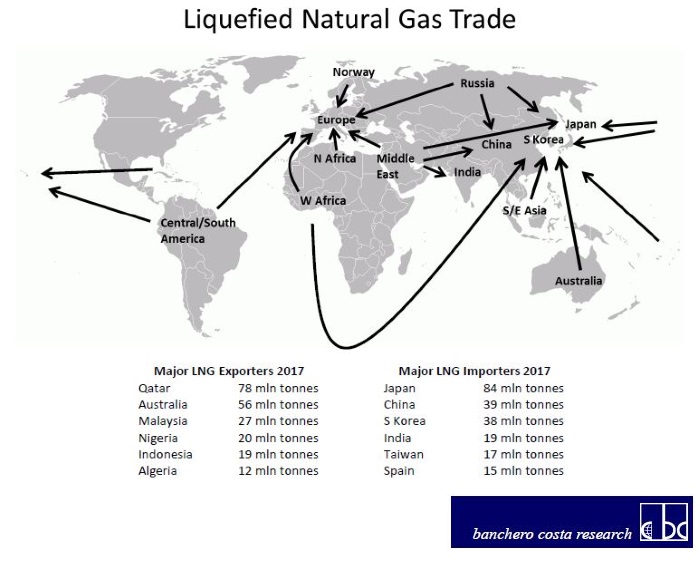 According to Banchero Costa, “on the supply side, in 2017 the two largest exporters were Qatar and Australia, together accounting for almost half of the total volumes exported worldwide. With new projects coming on stream, Australia’s exports increased 24% to reach 55.6 mln tonnes in the same year; in absolute terms that is the strongest growth, but a huge boost the trades was also coming from U.S. (whose exports were virtually zero in 2015), competing with established exporters like Algeria and Indonesia. In 2017, Qatar continued to be the world’s larger exporter of LNG (with 78 mln tonnes supplied) and the first source of liquefaction capacity with 77 MPTA. Still in the same year, Qatar announced the plan to increase liquefaction capacity to 100 MTPA by the mid-2020s. LNG global supply is set to rise thanks to the additional capacity coming from U.S. followed by Australia and Russia. U.S. is expected to hold half of the new global supply capacity in the next few years. In the first half of 2018, according to the U.S. Energy International Administration (EIA), U.S. LNG exports increased by 58% compared with the same period in 2017. If in 2017 all exports were sourced by Louisiana’s Sabine Pass liquefaction terminal, on 1 Mar 2018 Cove Point LNG exported its first LNG cargo and other projects are expected to be completed and go online by 2019: Elba Island LNG in Georgia and Cameron LNG in Louisiana by the end of 2018, then Freeport LNG and Corpus Christi LNG in Texas in 2019″. 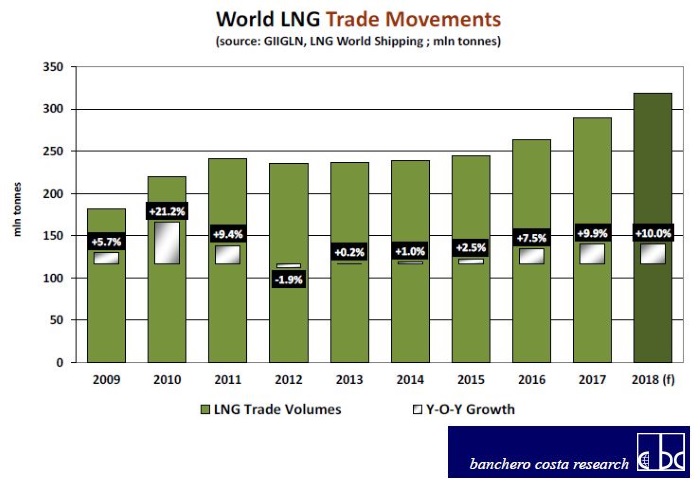 The shipbroker added that “further developments of U.S. export capacity are expected to provide a huge boost to tonne mile demand, with EIA expecting the country to be the world’s third largest LNG exporter by 2020 behind Australia and Qatar and surpassing Malaysia. In 2018, strong Australian exports are expected to continue thanks to the ramp up of Wheatstone LNG and the completion of the Prelude Floating LNG and Ichthys LNG projects. According to Australia’s Department of Industry, Innovation and Science, the combined nameplate capacity of Australia’s LNG projects will reach 88 mln tonnes and could help Australia overtake Qatar as the world’s largest LNG exporter in 2019″.

Banchero Costa said that “other large export facilities under development include the Yamal LNG project located in Russia’s Far North. With an annual capacity of 16.5 mln tonnes, the project is expected to boost Russian LNG exports. Yamal’s first LNG cargo was delivered to China in July 2018 via the Northern Sea route through the Arctic, inaugurating a new LNG shipping route that reduces drastically delivery time and costs compared to the conventional route via Suez Canal”. 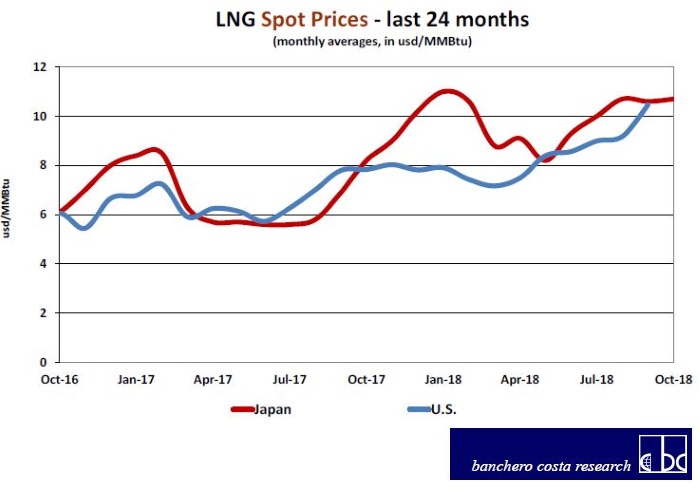 Meanwhile, “Asian countries are expected to continue to drive the LNG global demand. Their imports have more than doubled over the last decade, with the region representing in 2017 over 70% of global imports. During the same year, China was leading by far in terms of incremental LNG imports, rising by 11.6 mln tonnes (42.3%) over 2016 and surpassing South Korea as the world’s second largest importing country. Surging demand for LNG imports has been driven by cold weather, coal-to-gas switching policy directives to curb air pollution and the large scale replacement of coal-fired heating with gas-fired boilers in residential households. The overall increase in natural gas usage is in line with China’s 13th five-year plan, which targets to increase gas’ share in the energy mix to 10%, compared to 5.9% in 2015. Chinese LNG imports were mainly sourced from Australia, Qatar, Malaysia, and the U.S.. However, the future of U.S. supplies to China remains uncertain amid the ongoing trade war between the two countries, particularly after the 10% tariff that China imposed on imports of LNG from the States starting from September 2018″. 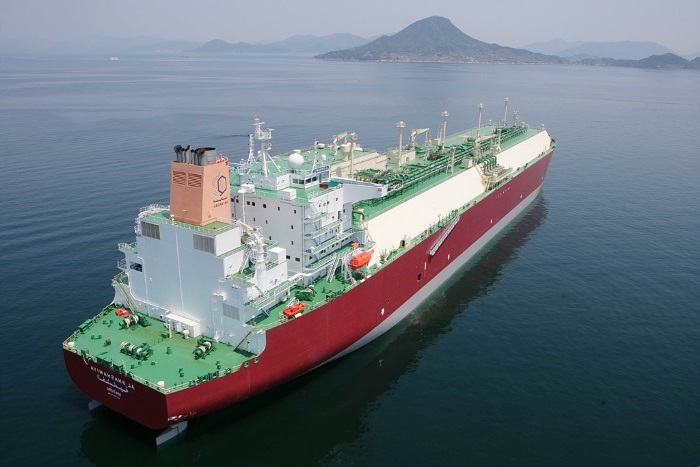 “Japan was the world’s largest LNG importer in 2017, accounting for 28% of global imports. However, Japan’s LNG imports are expected to slow, passing from 84 mln tonnes in 2017 to 81 mln tonnes projected in 2020. In the first 10 months of 2018, Japanese LNG imports were almost the same of 2017 (namely at 69.3 mln tonnes), mainly due to the restart of some nuclear power plants. Up to October 2018, a total of a total of 9 out of 42 nuclear reactors had recommenced operations; the return of more reactors is expected to compete with gas consumption, although the timing and scale of nuclear restarts remains uncertain”, said Banchero Costa. 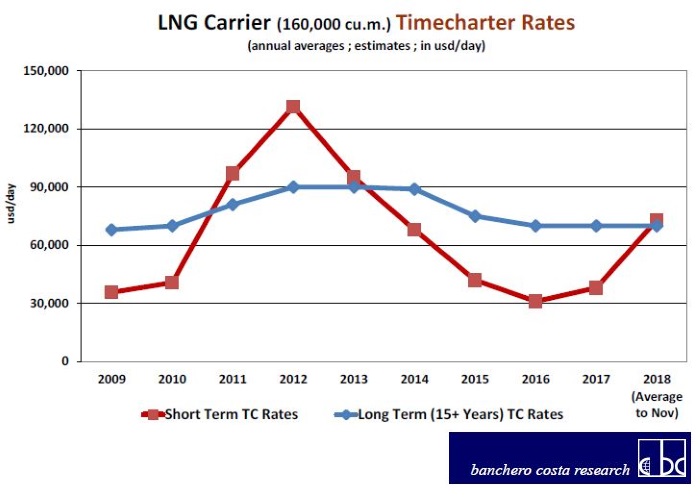 “South Korea has historically been the second largest LNG importing country. However, even though South Korean imports increased a strong 13.1% to 37.8 mln tonnes in 2017, they were overtaken for the first time by China as the latter’s imports reached 39 mln tonnes. In December 2017, South Korea’s energy Ministry released their long-term Basic Blueprint for Power Supply, detailing that LNG’s share in electricity production would climb to 18.8% in 2030, up from 16.9% in 2017. In July 2018, South Korea’s finance Ministry has announced a plan to increase its tax on thermal coal imports, while lowering the tax on LNG imports on cargoes shipped from April 2019. This is expected to support steady growth in the country’s LNG demand, which is now forecast to reach 40.5 mln tonnes in 2031, up from an estimated 36.5 mln tonnes in 2018. Coal’s share in the power mix is expected to fall to 36.1% in 2030, down from 45.3 % in 2017, while nuclear share will decline to 23.9 % compared to 30.3 % in 2017”, the shipbroker added. 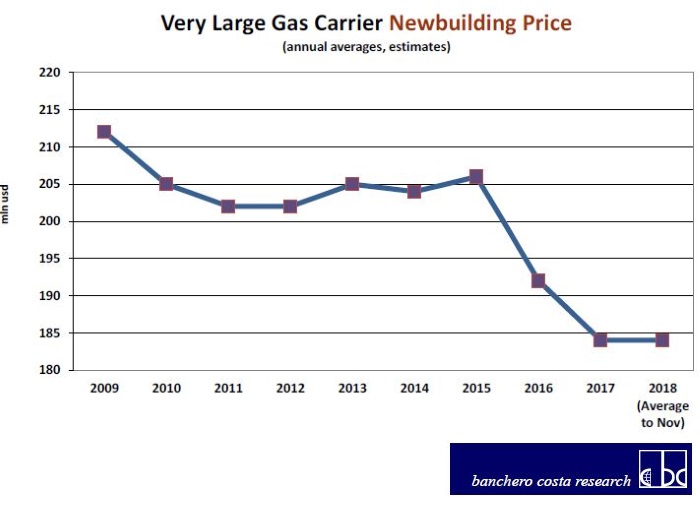 Concluding its analysis, Banchero Costa said that “global demand is set to be driven also by other Asian emerging countries, including India, Pakistan, Bangladesh, Indonesia, Thailand and Singapore along with Taiwan, where the growing demand of LNG is boosted by Country’s aim to reduce coal and nuclear power energy share by 2025. Europe represents as well another source of growing demand of LNG, thanks to its increased use in power generation and to a lower hydropower generation across several regional. Even if Europe’s share of global LNG imports has been falling from 29.4% in 2010 to 16% in 2017 (mainly due to a decline in gas demand and competition from pipeline imports), according to GIIGNL, Europe’s LNG imports increased by 19.5% to 46.0 mln tonnes in 2017. European LNG imports could see still a pick up as the region seeks to replace rapidly declining domestic output”.
Nikos Roussanoglou, Hellenic Shipping News Worldwide