In 2017, spot LNG import reached approximately 20% of the total volumes delivered, representing about 59 MT of LNG. ​

Aided by LNG contracts with destination flexibility, due to increased contracts for portfolio trade and by the growing volumes handled by traders, Asia received about 60% of spot LNG (35.4 MT), followed by Europe (9.0 MT), the Americas (8.6 MT) and the Middle East (5.5 MT). So when you look at both “Spot & Non-long Term” cargoes in 2017, the combined tonnage reached 88 MT.

China and South Korea were the main drivers of growth in spot imports as they imported 21% and 22% of their LNG supplies on a spot basis in 2017.

The continual rise of spot and short-term volume when combined accounted for 27% of total trade. It was bolstered by the emerging US exports throughout 2017, which accounted for 10.4% of LNG volumes delivered under contracts of four years or less in 2017. ​

Echoing the 2016 trend, spot LNG prices followed a seasonal profile the previous year, with an added positive increase in November & December via a higher than expected demand out of China, and colder than normal weather patterns in northeast Asia. 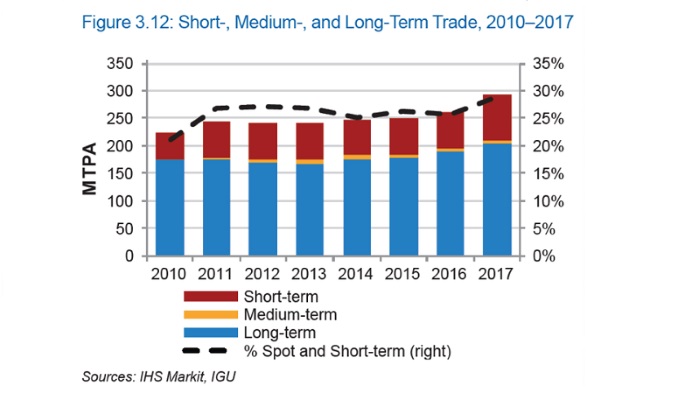 Since 2007, the LNG trade has evolved from being traditionally delivered under long-term, fixed destination contracts to a point of where we are today, with a growing number of cargoes being sold under shorter contracts or on the spot market. This new norm, also known as “non long-term”, has been born out of emergence of portfolio players and traders, as well as more destination flexibility in contracts. Ever since the Fukushima disaster, many buyers for both long and short term looked for solutions which would allow for flexibility in the purchase and supply / delivery of LNG. ​

However, spot / short term cargoes almost dried up in 2016 as new LNG supply came mostly from long-term contracted projects. However in 2017, this trend changed rapidly as the volume of LNG traded without a long-term contract increased significantly 21% YOY at the close of 2017.

The outlook indications for 2018 and beyond is that “spot / non long term” will reach 30% YOY.

This is made more evident when looking back 18 years ago to 2000, where there were only 6 spot exporters and 8 spot importers compared to 2017 where there were 29 countries exporting spot to 33 end users. ​

In addition, with the rise of FSRU’s in the markets of multiple countries, the importance of short to mid term contract supply will ensure that the new “norm” remains in play for many years to come. ​
Source: Wilhelmsen