The demolition market is at a standstill for the time being. The raging pandemic in India and holidays around the world have limited activity to a significant degree. In its latest weekly report, shipbroker Clarkson Platou Hellas said that “various holidays now being celebrated globally have ensured a quieter period this week as Golden Week (Far East), Orthodox Easter (Greece) and the midst of Ramadan have slowed activity. The recycling yards in India have now ceased cutting operations due to the pandemic as all available oxygen bottles are being diverted to the local hospitals, therefore any available unit looks destined for either Bangladesh or Pakistan where the markets remain aggressive and the recyclers keen to acquire tonnage. Whilst there is little noticeable market tonnage on the outside, it does appear more private negotiations are taking place with such sales only coming to light on arrival at their final destination. These do seem to be mainly geared towards the smaller tanker and offshore units. The positive news is that price levels do appear to be on the rise again from both Bangladesh and Pakistan, with levels now approaching the mid 500’s for handy sized tanker units”, the shipbroker noted.

In another report this week, shipbroker Banchero Costa added that “the Covid situation in India has escalated to dramatic levels. Understandably, Alang recycling yards are currently shut as supplies of oxygen are being diverted to hospitals. Sharp increases in Covid cases are also being seen in Bangladesh, Pakistan, and Turkey. That said, the Bangladesh market remains red hot in terms of pricing and several sales have been reported. 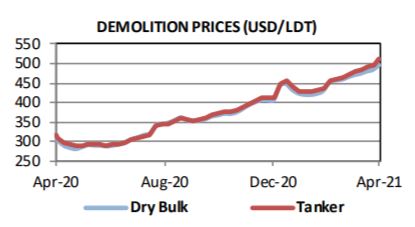 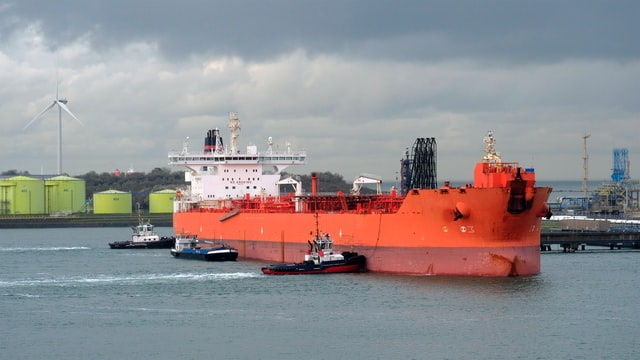 Meanwhile, in a separate note, GMS , the world’s leading cash buyer of ships said this week that “all eyes remain on the horrifying situation that is currently unfolding in India as each day brings with it record, numbers of Covid-19 cases & deaths as many hospitals across the country are running desperately low on oxygen supplies and vacant hospital beds. Over 400,000 cases are being registered every day now with well over 3,000 deaths being recorded on a daily basis – the highest of any country at any point of the pandemic. Understandably, Alang recycling yards have been shut as supplies of oxygen are being diverted elsewhere and a real push now needs to be made to ramp up vaccine efforts, with less than 2% of the population vaccinated and all adults over 18 now eligible for their first shots. Aid has been arriving this week from across the world and several states, including Delhi, are continuing their lockdowns, in an attempt to curb the fiery spread of new cases. Elections are still going ahead despite the dire crisis at hand, and many have been blaming the government for some of the mass rallies seen prior to this most recent spike”.

GMS  added that “neighboring Pakistan and Bangladesh have also been seeing sharp increases of Covid cases, and crews for ‘as is’ sales from these countries are now being barred from many global ports, making ‘as is’ deliveries an increasingly tricky affair at present. Finally, Turkey too has announced their own lockdown until May 17th (until the end of Ramzan holidays) as the local Government attempts to curb their own spread, with over 38K fresh cases being reported every day”, GMS concluded.
Nikos Roussanoglou, Hellenic Shipping News Worldwide