Fears that the UK’s decision to leave the European Union would dent the reputation of the nation’s capital as the leader in maritime arbitration cases have not been realised, according to research by shipping law firm HFW.

Its research – now in its third year and led by the firm’s Craig Neame and Holly Colaço – found that London’s international maritime arbitration caseload of 1,730 in 2019 marked an increase of almost 14%, compared with 2018. The London Maritime Arbitrators Association (LMAA) handled the lion’s share at approximately 1,668 new cases (up from 1,483 in 2018), with the London Court of International Arbitration and The International Chamber of Commerce (ICC) making up the difference.

But London’s position as the maritime arbitrator of choice in the past is not a guarantee of future success. HFW’s research over the last three years has “consistently indicated” that Singapore and Hong Kong are London’s strongest competitors in the global dispute resolution market, says the firm. 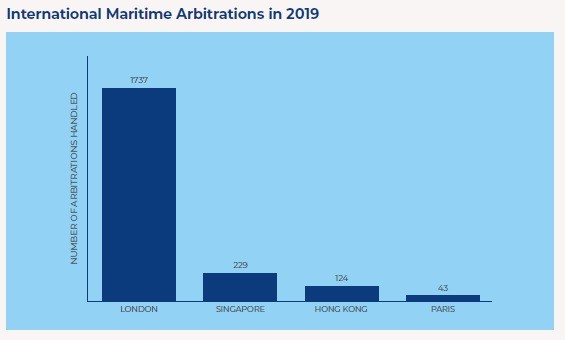 Meanwhile, HFW describes Paris, with its long-standing reputation in Europe for maritime dispute resolution, as a “forum worthy of note as a regional maritime centre”. Paris’ two arbitral institutions – the ICC and the Chambre Arbitrale Maritime de Paris – hosted approximately 43 maritime arbitrations in 2019, unchanged from 2018. This represents approximately 2.5% of London’s caseload for 2019. However, HFW notes that Paris has a significant ad hoc arbitration caseload that has not been included in its figures.

The UAE – described as “with ambitions of becoming a global maritime hub to watch” – continues to build up the first dedicated maritime arbitration centre in the Middle East, the Emirates Maritime Arbitration Centre. While caseload statistics are not yet available, HFW notes that it “has some way to go before it may be considered a challenger to London”. Scandinavia in is a similar position with its Nordic Offshore and Maritime Arbitration Association only established in 2017.

Looking ahead, there are challenges to London’s dominance. The UK will conclude its EU transition period at the end of 2020 and the shape of the future UK-EU relationship still needs to be decided. Then there is the Covid-19 pandemic to factor in, with companies around the world starting to feel the bite of the resulting economic recession. HFW expects disputes and the use of arbitration to increase in these challenging times, as the “flexibility, faster resolution and potentially lower costs” offered by arbitration make it an increasingly popular choice for resolving maritime disputes.

HFW also expects London to continue to enjoy a “solid reputation” for international dispute resolution and to prosper as a maritime arbitration hub in 2020 and beyond. This positive outlook reflects the fact that the LMAA (which sees 95% of its caseload in London) has reassured its members that, with approximately 80% of its London maritime arbitration cases conducted using documents only, much of its current activity is business as usual and remains unaffected by Covid-19 restrictions.

The LMAA has also been able to conduct remote hearings using video conferencing software, allowing it to adapt quickly to the new reality. “It will be this ability to adapt that could be key to arbitration institutions continuing to attract maritime dispute cases in 2020,” concludes HFW.

HFW’s research for its The Maritime Arbitration Universe In Numbers report includes statistics from over 10 leading arbitral bodies. They are best estimates produced from the figures for maritime arbitrations both published and provided to HFW upon request. They cannot completely capture all maritime arbitrations as not all institutions provide full breakdowns by jurisdiction and sector and ad hoc arbitrations are difficult to track. Different arbitration institutions also record their arbitrations slightly differently, which makes comparative analysis of figures more difficult. A comprehensive explanation of the statistics is available here.
Source: Baltic Exchange

Previous: The Quiet Before the Storm
Next: Colombo Dockyard remains confident of global shipbuilding sector aiding its growth