Long-term rates into the US West Coast were the first to experience a jump, following a long period of slightly declining rates. Between 30 September and 1 October, the long-term rates rose to USD 2,052 per FEU from USD 1,496, equivalent to a 37.2% jump. They have since fallen to USD 2,014 per FEU on 13 October. This is however still 44.1% higher than the rate on the same day last year (USD 1,398 per FEU).

Long-term rates between the Far East and the US East Coast experienced an even stronger increase than those into the West Coast, with rates increasing by USD 721 per FEU; from USD 2,412 per FEU on 30 September to USD 3,133 per FEU on 1 October. Once again, long-term rates have since declined, but at USD 3,207 per FEU, they are still 25.7% higher than on the corresponding day in 2019. 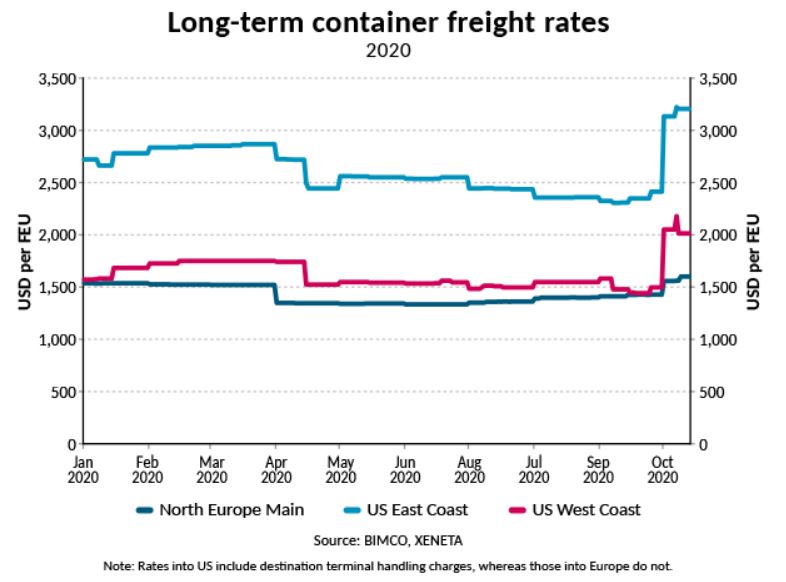 Volumes on the rise after a weak start to the year

In the first six months of the year, container volumes between the Far East and North America were down by 8.5%, or around 300,300 TEU in absolute terms. Since then, however, volumes in July and August have proven strong. Both months have recorded stronger volumes this year than the corresponding months in 2019, helping to pull the accumulated year-on-year growth rate up to -2.4%. Compared to last year, container volumes were up by 180,000 TEU and 280,000 TEU in July and August respectively.

With these strong volumes, the Far East to North America trade is outperforming the development in the rest of the world, with global container shipping demand down by 4.8% in the first eight months of the year. Here, August was the first month to see higher volumes this year compared with the same month last year (+212,000 TEU).

Following an almost 15% drop in retail sales in April as a result of lockdown measures in the US, retail sales have since proved resilient. After the first eight months of the year, retail sales are now up 0.9% compared to last year.

The robust demand for goods means that container shipping has been less affected than overall growth figures would suggest, as the industries suffering the most are less reliant on trade. Container shipping into the US has been less affected than what overall growth rates would suggest, as many of the hardest hit sectors (eg, services) are less reliant on trade, than retail sales which have proven quite resilient. Furthermore, the decline in imports in the first half of the year mean inventories need restocking and importers may be looking to frontload stock ahead of more potential disruption to supply chains from a second wave of COVID-19 cases. 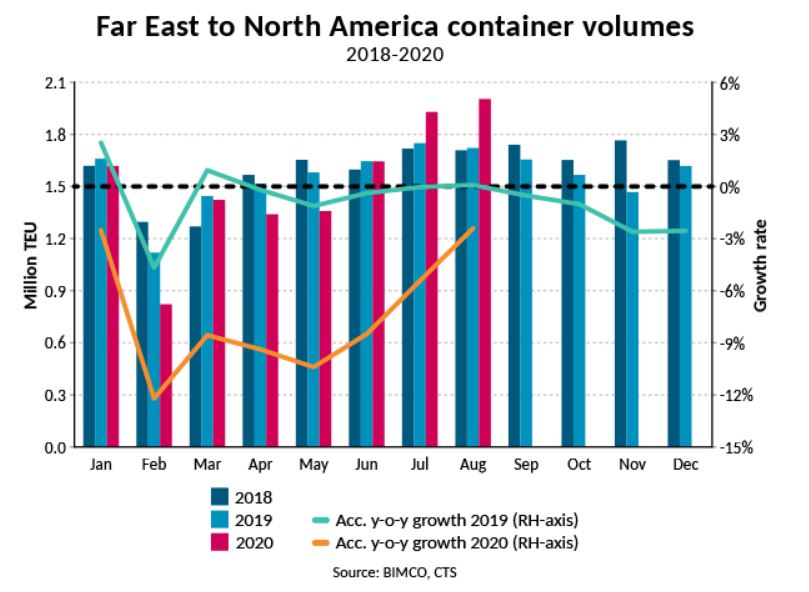 Rates to Europe see a more gradual and slow increase

Just as the rise in spot rates was lower on routes between the Far East and Europe, the same is the case for long-term rates. Unlike their US counterparts which increased by USD 721 per FEU and USD 556 per FEU, long-term rates to North Europe from Asia have seen a smaller and more gradual increase. They currently stand at USD 1,600 per FEU, USD 173 dollars higher than on 30 September.

Previous: Tata Steel may turn a corner as subsidiary’s Q2 results shows recovery on track
Next: Accelerated by disruption; shipping’s digital revolution in the pandemic era