Introduction
Every year fires on board ships lead to loss of lives and severe damage to the ships themselves. Most fires on board ships originate in the engine room where the three ingredients for a fire, namely fuel, oxygen and a source of ignition, exist in abundance. These do not only start the fire but also feed and intensify it further. Fire safety is not only about detecting and fighting a fire, but also about preventing it from igniting in the first place.

In this article we will focus on how these fires can be prevented. We will touch upon some of the main causes of engine room fires and explore insights from our claims data to understand the frequency of such fires before setting out some recommendations on how to mitigate the risks of these fires occurring.

How do most engine room fires start?
A review of Gard’s hull and machinery (H&M) claims for the years 2017-2021 related to fires and explosions on vessels, shows that nearly 60% of all such fires originated in the engine room. Nearly two thirds of these engine room fires occurred on the main and auxiliary engines or their associated components such as turbochargers. The majority of these incidents were caused by a failure in a flammable oil system, most often in the low-pressure fuel oil piping, allowing spray of oil onto an unprotected hot surface. Below is an example from our claims portfolio.

Case study
A copper pipe that was part of the fuel oil pressure gauge supply pipework for one of the auxiliary engines fractured. Due to a missing metal spray shield the fuel sprayed onto the unprotected hot surfaces of the nearby turbocharger and the exhaust system which had temperatures of more than 400 °C. The fuel ignited causing extensive damage to auxiliary engines and power distribution cables. The vessel was out of service for 40 days to carry out repair works.

Investigation by experts showed that the copper pipe that fractured did not match the original design and had a lower wall thickness. There was no record of any previous repairs carried out to the fuel system pipework. The pipe assembly on the other three auxiliary engines appeared to be of original installation comprising of a steel pipe. The spray shield was removed during maintenance and not re-installed. Insulation was also suspected to be inadequate since exposed sections around the exhaust manifold and turbocharger were noticed on other three auxiliary engines. The investigators concluded that the heat shielding arrangements on the fire damaged auxiliary engine did not meet the relevant SOLAS regulations, II-2/2.2.6.1.

In the above case, there are two main aspects which need to be highlighted.

• First is the leakage of flammable oil; and
• Second is the inadequate protection to prevent highly flammable fuel from coming in contact with a source of ignition.

Below we list some of the most commonly occurring causes of fuel spraying from low pressure piping systems. The list is by no means exhaustive, but a review of past Gard cases has shown that below listed failures occur frequently.

Piping, piping connections and other associated components, such as o-rings, were not original parts or of a type recommended by the manufacturer. In some cases, modifications had been done by the crew under existing management, whilst in others the crew were not aware of such modifications as they had been done under previous ownership or management.

• Piping connection had not been tightened to the required torque and with time it loosened due to, for example, vibrations. Another reason may be incorrect assembly after maintenance.

• Bolts for flanges or filters breaking due to fatigue caused by overtightening over a period of time. In some cases, securing bolts were also found loose or missing altogether.

• Fatigue fracture of pipes. Such pipes are typically not well supported along their entire length, which causes excessive stress due to vibrations. Lack of support may be attributed to the design or failure to reinstall the holding brackets after maintenance.

• Fuel oil filter covers coming loose and displacement of the spindle from the top cover for various reasons.

• Rupture of rubberized hoses due to degradation caused by the heat generated from nearby machinery.

Shielding can either be by insulating hot spots with thermal insulation or anti-splashing tapes, and/or by using physical barriers such as spray shields. Some typical issues with insulation which we have seen in our claims portfolio are:

• the quality may differ from yard to yard,
• it can deteriorate with age,
• it may not have been fixed back properly after maintenance, and
• it can become soaked with oil over a period of time due to minor leakages.

One of the factors which must be considered when assessing fire risks in engine rooms is the age of vessels. The risk of leakages from machinery may increase as ships grow older. We discuss this further below but highlight here some of the main issues that can increase the risk of fire in the engine room on older vessels.

• Protection of hot surfaces may degrade, with the quality of insulation may deteriorating thereby increasing the probability of ignition and risk of fires.
• Older vessels can face cuts to their maintenance and safety budgets as they near the end of their service life.
• A vessel may have changed ownership and management a number of times during its life, and this can have a direct impact on the consistency of maintenance in the engine room.

Typical hotspots in the engine room

Based on previous fire incidents handled by Gard, we have found that the below listed areas acted as a source of ignition in most cases. The temperature of these areas can easily exceed 500 °C which may be well above the oil’s auto ignition temperature.

• Exhaust manifold, pipes and associated flanges
• Exposed areas of boilers
• Turbochargers
• Indicator valves on cylinders
• Heater for purifier units
• Electrical wires/components and switchboards. Melting or smoldering of cables can also contribute to the transmission of heat

Data insights – do the numbers tell their own story?
In Gard, when analyzing trends, we, just like Cefor (The Nordic Association of Marine Insurers), follow closely the frequency trends of incidents over a given time period. This way we are also able to account for the growth in our portfolio from one year to the next. Over the five-year period, from 2017 – 2021, the frequency for the various Hull and Machinery (H&M) claims areas is showing a downward trend except for fires in engine room. This rise is largely due to fires occurring either on main engines or auxiliary engines which, as mentioned earlier, make up majority of all engine room fires. 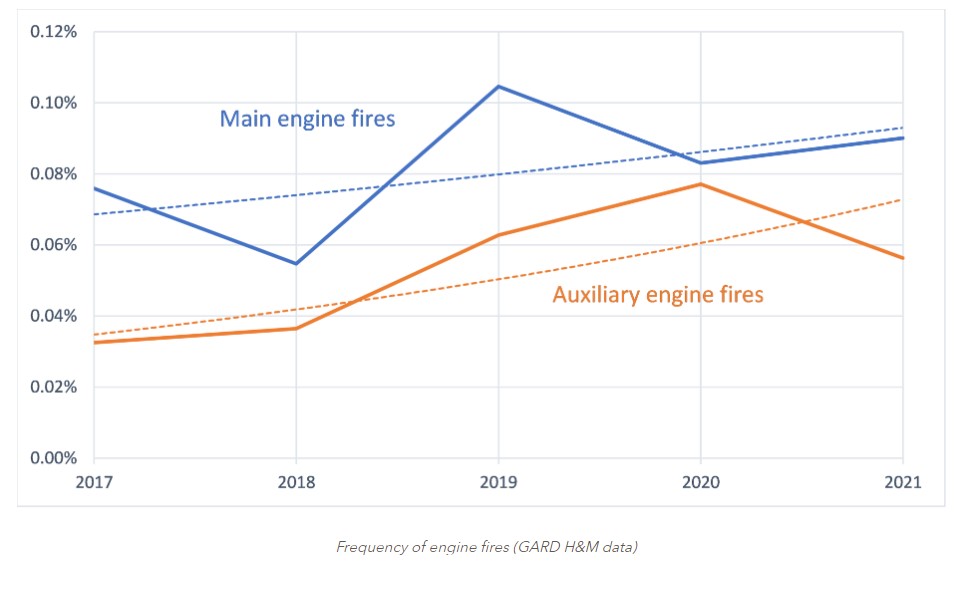 For the period 2017 – 2021, the average annual frequency of engine room fires is 0.13%, which means out of every 10,000 vessels, 13 vessels have had one such fire incident each year. This may not seem like a high number, but the consequences of such fires can be serious for human life, environment, and property causing significant business losses.

Cefor in its most recent ‘Fire Trend Analysis’ publication has made similar conclusions.

Age as a factor
We mentioned earlier that age is one of the factors to consider when assessing fire risks. Our data shows that older vessels are more prone to fires originating in engine room and frequency peaks for vessels between 25 – 30 years age. Interestingly, concentrated inspection campaigns (CIC) by Port State Control MoUs on ‘Fire Safety Systems’ carried out a few years ago concluded that the rate of detention for vessels failing certain CIC items seemed to increase as ships get older. See the Paris MoU report and Tokyo MoU report.

Recommendations
Failure in an oil system followed by deposit of oil onto a high temperature surface is the leading cause of engine room fires. We have following three key recommendations which can help owners, managers and their crew reduce the risk of such fires occurring.

Checking fuel and lube oil pipes for loose fittings, missing bolts on flanges, non-metallic hoses in areas where the temperatures can exceed the oil’s ignition point etc., from where oil can spray onto hot surfaces should be part of the vessel’s planned maintenance system. It is recommended that the assessment to identify potential sources of leakages be done on a regular basis.

Also look out for whether the components of the oil piping system are original and meet the manufacturer’s specifications. This is particularly important when taking over a secondhand ship either under management or ownership.

Owners/managers can incorporate the use of thermography onboard for detection of hot surfaces and for checking insulation during normal operations. Owners should consider including thermographic examinations in newbuilding specifications and have such tests carried out during sea trials. A thermographic examination of the engine room and the vessel’s electrical installation should be carried out periodically with engines and electrical equipment running.

Insulation: As materials used to insulate high temperature surfaces may degrade over time or become oil-soaked, regular checks should be carried out. Even if the insulation of an exhaust pipe / system appears to be in good order, there may be hidden inadequately insulated areas and smaller open hot spots which could start a fire if in contact with oil.

Spray shields: The position and condition of spray shields for both high and low pressure flammable oil lines should be checked regularly, as should the drainage arrangements for jacketed fuel oil pipes. Where spray shields are not included in the original design and the area has been identified as a potential ‘source of oil leakage’ then the installation of spray shields should be considered. Particular attention should also be given to the immediate and proper refitting of spray shields and insulation materials upon completion of maintenance.

Referring to our initial case study above, making sure that the piping met the original specs, reinstalling the spray shield after maintenance, and using thermography to identify the exposed sections in the insulation around the turbocharger and exhaust manifold of the auxiliary engine would have prevented the fire from occurring.
Source: Gard, https://www.gard.no/web/updates/content/33724878/look-out-for-fuel-leaks-and-unshielded-hot-spots-in-engine-rooms