Over the past 50 years container ships have increased in capacity by almost 1,500%, although many of the risk concerns with them are also applicable to cruise ships, car carriers and other large vessels. In many respects, such vessels are safer and the frequency of shipping losses overall has steadily declined over the past decade. However, the cost of incidents has been increasing, driven in large part by the cost of claims involving large vessels. For example, data from the Nordic Association of Marine Insurers (Cefor) has previously shown that the most costly 1% of all claims account for at least 30% of the value of total claims in any given year [1].

Larger vessels mean far greater accumulations of risks and therefore larger values and exposures, both on board vessels and in ports. Dealing with incidents involving large ships, such as fires, groundings and collisions, are also becoming more complex and expensive. Ultra large container ships (ULCS) are of particular concern following a number of fire and explosion incidents, but also groundings and collisions. Such vessels, the largest of which can carry 20,000+ teu (20-foot equivalent unit) containers, require ports with appropriate specialist infrastructure to unload cargo or carry out repairs.

“Insurers such as AGCS have been warning for years that the increasing size of vessels is leading to a higher accumulation of risk,” explains Captain Rahul Khanna, Global Head of Marine Risk Consulting at AGCS. “These fears are now being realized, as demonstrated by the growing number, and cost, of incidents with ULCS. While we have seen total losses reduce over the past decade, the benefits are being largely offset by the increased cost of losses for large vessels. The cost of casualties or incidents is rising, with an increase in severity, and this is down to the increasing size of vessels. Such ships generate economies of scale for ship owners but also increased risk, and a disproportionately greater cost when things go wrong.”

Fires on board large container vessels are now a regular occurrence – there were two in January 2019 alone, following a number of other incidents – and continue to be a major concern. In addition, the car carrier Sincerity Ace caught fire in the North Pacific on December 31, 2018, the latest large vessel of this type to do so, while Ro-ro cargo ship, the Grande America sank on March 12, 2019 after its cargo of vehicles and containers caught fire. On average, insurers see around two major losses involving car carriers each year.

Such incidents can easily result in large claims in the hundreds of millions of dollars, if not more. A hypothetical worse-case loss scenario involving the collision and grounding of two large container vessels, or a container vessel and a cruise ship, could result in a $4bn loss when the costs of salvage, wreck removal and environmental claims are included, according to AGCS. Potentially, one insurer could find they have insured more than one vessel involved in the same incident, with exposure to hull, machinery breakdown and cargo losses.

“The size of a vessel can significantly increase salvage and general average costs. ULCS require specialist tugs and finding a port of refuge with capacity to handle such a large ship can be difficult, which increases the salvage operation costs,” explains Régis Broudin, Global Head of Marine Claims at AGCS. “For example, in the case of the Maersk Honam container ship which caught fire at sea in March 2018, salvage and general average represented close to 60% of the cargo value. A high contribution has also been requested for the Yantian Express, container vessel which suffered a fire on board in January 2019.”

How a $4bn loss scenario could occur

The increasing size of vessels has raised fears about the potential for higher losses if a major casualty does occur, particularly one involving two large vessels, such as a cruise ship and a container ship, for example. There are many factors to consider when evaluating the potential costs from such an incident. On the right, we consider a worst case scenario casualty involving a collision, followed by grounding of both vessels and pollution, in an environmentally-sensitive location. In this scenario both vessels are then deemed constructive total losses. The potential exposure could be:

Following a number of incidents in recent years, the shipping industry should question whether it is running acceptable levels of risk for large vessels, according to Captain Andrew Kinsey, Senior Marine Risk Consultant at AGCS. “There is a push for efficiency and scale in the shipping industry but this should not be allowed to give rise to unacceptable levels of risk,” says Kinsey. “We continue to see the normalization of risk in the shipping industry. There have been welcome technical advances in shipping but we do not yet see a commensurate safer environment. There is now much talk of automation and autonomous vessels and how this will be safer. But in truth, innovation will be driven by the bottom line.” 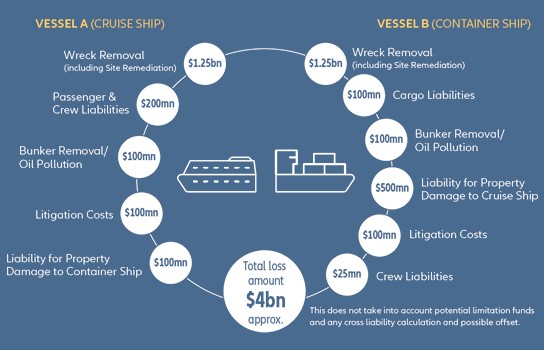 “It is very clear that in some shipping segments, loss prevention measures have not kept pace with the upscaling of vessels,” says Chris Turberville, Head of Marine Hull & Liabilities, UK, AGCS. “This is something that needs to be addressed from the design stage onwards.”
[1] International Union of Marine Insurance, Global Premiums Up By 2% But Challenges Remain For Marine Underwriting, says IUMI, September 2018
Source: Allianz