LPG shipping was once considered a niche segment for the industry, but over the course of the past 10-15 years, solid returns have lured a number of players. In a recent analysis, Epic Gas, one of the ship owners who invested in the segment noted that “the global LPG market has continued to gather pace through the quarter. Whilst oil price uncertainty, trade tensions and sanctions have affected trade flows on some longer haul routes, the underlying availability of and demand for LPG – especially US supply – and demand growth in Asia, remain key drivers of seaborne trade”.

Epic Gas noted that “the outlook for global seaborne LPG volumes is positive, with Drewry’s latest research forecasting an increase to 103.5 million tonnes in 2019, 4.3% higher than the 99.3 million tonnes achieved in 2018, and a further 4.7% year-on-year increase to 108.4 million tonnes in 2020. Facts Global Energy (FGE) forecasts global LPG seaborne volumes will reach 124 million tonnes by 2025 and estimates that 64% of this volume will come from the West and be absorbed in the East. Data from IHS Markit show USA’s total seaborne LPG exports reached approximately 11.3 million tonnes in the third quarter, a 17% year on year gain, as fractionation and export capacity continue to increase. Further expansion is expected over Q4 2019 and through 2020. FGE estimates that up to 2025, China’s LPG imports will rise by about 2.5% per annum, whilst India’s and South Korea’s LPG imports are also expected to rise by approximately 8% and 5% CAGR”. 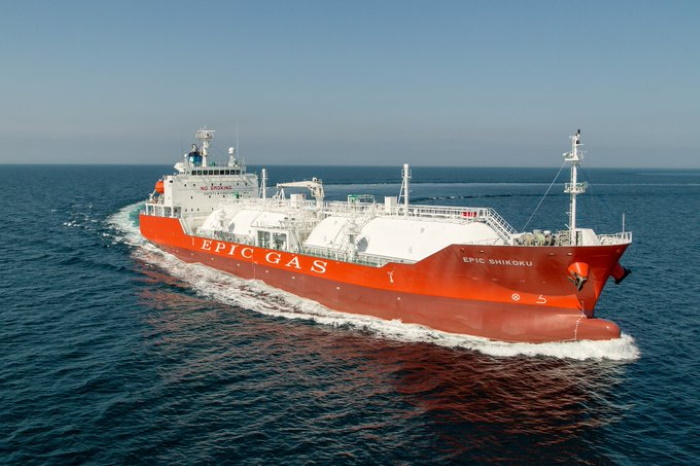 The shipowner added that “the LPG shipping market remained balanced for most of the quarter with freight levels for the largersized pressurised gas carriers making modest gains. Downtime in refineries in Europe towards the end of the quarter, which saw higher offline capacity than a year ago, resulted in lower activity levels and lower freight levels as shipping length built-up in the smaller sizes. FGE has explained that the nature of maintenance on secondary units within the refineries suggests that the spike in offline capacity during the quarter was probably linked to IMO 2020-compliant fuel preparations. It is expected that as refineries’ maintenance programmes are completed in the fourth quarter shipping length will gradually shorten”.

According to Epic Gas’ report, “the last quarter is seasonally a busier period as winter demand increases market activity. Ship owners continue with their preparations for compliance with the new IMO Fuel Emissions which come into effect on 1st January 2020. The outlook for fleet growth remains positive, with a low orderbook leading to expectations for a stronger market. There is a total of 331 pressure vessels over 3,000cbm (non-Chinese flagged) on the water, with one 5,000cbm newbuild that delivered and a 30-year old 3,300cbm vessel that was scrapped during the quarter. Subsequently, a 5,000cbm newbuild pressure vessel delivered in the month of October. The international pressure vessel fleet order book has two more newbuilds scheduled to be delivered over the balance of 2019, eight in 2020, and seven in 2021, a total of 88,500cbm. This represents a 5% increase in the existing 1.73 million cbm fleet capacity within the next three years compared to a 11% increase in fleet capacity of the larger sized gas ships. If we consider the existing older tonnage, there are 20 ships totalling 71,860cbm that are aged 28 years and older, 4.2% of existing fleet capacity, which are potential scrapping candidates. The smaller-sized semi-ref fleet that can compete with the pressure vessels has a total order book of five vessels to be delivered in 2019 and 2020. Two of them are more expensive ethylene vessels purpose built for that trade. This total newbuild capacity of 40,300cbm equates to a 2.8% increase in existing semi-ref fleet capacity. There are 11 non-ethylene vessels and four ethylene vessels that are 28 years and older, equivalent to 14% and 2% of respective existing fleet capacity. We expect that higher operating costs for the older units and probable capital investments required by new legislation, such as Ballast Water Treatment Systems and IMO 2020, will compel owners to strongly consider scrapping these older ships”, the shipowner concluded.
Nikos Roussanoglou, Hellenic Shipping News Worldwide

Previous: BIMCO: 0.0%, no change in US imports of steel goods from Brazil despite quota
Next: Tanker Market Rates 07/12/2019