Over the course of the past few years, many ship owners have invested in the once niche shipping market of LPG carrying vessels. For many of them, this move turned out to be quite lucrative, as demand rose and supply was kept relatively stable. Nowadays, USA LPG exports is becoming a major one. In a recent report, shipbroker Banchero Costa said that “as crude oil and natural gas processing increased with the U.S. shale revolution, the Unites States have rapidly emerged as the world’s largest producer and exporter of liquefied petroleum gas. Having turned into a net exporter of LPG as recently as 2011, the USA now account for 28 percent of all LPG exports by volume. During the whole of 2018, the USA exported 40.7 mln tonnes of LPG, based on Refinitiv vessel tracking data. This put them well ahead of the UAE with 14.7 mln tonnes, Qatar with 12.6 mln tonnes, Saudi Arabia with 12.0 mln tonnes, Algeria with 7.1 mln tonnes, Norway with 6.5 mln tonnes. The main export terminals in the USA are Houston (24.0 mln tonnes in 2018), Freeport (5.6 mln tonnes in 2018), Beaumont (5.5 mln tonnes), Philadelphia (2.2 mln tonnes), Corpus Christi (1.4 mln tonnes)”. 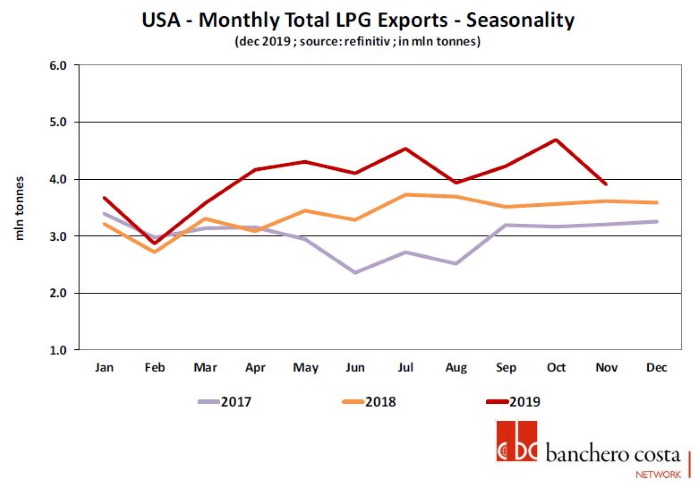 According to Banchero Costa, “the positive trend continues also this year. In the first 11 months of 2019, based on Refinitiv data, the US exported 43.9 mln tonnes of LPG (excluding petrochemicals). This was an increase of +18.3 percent year-on-year, or 6.8 mln tonnes more than in the same timeline last year. Things have really accelerated in the second quarter. American monthly exports of LPG built up from 2.9 mln tonnes in February to a record 4.5 mln tonnes in July. Whilst 1Q2019 saw just a +9.5% increase year-on-year, with 10.1 mln tonnes, 2Q2019 recorded a +28 percent jump year on year, with 12.6 mln tonnes. The third quarter again saw 12.7 mln tonnes, up +16.0 percent year-on-year. LPG production and exports from the US are driving shifts to the global trade patterns – incremental US exports have moved to Asia. When the trade war between the US and China escalated last year, the flows of trade has also shifted as a consequence. In the first 11 months of 2019, the USA exported just 0.2 mln tonnes of LPG to China. This was down -67.5 percent year-on-year from 2018, i.e. 1 mln tonnes less than in the same span last year. More notably, it was an – 83.4 percent contraction from the same period of 2017”. 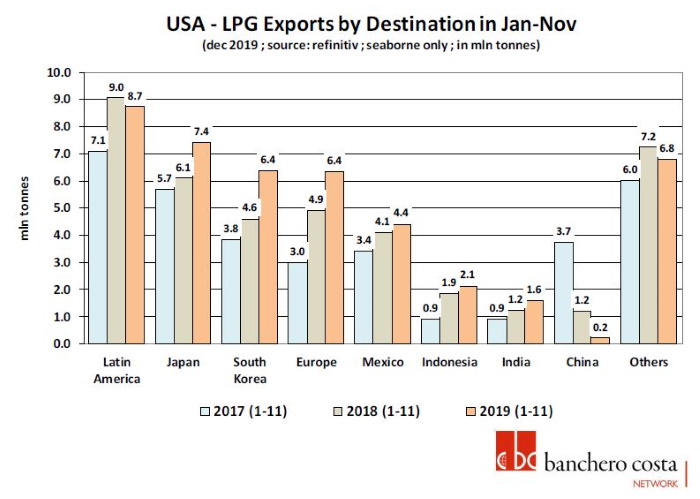 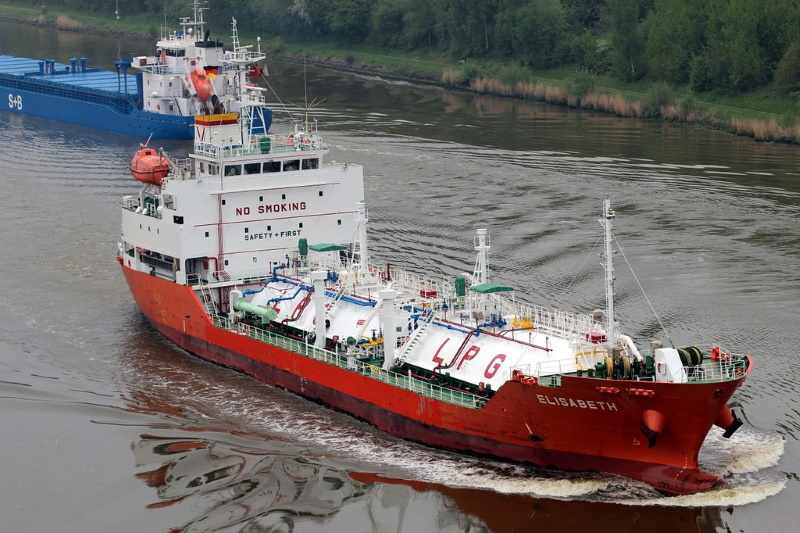 The shipbroker added that “there have hardly been any shipments between the USA and China since the beginning of September last year. On the other hand, the U.S. have boosted further their LPG exports to Japan and South Korea via the Panama Canal, as well as across the Atlantic to Europe. Japan is the top importer of U.S. LPG with 7.4 mln tonnes in Jan-Nov 2019, showing an increase of +21.7 percent yearon-year, or 1.3 mln tonnes. Japan was the destination of 17 percent of U.S. LPG shipments. At the same time, 6.4 mln tonnes of LPG were exported from the USA to South Korea, a jump of +14.5 percent yearon-year, as autogas consumption in South Korea increases, accounting for 15 percent of U.S. shipments this year. Exports to Europe have surged by +29.4% this year to 6.4 mln tonnes – Europe now receives 15% of U.S. LPG exports. Mexico has been a key destination for the LPG exports from the US Gulf for many years, and among Latin American nations it is the single largest customer. Mexico imported 4.4 mln tonnes of LPG from the USA in Jan-Nov 2019, an increase of 7.7 percent in the same period last year. Mexico now accounts for 10 percent of volumes from the U.S. An additional 8.7 mln tonnes was shipped to Central and South America, including the Caribbean. These volumes have not changes significantly in recent years, and often are carried on smaller sized vessels”, Banchero Costa concluded.
Nikos Roussanoglou, Hellenic Shipping News Worldwide

Previous: 2020 freight rate negotiations will be as tough as necessary
Next: Tanker Market Rates 30/12/2019