As part of the JDP, SHI developed the concept and basic design for the Hydrogen Cargo Containment System (Membrane Type) and 160K CBM liquefied hydrogen carrier concept design. LR reviewed the concept design to determine its suitability and risks in accordance with LR Rules and Regulations for the Classification of Ships. 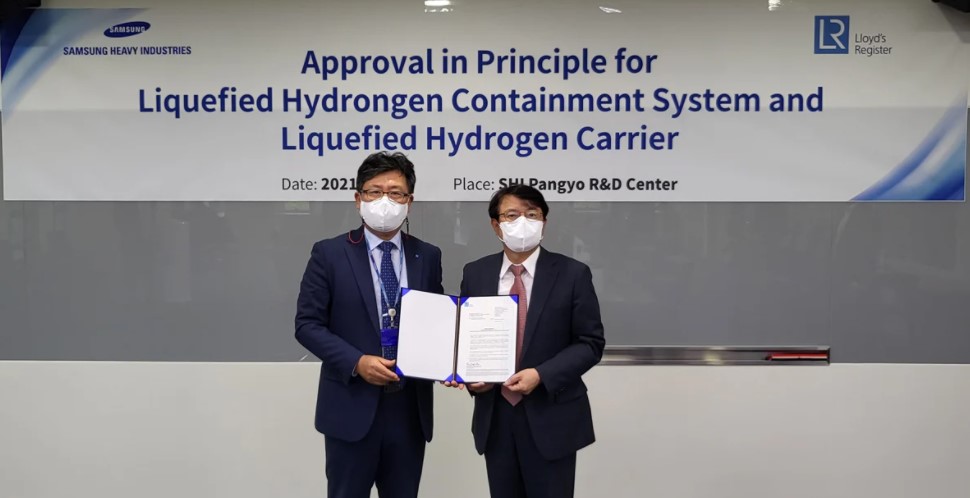 Mark Darley, LR’s Marine and Offshore Director, commented: “Lloyd’s Register continues to work with industry partners to make deep-sea zero-carbon vessels a reality within this decade. We’re proud to award Approval in Principle to Samsung Heavy Industries for its 160,000 CBM liquefied hydrogen carrier. This demonstrates LR’s commitment to helping the industry to adopt safe, reliable and economic new technologies and processes and to leveraging the cargo opportunities of hydrogen economies and is part of our wider commitment to supporting the industry’s own energy transition with our ability to deliver risk-based certification across shipping’s potential energy mix, including for methanol, ammonia and hydrogen as fuel.”

Dong-Yeon Lee, Vice President at SHI, said: “This is a significant milestone for Samsung Heavy Industries and demonstrates our commitment to the maritime industry by developing an efficient solution to transport large amounts of hydrogen in a safe and economical way. We hope to play a leading role in revitalising the hydrogen industry ecosystem.”

The AiP was awarded on 21 October 2021 during a presentation at SHI Pangyo R&D Centre in Korea, in the presence of Dong-Yeon Lee, Vice President at SHI and Young-Doo Kim, North East Asia TSO Manager at LR.
Source: Lloyds Register