November was the worst month for oil indexes in a decade due to fears of oversupply and slowing demand growth. However in the beginning of the week oil and fuel prices have turned into firm upward evolution as growing expectations that major producers, led by Saudi Arabia and Russia, will agree some form of production cut at a key meeting of OPEC ministers on Dec. 06-07 boosted sentiment.

MABUX World Bunker Index (consists of a range of prices for 380 HSFO, 180 HSFO and MGO at the main world hubs), finally have followed general trend on global oil market and also have risen in the period of Nov.30 – Dec.06:

The Organization of the Petroleum Exporting Countries meets on Dec.06 in Vienna to agree output policy and will discuss its strategy with producers outside OPEC, including Russia. OPEC and its allies are working towards a deal to reduce output by at least 1.3 million barrels per day (bpd) and they were still talking to Russia about the extent of its production cuts. How-ever Saudi Oil Minister Khalid Al-Falih said it was too soon to be certain that OPEC and other oil exporters would cut production because the terms of a deal remain unresolved.

Helping OPEC in its efforts to rein in emerging oversupply was an order on Dec.02 by the Canadian province of Alberta for producers to scale back output by 325,000 bpd until excess crude in storage is reduced.

Saudi Arabia is aiming to cut oil production in order to boost prices, but the recent vote by the U.S. Senate to end the war in Yemen, even if it doesn’t become law, heightens the pressure on Riyadh. That gives President Trump more leverage as he demands lower oil prices from Saudi officials. Saudi Arabia faces a choice between accepting painfully low oil prices or defying Washington by cutting production.

Russia has started to concede that it needs to join a fresh Saudi-led oil production cut, but is still discussing with its key partners in OPEC over how much, how fast, and for how long it would potentially reduce its oil output. Meantime, Russia’s energy ministry is discussing potential oil production cuts with local producers. Most experts agreed that Russia can’t immediately reduce production and if it joins the cuts, it will cut output gradually, like it did the previous time.

At the same time, the November data showed Russia’s oil production had fallen to 11.369 mil-lion barrels per day, an almost half a percentage decline from the record highs Russia kicked out in October of 11.41 million bpd. Production had previously been steadily increasing for months as Saudi Arabia and Russia attempted to lift production to make up for Iranian losses that most expected from the U.S. sanctions. The slip in production for November is not seen as a deliberate attempt to curb production to balance the market, but more as the natural consequence of issues with specific oilfields, and possibly from seasonality.

A proposed U.S. legislation that could establish the way for suing OPEC for market manipulation is a big concern among the cartel. Such legislation would make OPEC subject to antitrust laws by removing a state immunity shield created by judicial precedent. Given U.S. President Donald Trump’s continued criticism of OPEC and the way the cartel manipulates the oil market and prices, OPEC members are concerned that the legislation may pass this time around. OPEC is also said to have urged all its members not to mention specific oil prices, and to instead stick to the market stability narrative in public comments about oil policies to avoid the risk of potential U.S. antitrust lawsuits for manipulating the market.

Qatar is withdrawing from the OPEC as of January 2019. The decision came after Qatar, one of OPEC’s smallest producers but the world’s largest liquefied natural gas exporter, reviewed ways to enhance its role internationally and plan long-term strategy, including focusing on its gas industry. Doha is an influential player in the global LNG market with annual production of 77 million tonnes per year, based on its huge reserves of the fuel in the Gulf. It was also reported that the decision was not linked to a political and economic boycott of Qatar imposed since June 2017 by OPEC’s de facto leader Saudi Arabia and three other Arab states.

Iran said that the United States will not be able to stop Iran exporting its oil and any move to prevent Iranian crude shipments passing through the Gulf would lead to all oil exports through the waterway being blocked. Iran also warned the European Union that it could exit the 2015 nuclear deal if it does not begin to see some of the benefits from European efforts to rescue the accord. The United States has imposed sanctions on Iran and U.S. officials say they aim to reduce Iran’s oil exports to zero in a bid to curb the Islamic Republic’s missile program and regional influence.

The Trump-Xi negotiations in Argentina G20 meeting had a favourable effect on prices. The U.S. will still keep in place $200 billion of tariffs on Chinese imports but will not increase those tariffs from 10 percent to 25 percent after the start of the year as originally planned. The deal will also keep, at least for now, Trump from placing another $267 billion worth of Chinese goods under tariffs. Washington and Beijing said they will try to achieve a permanent deal with-in the next 90 days. China, for its part, also agreed to offset its massive trade imbalance with the U.S. by buying more, but not yet specified amounts, of energy products, agricultural, industrial and other products. However the U.S. still has significant leverage: if a formal deal can’t be reached then it will hike tariffs to 25 percent, which could roil global stock markets, stagnate global economic growth, dampen oil demand growth and possibly lead to a recession across the globe, particularly in emerging economies.

US production for the week ending November 30 continues to weigh on prices, averaging 11.7 million bpd for the third week in a row and the highest production rate for the United States. It was also reported a 3-rig decrease for oil and gas in the United States last week. The total number of active oil and gas drilling rigs now stands at 1,076, with the number of active oil rigs in-creasing by 2 to reach 887. The oil and gas rig count is now 147 up from this time last year, 138 of which is in oil rigs.

A major catalyst for fuel prices to rebound from current levels could be the OPEC/non-OPEC meeting on December 6-7, at which the cartel and allies may announce a fresh production cut to stop the price decline, and to stabilize markets. We expect new production cut will be finally fixed so that bunker prices will have a chance to continue upward evolution. 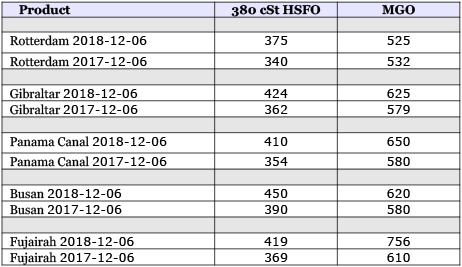