MABUX World Bunker Index (consists of a range of prices for 380 HSFO, VLSFO and MGO (Gasoil) in the main world hubs) fell slightly on Dec.02:

Comparison between the Market Bunker Price Index (MBP) vs MABUX Digital Bunker Price Index (DBP) in the four major hubs on Dec.02 still showed slight overcharging of 380 HSFO and VLSFO bunker fuels in all selected ports, with the exception of Rotterdam (380 HSFO fuel at the port was undervalued by 6.00 USD on Dec.02), while MGO LS prices were undervalued in all ports except Houston (plus 14 USD). 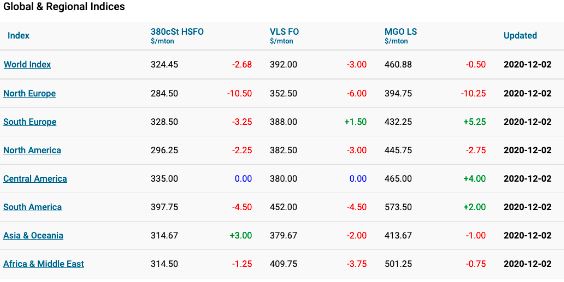 Meantime, world oil indexes rose slightly on Dec.02 as the market awaited a pact from producers on output.

Brent for February settlement rose by $0.83 to $48.25 a barrel on the London-based ICE Futures Europe exchange. West Texas Intermediate for January delivery increased by $0.73 to $45.28 a barrel on the New York Mercantile Exchange. The Brent benchmark traded at the premium of $2.97 to WTI. Gasoil for December delivery gained $4.25 – $390.50 .

OPEC+ postponed a decision on its next steps until Dec.04 after talks proved harder than expected. It was expected the group to extend its current agreement by three months or so, rather than allowing the cuts to taper beginning in January. However, some members are itching to increase production. Russia has suggested easing by 0.5 mb/d each month beginning in January. At the same time, the UAE is uncomfortable with low compliance levels of other members.

Middle East producers led by Saudi Arabia are widely expected to raise their official selling prices for January loading crude in December, although the outcome of the OPEC and non-OPEC meetings in coming days could affect the size and even the direction of any price change. Saudi Aramco is expected to raise the price of medium, sour Arab Light for January by 50-60 cents/b from December.

Fitch Ratings has revised its global shipping sector outlook to stable, reflecting improving fundamentals for container shipping and dry bulk, albeit a relatively weak tanker segment. Prudent capacity management, particularly in container shipping, should enable operators to benefit from a partial rebound in demand across freight categories in 2021 based on our current expectations for a global economic recovery. Developments in emissions regulations by the International Maritime Organization (IMO) or EU could affect the medium-term outlook for sector cost structures and the earnings capacity of relevant shipping segments.

Fifteen countries in the Asia-Pacific region—including China and Australia—recently signed the world’s newest and largest trade pact. The Regional Comprehensive Economic Partnership (RCEP) Agreement is set to gradually reduce and, in some cases, eliminate, trade tariffs on goods, including commodities. The pact could further sideline U.S. exporters of energy (incl. LNG) to the world’s most resource-thirsty region.

Gazprom will attempt to restart construction on the Nord Stream 2 pipeline, which has been held up for a year due to U.S. sanctions. Forecasts believe that Russia has the ability to complete the project. Sanctions have targeted pipelaying vessels, which have complicated Russia’s construction effort.