MABUX World Bunker Index (consists of a range of prices for 380 HSFO, VLSFO and MGO Gasoil) in the main world hubs) decreased on Dec.21: 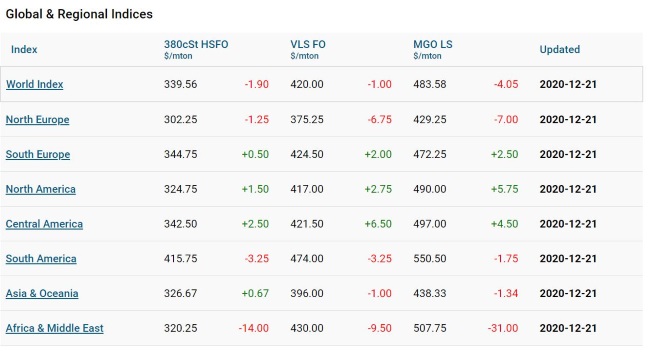 Correlation between the Market Bunker Price Index (MBP) vs MABUX Digital Bunker Price Index (DBP) in four major hubs on Dec.21 showed undercharging of 380 HSFO bunker grades in Singapore (-6 USD) and Rotterdam (-20 USD) and overcharging in other selected ports. At the same time, VLSFO is also undercharged in Rotterdam (-7 USD) and Singapore (-15 USD) while in Fujairah and Houston it is overcharged. MGO LS remained undervalued in all ports except of Houston (+ 10 USD).

Meantime, world oil indexes fell on Dec.21 as the discovery of a new strain of the Covid-19 virus prompted fears of tougher lockdowns in the near term.

Brent for February settlement decreased by $1.35 to $50.91 a barrel on the London-based ICE Futures Europe exchange. West Texas Intermediate for February fell by $1.13 to $47.97 a barrel on the New York Mercantile Exchange. The Brent benchmark traded at the premium of $2.94 to WTI. Gasoil for January delivery lost $19.25.

Today oil indexes continue to decline as a new strain of the novel coronavirus in the United Kingdom triggered concerns over fuel demand recovery.

Over the weekend, the U.K. government had abruptly reversed its plans to relax restrictions on social gatherings over the Christmas period, instead instituting a new and tougher regime for south-east England, where the new strain of the virus is concentrated. That region includes the capital London.

The UK government also warned that a new variant of the virus seemed to be spreading much faster than previous kinds. In response to this India, Pakistan, Russia, Jordan and Hong Kong joined European countries in suspending travel from Britain, and Saudi Arabia, Kuwait and Oman closed their borders completely. There is no evidence yet to suggest that the new strain is more virulent or resistant to the vaccines that are working their way through the global regulatory process.

Despite renewed fears about oil demand due to the new coronavirus strain, the leader of the non-OPEC group in the OPEC+ pact, Russia, is still in favor of another 500,000 bpd increase in the alliance’s oil production from February.

At the same time, OPEC+ will take a more hands-on approach to global oil markets now that it plans to meet more frequently. There are some thoughts that the market is still not recovered and is still extremely volatile. That is why OPEC+ members decided to meet monthly. Earlier this month, OPEC+ members agreed to start raising their combined oil production by half a million barrels daily from next month, to continue until April. This decision was widely seen as a compromise between the more aggressive backers of further deep cuts such as Saudi Arabia and those eager to restart production growth such as Iraq and Russia.