Fuel Market sentiment has received recently a boost from signs of improving demand from Asia’s large crude oil importers, as well as news of successful COVID-19 vaccine trials that may help contain the global pandemic and revive oil and fuel demand.

The Global Scrubber Spread (SS) (price difference between 380 HSFOs and VLSFOs) has also followed general upward evolution in November: it has widened by 4.95 USD and averaged USD 57.41 (52.46 USD a week ago).

November results of collation between the Market Bunker Price Index (MBP) vs MABUX Digital Bunker Price Index (DBP) in the four major hubs (Rotterdam, Singapore, Fujairah and Houston) still showed slight overcharging of 380 HSFO and VLSFO bunker fuel in all ports selected, while MGO LS prices were undervalued in Rotterdam in November by average 9 USD and in Singapore – by average 21 USD.

Japan, South Korea and a number of international shipping groups have warned the European Union against its plan to add greenhouse gas emissions from the maritime sector to Europe’s carbon market. As the 27-country EU seeks to steer its economy towards “net-zero” emissions by 2050, the executive European Commission wants to expand its carbon market to shipping. The opposition side warned that adding shipping to Europe’s carbon market could stoke trade tensions, and cause extra emissions by prompting ships to take longer routes to avoid stops in Europe.

The Shanghai International Energy Exchange (INE) is considering using oil storage sites in Singapore owned by PetroChina Co as a delivery point for its low-sulphur fuel oil futures contract. The INE’s move would be the first time a Chinese futures contract would be deliverable outside of China and could boost liquidity for the contract, as well as help to influence pricing for shipping fuel. 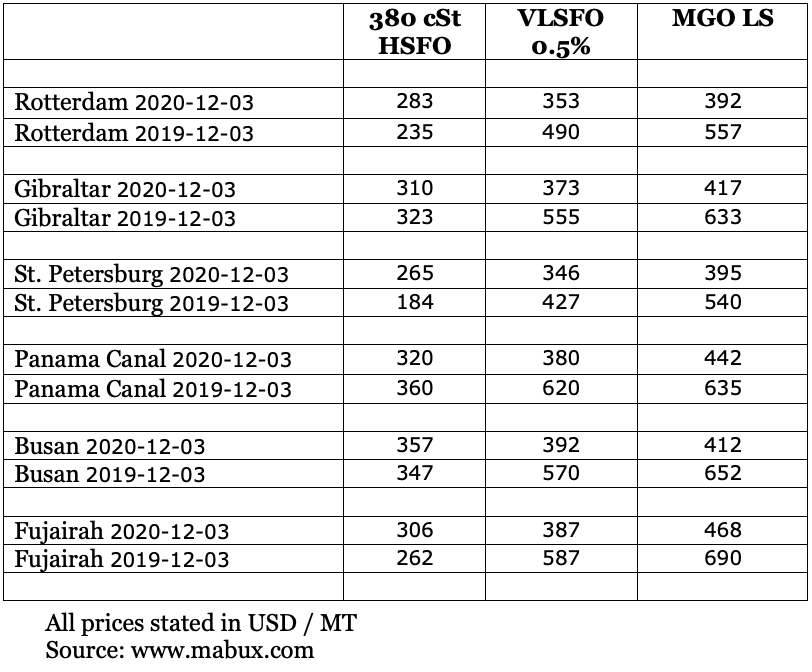 VPS reported, the collapse in air and road travel has led to jet and motor fuels finding their way into the bunker pool, raising the volatility of all shipping fuels. When jet, gasoline and diesel are blended with marine fuels, it raises the prospect of lower flashpoints and with it the risk of fire on vessels. 17 of the 38 bunker alerts released by VPS in 2020 have been for flashpoint: the company has seen nine such alerts for marine gasoil, five for VLSFO and three for HSFO.
Source: MABUX

2020-12-04
hellenicshippingnews..
Previous: Steel makers hike hot-rolled coil prices by 6%
Next: 47% Of All Newbuilt Dry Bulkers Delivered In 2020 Are Fitted With A Scrubber