The Global Scrubber Spread (SS) weekly average – the price difference between 380 HSFO and VLSFO – unexpectedly increased over the week – for the first time in the last three weeks – plus $8.64 ($210.47 vs. $201.83 last week). At the same time, in Rotterdam, the SS Spread’s average value, on the contrary, showed a significant decrease, falling below $ 200: $ 184.83 versus $ 217.33 (minus $ 32.50 compared to last week). This is the first drop of SS Spread in Rotterdam in the last five weeks. In Singapore, the average price difference of 380 HSFO/VLSFO showed growth, exceeding again the psychological mark of $100: $121.83 vs. $94.67 (up $21.76 compared to last week). SS Spread values do not have any firm dynamics. More information is available in the Price Differences section of mabux.com. 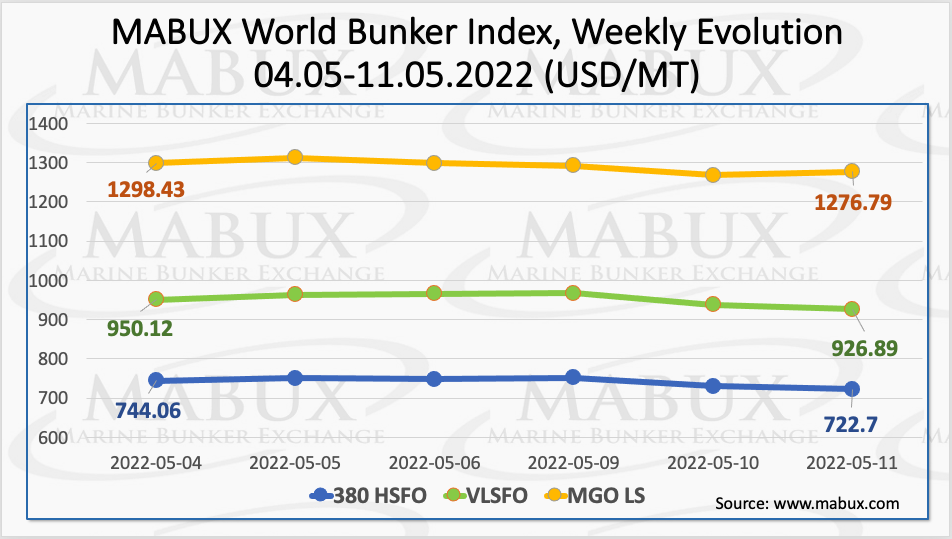 Gas prices in Europe remain at record levels amid the ongoing escalation of the conflict in Ukraine and concerns about the possible ban on Russian gas import. Price for LNG as bunker fuel in the port of Sines (Portugal) on May 09 was at the level of 2009 USD/MT. LNG prices are still significantly higher than those of traditional bunker fuels. The MGO LS price at the same port on May 09 was quoted at 1367 USD/MT.

Over the Week 19, the average correlation trend of MABUX MBP Index (market bunker prices) vs MABUX DBP Index (MABUX digital bunker benchmark) did not change: all major bunker fuel grades are in the overcharge zone in all selected ports. Thus, 380 HSFO fuel’s overcharge margins in a week were: in Rotterdam – plus $ 29 (plus $ 40 at the end of the last week), in Singapore – plus $ 114 (plus $ 125), in Fujairah – plus $ 107 (plus $ 96) and in Houston, plus $102 (plus $115). In the 380 HSFO segment, MABUX MBP/DBP Index (MBI) did not have a single trend: in Rotterdam, Singapore and Houston, the overprice premium dropped, in Fujairah – rose.

VLSFO fuel grade, according to MBI, was also overpriced at all selected ports: plus $42 (plus $99 a week earlier) in Rotterdam, plus $51 (plus $48) in Singapore, plus $66 (plus $58) in Fujairah and plus $50 (plus $99) in Houston. Here MBI also did not have a firm trend: the overcharge decreased in Rotterdam and Houston, and increased in Singapore and Fujairah. 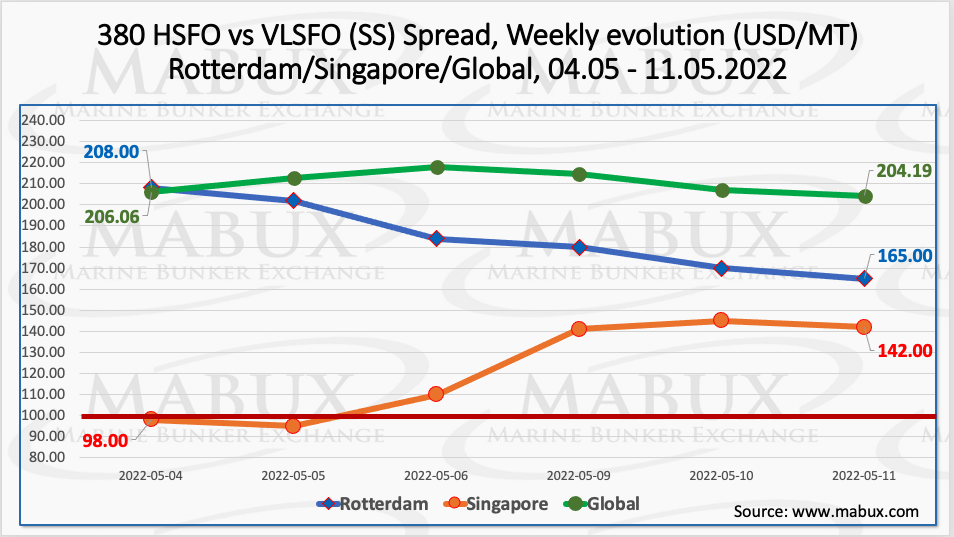 Brussels-based Transport & Environment (T&E) has detailed what it believes needs to be included in the FuelEU Maritime proposal to increase the uptake of green hydrogen in shipping. First of three recommendations: T&E called for a 6% mandate of green hydrogen-based fuel to be used in European Union shipping by 2030 under the draft FuelEU Maritime Regulation. In its second recommendation, T&E proposed to advance European Commission (EC)-proposed regulatory targets by five years and set 2050 as the sunset date for the last use of GHG emitting fuels. Finally, T&E called for the application of a multiplier of five to the use of green H2(-based fuels) in shipping under the FuelEU Maritime Regulation. ‘Multiplier functions like a “discount” system allowing the use of each tonne of green H2 (based fuels) count five times towards achieving the regulatory targets,’ explained T&E. ‘In practice, this helps to fully bridge the cost-gap between green H2 (based fuels) and fossil fuels.’Multipliers, said T&E, should only apply to volumes used above the sub-quota in order to provide additional incentives to shipowners/operators to switch to green H2-based fuels.

We do not expect any firm trend in the global bunker market in the near-term outlook. Next week, bunker indices are likely to continue irregular fluctuations.
Source: By Sergey Ivanov, Director, MABUX