MABUX: Bunker Prices to Continue Their Downward Trend Next Week 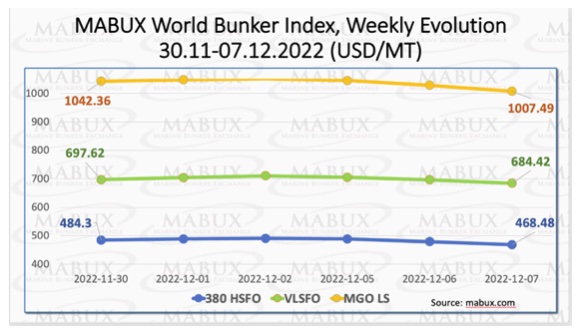 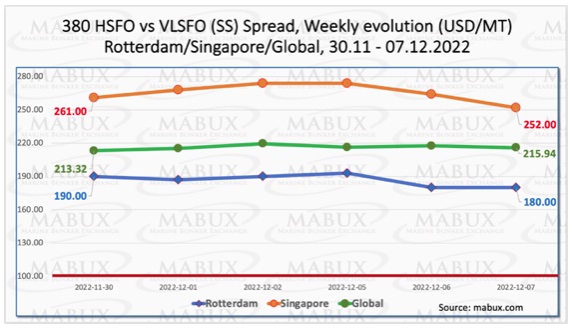 Europe’s natural gas demand in November fell by nearly a quarter compared to the five-year average for the month. High prices are clearly driving demand destruction, with industrial demand seeing the largest decrease. Despite that, cold weather and lower-than-normal nuclear and wind power generation are sending gas prices climbing.

Over the Week 49, the MDI index (comparison of MABUX market bunker prices (MBP Index) vs MABUX digital bunker benchmark (DBP Index)) showed underestimation of 380 HSFO fuel grade in all four selected ports. The underprice premium increased slightly: in Rotterdam – minus $ 127, Singapore – minus $133, Fujairah – minus $193 and Houston – minus $69.

In the VLSFO segment, according to MDI, Singapore and Fujairah remained overvalued: plus $49 and plus $25, respectively. In Rotterdam and Houston, this fuel grade was underestimated by average minus $46 and minus $5. Underpricing decreased, while overpricing rose slightly.

In the MGO LS segment, MDI continued to register fuel underpricing in two out of four selected ports: Rotterdam – minus $67 and Houston – minus $55. Singapore and Fujairah remained overpriced: plus $8 and plus $146, respectively. The undercharge premium, as well as overcharge one, according to MDI, have decreased slightly.

A total of 3,840 vessels called the Port of Gibraltar during first 10 months of the year – 21.7% down on the 4,904 registered in the same period in 2021. Port operations, including bunkering, were halted following the grounding of the OS 35 bulk carrier at the end of August. On 7 September the Port of Gibraltar announced that non-bunkering operations were poised to resume while on 22 September it was reported by GAC that alongside bunkering had resumed. Accordingly, there were 209 calls for bunkers in September – the lowest monthly total of the year and 286 fewer than the 495 recorded in September 2021. On 25 November, the Gibraltar Port Authority (GPA) announced that a technical proposal for the removal of the OS 35 and all its contents had been agreed in principle. There were 119 commercial ship-to-ship operations in the period. In contrast, during the first 10 months of the 2021, there were just 16.

DNV reported, seventeen LNG-fuelled vessels were added to the global order book in November with container vessels and car carriers constituting nearly two thirds of the new contracts, Total orders for LNG fuelled ships for the year to date have now reached 203, while methanol fuel orders have reached 35. As per DNV comments, ‘with the preliminary agreement at the EU last week that shipping will be included in EU ETS starting from 2024, all low-carbon options now make even more sense. Methane emissions will also be included, so methane slip from engines will come under even greater scrutiny.’

The price cap on Russian oil, imposed by the European Union on December 05, has not yet had a significant impact on world bunker indices so far. The Global fuel market is waiting for Russia’s reaction to the imposed restrictions. We expect the downward trend in the global bunker market to continue next week.
Source: By Sergey Ivanov, Director, MABUX