The Global Scrubber Spread (SS) weekly average – the price differential between 380 HSFO and VLSFO – continued its moderate decline for the sixth straight week – minus $15.19 ($237.74 vs. $253.03 last week). In Rotterdam, the average SS Spread dropped more considerably to $212.50 from $238.00 (down $25.50 from last week). However, the biggest decline in the average weekly price differencial of 380 HSFO/VLSFO remains in Singapore:
minus $33.33 ($242.00 vs. $275.33 last week). In general, the SS Spread ratio is gradually approaching the $200 mark, but it is unlikely to break this mark in the short term. More information is available in the Price Differential section on mabux.com. 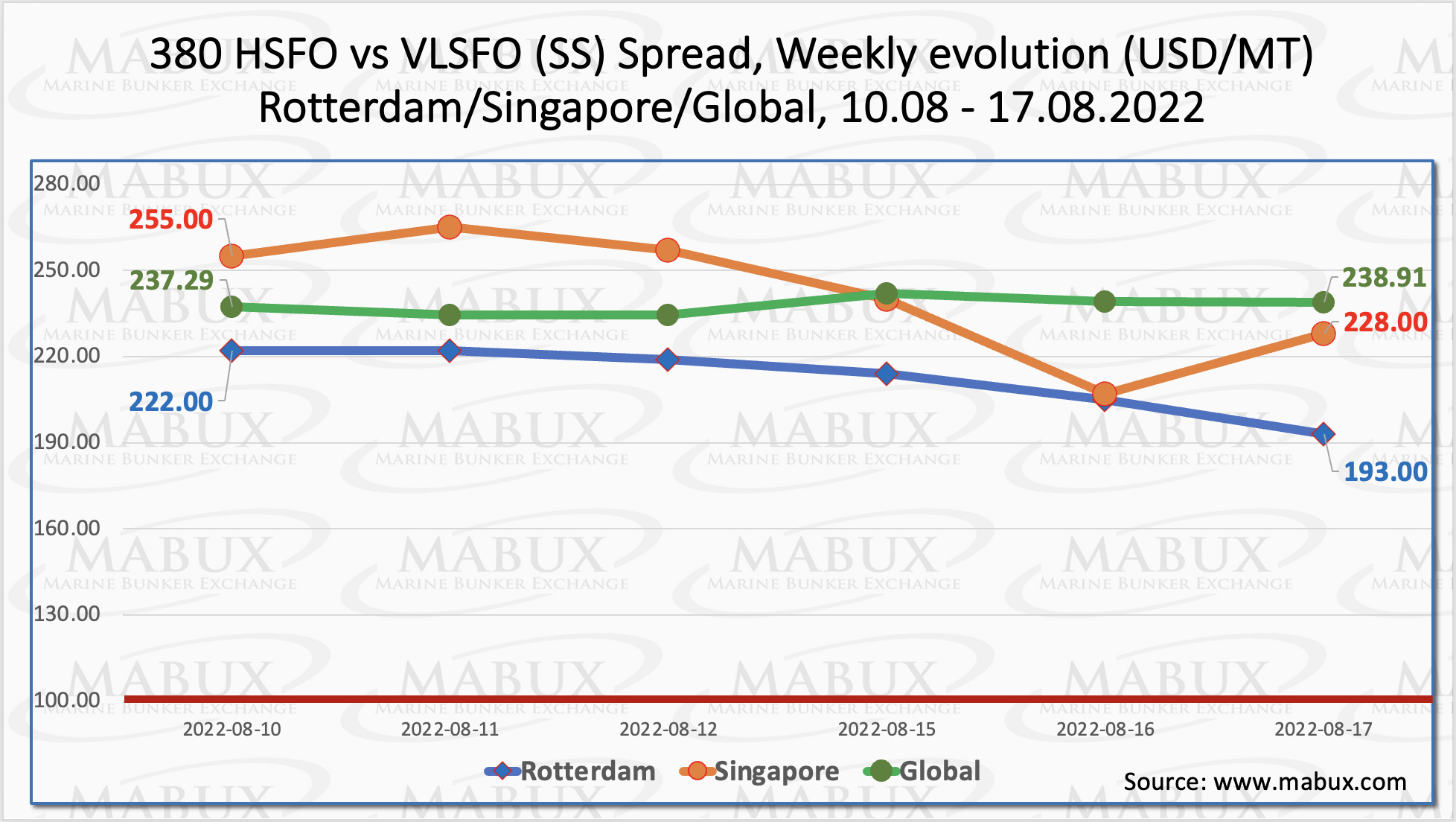 Over the Week 33, the MDI index (comparison MABUX MBP Index (market bunker prices) vs MABUX DBP Index (MABUX digital bunker benchmark)) showed an undervaluation of 380 HSFO fuel in three of the four selected ports: Houston still remains the only overestimated hub: plus $43 ($18 reduction from last week). In other ports, the fuel underestimation moderately decreased and amounted to: Rotterdam – minus $35, Singapore – minus $67 and Fujairah – minus $183.

VLSFO fuel grade, according to MDI, remained, on the contrary, overpriced in all four selected ports: plus $44 in Rotterdam, plus $66 in Singapore, plus $135 in Fujairah and plus $54 in Houston. Here, the MDI index still did not have firm dynamics: the overpricing premium rose in Rotterdam but decreased in the other three ports. VLSFO is still the most overvalued fuel on the global bunker market.
As for MGO LS grade, MDI index registered a fuel overcharge in two out of four selected ports: Fujairah – plus $ 229 and Houston – plus $ 4. Rotterdam and Singapore are still underestimated: minus $ 15 and minus $ 48, respectively. The underestimation premium did not virtually change over the week. Overcharge fell in Houston but remained unchanged in Fujairah. 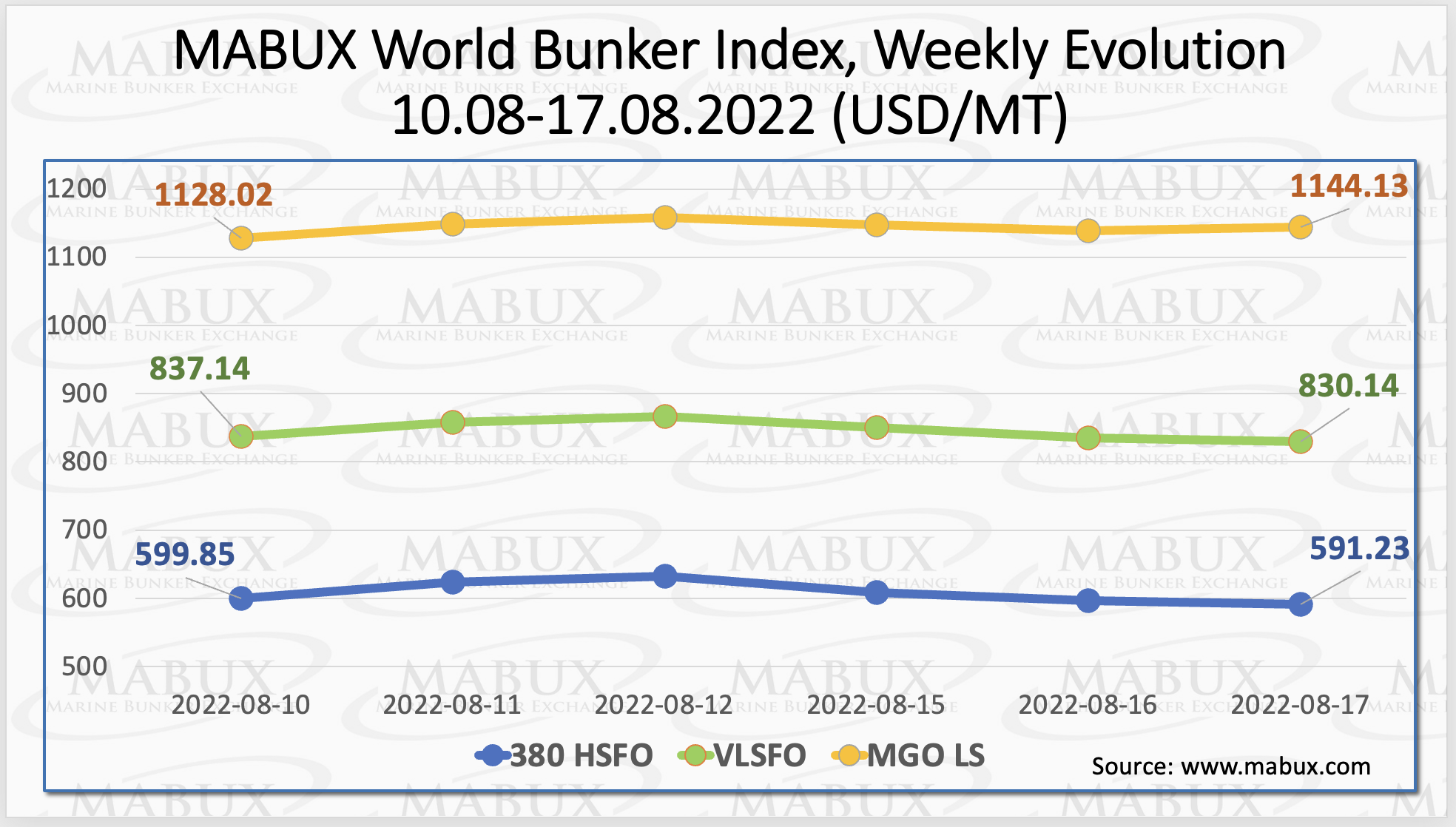 Sales of marine fuel have risen in Panama for a second successive month. Some 448,037 metric tonnes (mt) of marine fuel were sold at the Central American bunker hub in July – 14,064 mt more than the 433,973 mt registered in June, Very low sulphur fuel oil (VLSFO) sales (316,311 mt) rose 22.5% on the month and 14.8% on the year. Despite the rise in overall bunker sales, there was a sharp drop off in sales of high sulphur fuel oil (HSFO), which dipped below the 100,000 mt mark for only the second time this year. The 69,060 mt of recorded sales was the lowest monthly total of 2022 and the lowest since the 64,637 mt registered in December 2021. The decline in HSFO sales was partly offset by sales of low sulphur marine gasoil (LSMGO). The 51,533 mt of sales for the distillate grade was the highest monthly total of 2022. A total of 639 vessels were bunkered in July, two more than in June and 73 more than in July 2021.

Meantime, Singapore bunker sales reach 2022 high. The 4,120,600 metric tonnes (mt) of marine fuel sold at the Port of Singapore in July. Sales of very low sulphur fuel oil (2,009,100 mt) – which accounted for almost half of bunker sales last month – exceeded the 2 million mt mark for the second time the year. The 1,255,300 mt of high sulphur fuel oil sales – the highest monthly total of 2022 – also contributed to a 9.8% month-on-month (m-o-m) increase and 1.4% year-on-year (y-o-y) uplift in bunker sales in July. There were 3,181 calls for bunkers last month, 241 up on the 2,940 recorded in June but 113 fewer than the 3,294 registered in July 2021.
We expect moderate irregular fluctuations to prevail on the global bunker market next week.
Source: MABUX (By Sergey Ivanov, Director)

Previous: Aviation and Shipping: So Close, Yet So Far
Next: Container fleet growth up 11.6% from June 2019, catching up with transport demand