MABUX: Downward Trend of Bunker Prices to Continue Next Week

Natural gas prices in Europe remain at their highest levels. LNG as a bunker fuel in the port of Sines (Portugal) decreased on August 8 by a symbolic 10 USD/MT to 3013 USD/MT (versus 3023 USD/MT a week earlier). LNG prices are well above the cost of the most expensive fossil bunker fuel: the price of MGO LS in the port of Sines was quoted at 1179 USD/MT on August 08. 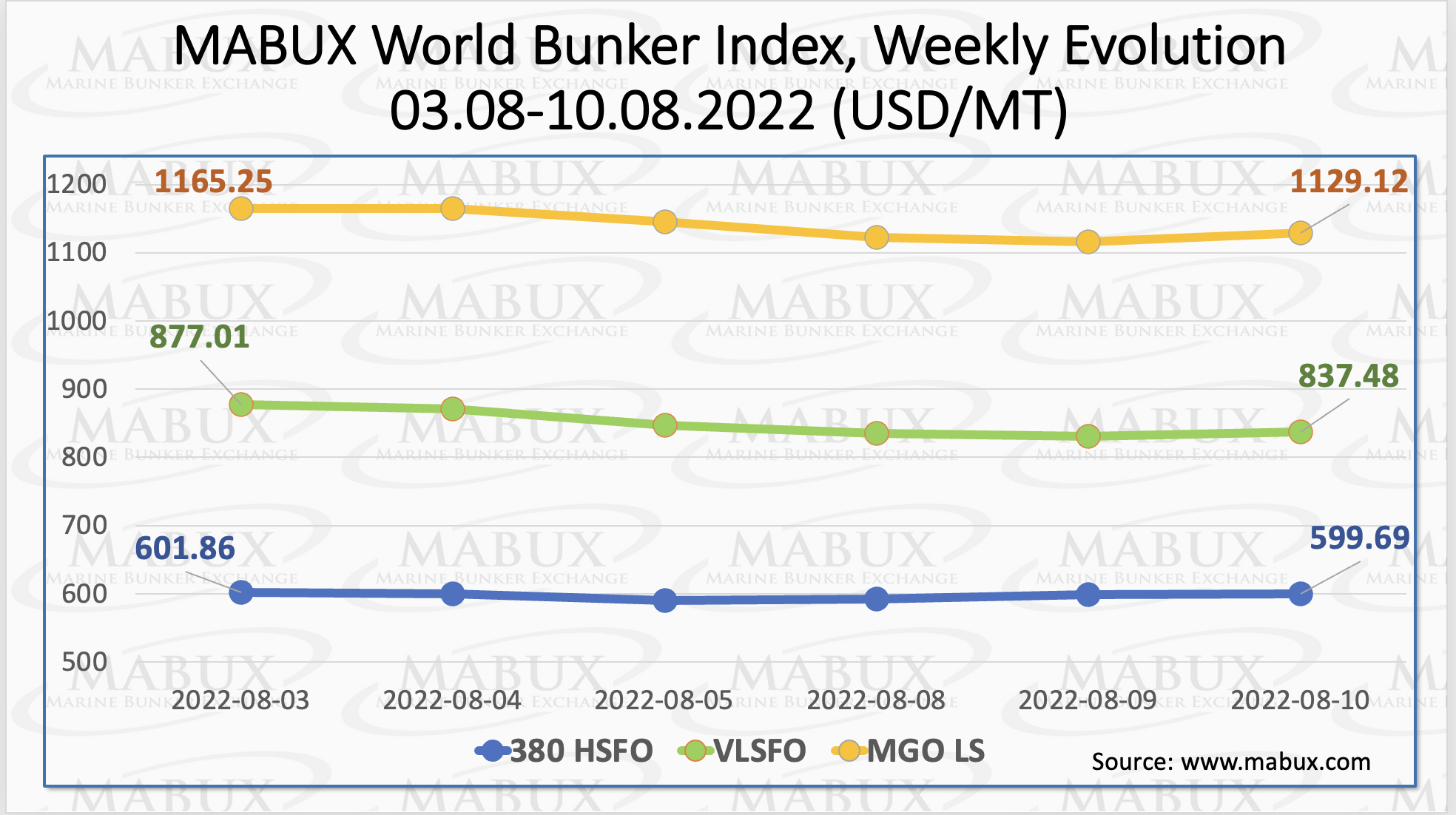 Over the Week 32, the MDI index (comparison of MABUX MBP Index (market bunker prices) vs MABUX DBP Index (MABUX digital bunker benchmark)) showed an undercharge of 380 HSFO fuel in three out of four ports selected: Houston remains the only overestimated port: plus $6. In other ports, the underpricing decreased slightly and amounted to: Rotterdam – minus $68, Singapore – minus $92 and Fujairah – minus $121.

VLSFO fuel, according to MDI, remained, on the contrary, overpriced in all four selected ports: plus $37 in Rotterdam, plus $73 in Singapore, plus $166 in Fujairah and plus $76 in Houston. Here, the MDI index did not have a firm trend: the overcharge decreased in Singapore and Houston but rose in Rotterdam and Fujairah. VLSFO fuel is still the most overvalued segment in the global bunker market. 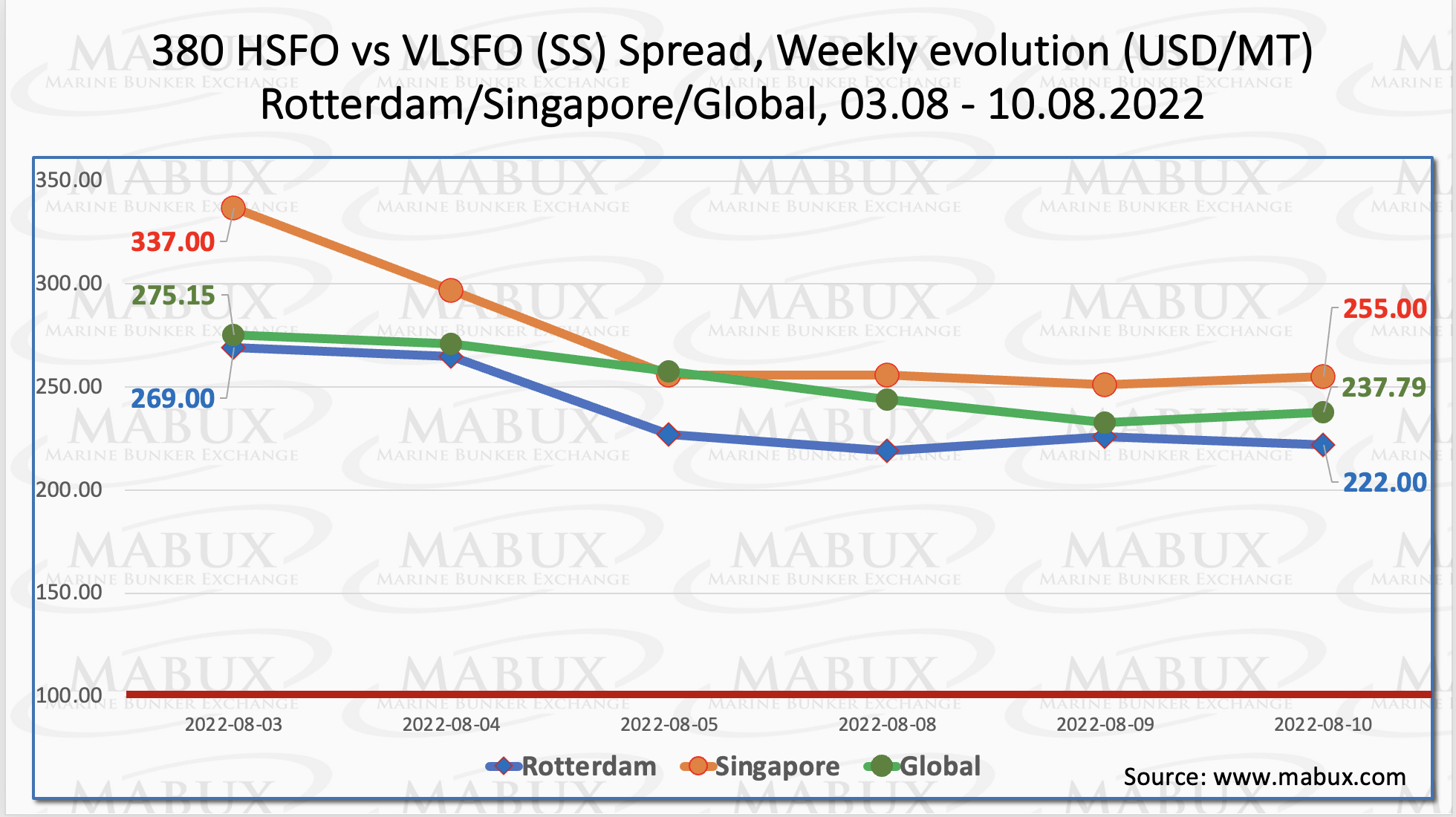 As for MGO LS grade, MDI index registered a fuel overcharge in two out of four selected ports: Fujairah – plus $ 229 and Houston – plus $ 39. Rotterdam and Singapore are still in the underestimation zone: minus $ 13 and minus $ 51, respectively. The underestimation premium did not virtually change over the week. Overpricing ratio rose in Fujairah but fell in Houston.

CO2 emissions from North American waterborne transportation was approximately 47 million tonnes in 2018, according to a new report released by the Blue Sky Maritime Coalition (BSMC). The report provides a current benchmark for CO2 emissions from the major vessel sectors that make up maritime transportation in North America. Of the total North American maritime-related emissions, the offshore support vessel fleet and the inland tug and push-boat fleets make up nearly 50% of all emissions. Coastal and harbour tugs and ferries make up another 14%, and tankers and articulated tug-barges contribute 6%.

FOBAS says is it is continuing to see more cases of contaminated bunker fuel in the ARA region – mainly in Rotterdam and Amsterdam – which suggests that the problem is an ongoing one. In June FOBAS said it had investigated a number of very low sulphur fuel oil (VLSFO) samples taken in the ARA region after reports that vessels using these fuels had experienced operational problems such as excessive wear of fuel pump plungers, barrels and fuel injectors. In a new bulletin issued this week, FOBAS said it had also seen a similar contamination case from Ulsan, Korea and a recent case with lower levels of the same contaminants from Singapore. Detailed analysis on these fuels has shown a range of compounds, more specifically, high levels of phenolic compounds. The fuel testing agency noted that phenol related compounds are often linked with fuel pump wear and damage.

The 21st Navigator Forum 2022 in the heart of Greek Seamanship