World oil index rally of the past two weeks continues, even though in a more tempered manner, on the back of U.S. commercial crude supplies shrinking, Russia starting to implement its OPEC/OPEC+ commitments and China promising to avert an economic slowdown. Meantime, weak Chinese and South Korean economic data and the International Monetary Fund (IMF) cutting its forecasts for the global economic growth to 3.5 percent in 2019 and 3.6 per-cent in 2020 revived concern over the global economy.

MABUX World Bunker Index (consists of a range of prices for 380 HSFO, 180 HSFO and MGO at the main world hubs), has demonstrated irregular changes in the period of Jan.17 – Jan.24:

Investment banks are warning that there is high uncertainty over where oil prices will go this year. Bearish unknowns include the pace of demand growth in view of the still unresolved U.S.-China trade war, the rate of global economic growth, and the pace of Chinese oil demand growth. Bullish factors include OPEC and allies’ deal succeeding again in drawing down inventories, and the U.S. not renewing waivers for Iranian oil customers when the current waivers expire in early May 2019. The forecasts expect Brent crude prices to average between $65 and $70 a barrel in the years 2019 through 2023, while for this year it may average $65 a barrel.

The International Energy Agency (IEA) said that the OPEC+ cuts that started this month likely put a floor beneath oil prices, but that it would still take time before the reductions could balance the oil market. The IEA also said that there is still less clarity over Russia’s intentions. The agency noted that Russia likely increased output in December to a new record high of 11.5 mil-lion bpd, while the cuts in January are likely going to be phased in slowly. Meanwhile, the IEA left its projection for U.S. production growth unchanged at 1.3 million bpd.

OPEC released its monthly Oil Market Report on Jan.17, revealing a roughly 751,000 bpd de-cline. Saudi Arabia slashed output by 468,000 bpd, Iran lost 159,000 bpd, and Libya lost 172,000 bpd. Smaller cuts came from the UAE (-65,000 bpd) and involuntary losses from Venezuela (-33,000 bpd). The largest gain come from Iraq, which added 88,000 bpd. The monthly totals occurred before implementation of the OPEC+ agreement, which calls for cuts of 1.2 mil-lion bpd from October’s baseline. As per OPEC, last year global demand gad grown by 1.5 million bpd and this year it would slow down to 1.29 million bpd, to hit 100.08 million bpd at the end of the year. The increase, although more moderate than in 2018, will likely be driven by Asian consumers, with India in the lead, followed by China.

Russia in turn said it cannot cut its oil production too quickly due to weather and geological conditions in the cold Russian winter. At the moment Russia is planning to reduce its oil production by 50,000 bpd to 60,000 bpd in January as part of the new OPEC+ deal, and will not be cutting its 228,000-bpd share outright at the start of the agreement. A timetable for how much oil production it would reduce each month until it reaches its share of the OPEC/non-OPEC production cut has already been drafted.

China reported that its fourth-quarter gross domestic product (GDP) grew at the slowest pace since the global financial crisis, easing to 6.4 percent on-year as expected from 6.5 percent in the third quarter. That pulled full-year growth down to 6.6 percent, the slowest annual pace since 1990. GDP in 2017 grew a revised 6.8 percent. However, analysts pointed to the fact that the slowdown was in line with expectations and simply reflected a normal part of the economic cycle. At the same time, Chinese crude oil refinery throughput in 2018 climbed to a record 12.1 million barrels per day, up 6.8 percent from the previous year.

Meantime, fuel prices were supported by signals from China and Japan that they would use fiscal spending to stimulate growth. These signs that major Asian economies will not let growth slow down too much gave some hope to oil/fuel market participants, easing concerns from earlier this week about the pace of global economic growth and by extension, global oil demand growth.

British Prime Minister Theresa May tried to break the Brexit deadlock on Jan.21 by setting out proposals in parliament that were focused on winning more concessions from the European Union. With just over two months until the United Kingdom is due to leave the European Union on March 29 there is no agreement in London on how and even whether it should leave the world’s biggest trading bloc. The EU, which has an economy more than six times the size of the United Kingdom, says it wants an orderly exit but senior officials have expressed frustration and sorrow at London’s deepening crisis over Brexit.

The Venezuelan opposition staged massive protests in dozens of cities across the country on Jan.23, putting President Nicolas Maduro in jeopardy. The protests came with the support of the U.S. government, which declared that President Nicolas Maduro was a usurper that had no legitimacy to the presidency. Other support came from regional powers, including Brazil, Chile and Colombia, as well as the Organization of American States (OAS). Guaido, the president of National Assembly, declared himself the rightful president of the country. The turmoil in Venezuela could lead to unexpected and sharp supply outages.

In the United States, energy companies cut the number of rigs drilling for oil by 21 in the week to Jan. 18, taking the total count down to 852, the lowest since May 2018. It was biggest decline since February 2016, as drillers reacted to the 40-percent plunge in U.S. crude prices late last year. However, U.S. crude oil production still rose by more than 2 million bpd in 2018, to a record 11.9 million bpd.

Meantime, according to the U.S. Energy Information Administration (EIA), the change in bunker fuel specification is expected to put upward pressure on diesel margins and modest upward pressure on crude oil prices in late 2019 and early 2020. EIA’s analysis indicates that the price effects that result from implementing new low-sulphur standard will be most acute in 2020 and will diminish over time. EIA also forecasts that the implementation of the new IMO fuel specification will widen discounts between light-sweet crude oil and heavy-sour crude oil, while also widening the price spreads between high- and low-sulphur petroleum products.

As per EIA, removing sulphur from residual oils or upgrading them to more valuable lighter products such as diesel and gasoline can be an expensive and capital-intensive process. Refineries have two options with regard to residual oils: invest in more downstream units to upgrade residual oils into more valuable products or process lighter and sweeter crude oils in order to minimise the production of residual oils and the sulphur content therein.

Outlook for the coming week

We expect bunker prices may continue irregular fluctuations with no firm trend next week. However, the key bearish concern – a possible global growth slowdown – could put downward pressure on the fuel indexes in a medium-term outlook. 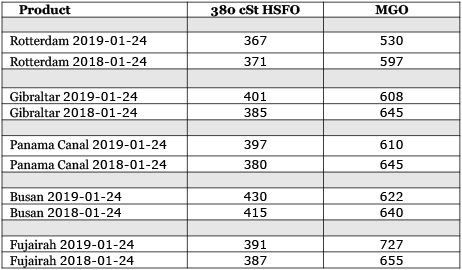