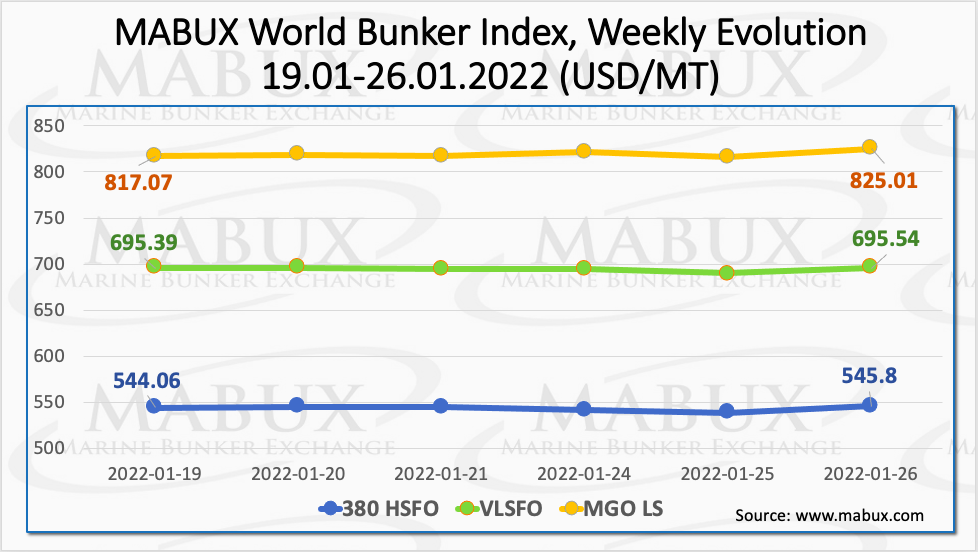 The situation on the European gas market has somewhat stabilized over the past week, although the threat of a conflict escalation Russia-Ukraine still keeps price indices high. The price of LNG as bunker fuel at the port of Sines (Portugal) on January 24 was 2333 USD/MT (up 18 USD compared to the previous week). The price of LNG still significantly exceeds the prices of traditional bunker fuels (MGO LS – 805 USD/MT as of 25.01).

On a Week 04, the correlation of MABUX MBP Index (Market Bunker Prices) vs MABUX DBP Index (MABUX Digital Bunker Prices (benchmark) showed that 380 HSFO fuel was overpriced in two ports out of four selected: in Rotterdam – plus $8 and in Houston – plus $ 19. In Singapore and Fujairah, the MABUX MBP/DBP Index registered an underpricing of 380 HSFO by $10 and $4 respectively. There were no significant changes in the MBP/DBP Index’s dynamics. 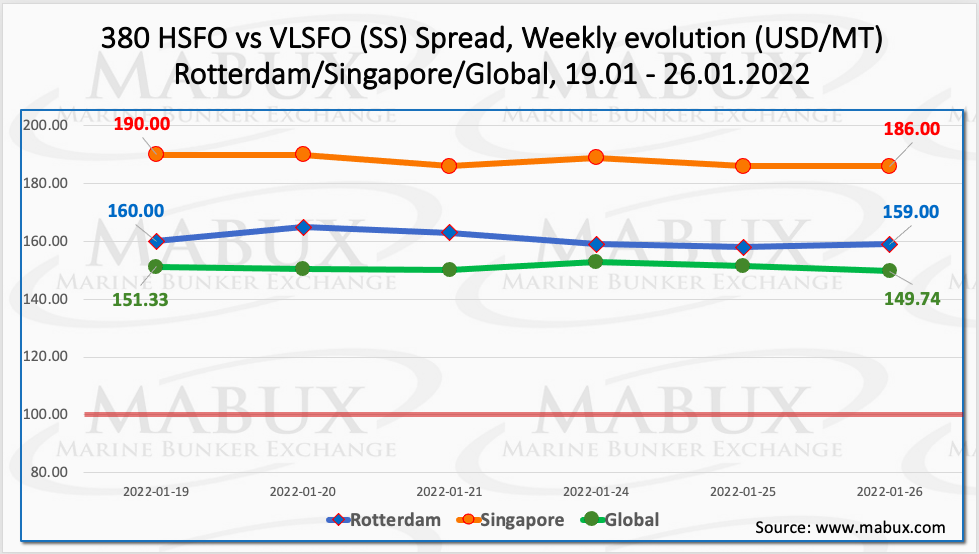 In a new white paper, TotalEnergies is forecasting global marine fuel consumption to increase to around 46 Petajoules (PJ)/d by 2050, with oil-based and LNG bunker fuels still accounting for some 21 PJ/d of demand. In its projections for what the marine fuel mix might look like in 2030 and 2050, the company is forecasting bunker demand to rise from the 32 PJ/d level in 2019, to 38 PJ/d in 2030 and 46 PJ/d in 2050. TotalEnergies also reiterates its support for LNG as a key component in shipping’s energy transition. It is forecasting that the LNG bunker market could reach 10 million tonnes by 2025 and suggests it may represent 10% of the bunker market by 2030. Biofuels and biogas will represent only a small part of bunker demand in 2030 and 2050, according to TotalEnergies. Biofuel will account for 1-2 PJ/d in 2030, climbing slowly to around 2.5 PJ/d in 2050. The take-up of biogas will be even less, coming in at under 1 PJ/d in 2030 and rising to around 2 PJ/d in 2050. Electricity is set to match biofuel demand by 2050, at around 2.5 PJ/d. The demand for hydrogen-based fuels, which covers H2, e-fuels (H2 + CO2), methanol and ammonia is expected to ramp up from around 1 PJ/d in 2030 to 17 PJ/d in 2050, which is still around 4 PJ/d behind the combined total of oil-based and LNG bunker fuels.
Source: By Sergey Ivanov, Director, MABUX

Wisdom Announces the Future of Maritime Solutions Summit in Partnership With the Port of Gdansk Authority, Featuring Excellent Industry Discussions and an Exclusive Site Visit